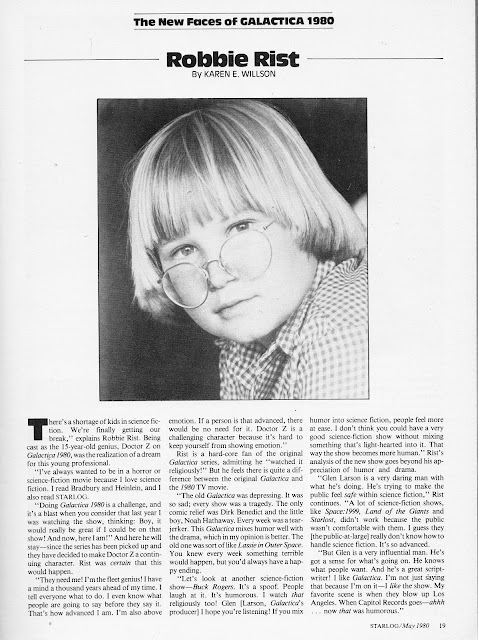 Robbie Rist was a familiar face on late-seventies US TV, making numerous cute-kid guest turns on a bunch of shows.  The miniature John Denver lookalike also has the distinction of playing two of the most loathed characters of the era: Cousin Oliver in the final six episodes of THE BRADY BUNCH (a new character who - probably very unfairly - is blamed by some for the demise of the legendary slice of seventies Americana) and - of course - Doctor Zee in the justifiably reviled GALACTICA 1980.

The Battlestar's resident Milky Bar Kid (and proto-Wesley Crusher) suddenly - without explanation - seemed to be calling the shots, leaving Adama to stand around and look confused.  Maybe it was the affect of the fumes from the glue holding his fake beard in place.

This interview (STARLOG 34, May 1980) was conducted before G80 returned as a - short-lived - weekly series.  And before Rist was shown the airlock, replaced by (James) Patrick Stuart (not that one!) for the remaining seven episodes.

I've no idea why they made the change.  It's not as if Stuart was any better or more experienced that Rist.  Nor did he do anything more interesting with the character.  My best guess is the sudden decision to go back into production with more episodes meant Rist was unavailable to reprise the role.

Amusingly, the change of actors created a problem when Universal's overseas operations had a final stab at milking the franchise with the faux feature film CONQUEST OF THE EARTH (the final part of the unofficial "Galactica Trilogy").  The movie clumsily combines several episodes of Galactica 1980 (Galactica Discovers Earth, Super Scouts and The Night the Cylons Landed), putting both Rist and Stuart on-screen.  The - ahem - creative solution, explained in some clumsy dubbing, is that Doctor Zee and Doctor Zen "occupy the same body". Really.

Rist and Stuart have both stayed in acting.  The former also seems to have made a career of supplying animation and computer game voices as well as being a musician.

The GALACTICA 1980 comic-book limited series, published by Dynamite Entertainment in 2009, offered an alternative take on the Galactica's first encounter with Earth.  In this re-imagined interpretation, Zee is portrayed as a ruthless, scheming little frackster. 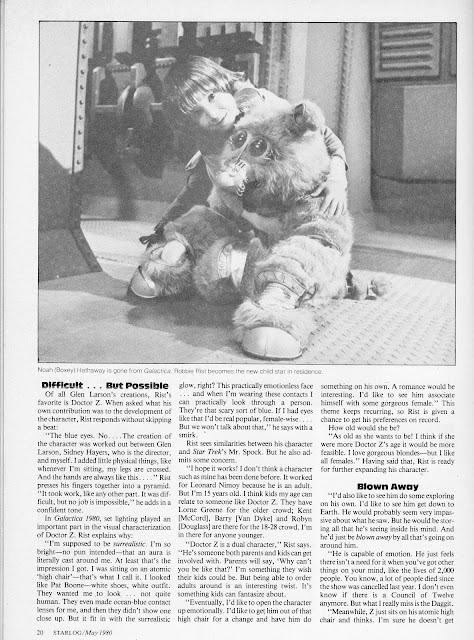 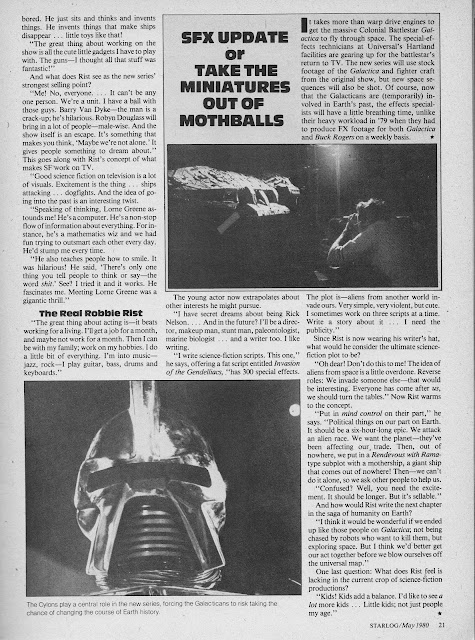