Here's another two pages of pre-launch plugging from the back of the DEATH'S HEAD II limited series (1993), previewing the upcoming launch of the Marvel UK sub-universe.

I re-read the DHII mini last week and I was struck that - apart from these pages - there's nothing in the main story to plug it into the about-to-open Genesis 92 line.  There's no attempt to preview any of these characters (and gawd knows, the fourth issue is packed with copious cameos by existing Marvel characters... although it's set it an alt. future 2020 so they're entirely superfluous) and MyS-TECH doesn't even rate a mention.

I also re-read the first issue of MOTORMOUTH, best described as a @?!!ing hybrid of TANK GIRL and SLIDERS, and although the idea is slight (dimension jumping trainers a.k.a MOPED units... really) and the whole "Fashion Police" shebang storyline strained, it was fun.  I did spot one mistake: the story appears to reach a natural conclusion, complete with 'next issue' tease... and then continues for several more pages before wrapping with another 'next issue' line on the real last page.  Someone in Arundel House's production department obviously wasn't paying attention to the paste-up and slipped-in the OVERKILL (where the stories were - of course - initially edited to minimise the inclusion of Marvel US characters) page with the first cliffhanger ending.  Whoops.

The MM (which always gets me thinking of the ITV Saturday Morning magazine show) series ultimately ran a year before before being cancelled.  M-UK were busy hatching plans for her returned when the whole Annex of Ideas started to collapse.  A planned REMOVAL MAN VS. MOTORMOUTH was announced but then placed on hiatus and ultimately cancelled.  Another series, MOTORMOUTH REMIX, was also scrapped pre-publication.  Remix was going to be a WHAT IT? type look at alternate iterations of Marvel characters.

Uncut versions of the early MM strips appeared in - of all places - THE EXPLOITS OF SPIDER-MAN monthly.

Harley Davis is distinguished amongst the Genesis 92 characters in that - unlike the others - she did secure a guest appearance in one of the 'proper' American Marvel books.  Most Atlantic crossings were strictly one way with numerous appearances by American characters in the UK books but little traffic heading in the opposite direction.  The exception was Harley's turn in Peter David's THE INCREDIBLE HULK 408 and 409 (August & September 1993). $*&! me! 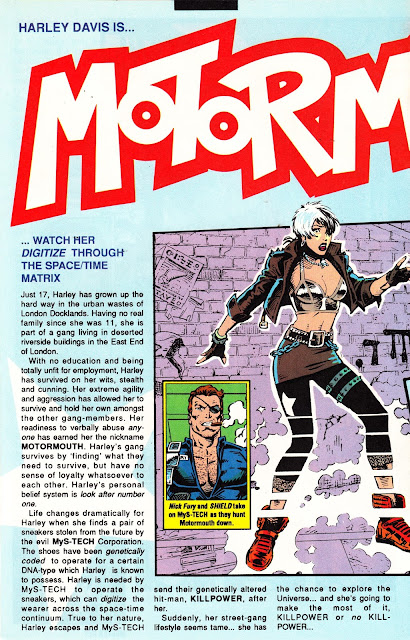 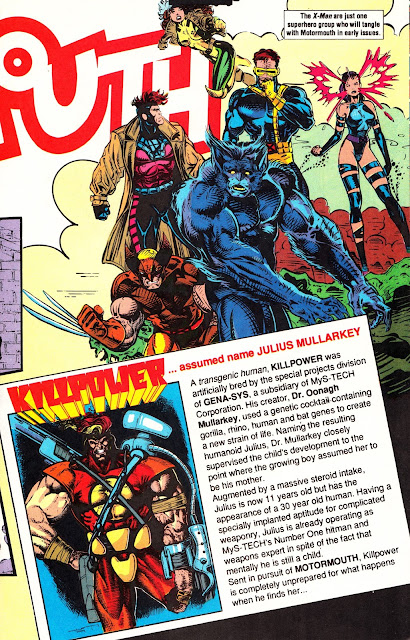