The official organ of the Mighty One is about to celebrate its 2000th issue (who would have imagined?) but I've posted this today to mark STARLOGGED's 2000th post. Yes. Really.

I noticed a couple of months ago that I was approaching the unexpected landmark and I thought this was as good a cover as any to hold back for the big one.

I never thought STARLOGGED would chug on past the first dozen or so posts so this whopping figure is a revelation to me as well. It also means that I have posted well over 2000 different items on here, which is a sobering thought as 95% of things come from my own collection. No wonder I have no space, no money and a frustrated flatmate.

Last week I took one of Starlogged's periodic rest weeks but I used the time constructively (so say I) to dive deep into some previously uncharted boxes to scan some more goodies. I also travelled a little further than usual (not far) and used the opportunity to tawl some outlets I don't usually get a chance to visit and picked up a few bargains (RED DRAWF smegazines for 25p each for example) that will also pop up here in the months ahead.

If you are a relative newcomer, don't be afraid to dive into the Starlogged back catalogue that dates back to 2012 (those early posts were written at Cafe Nero, a relative stone's throw from the banks of the Thames and the one-time HQ of MARVEL UK) and see what you discover. 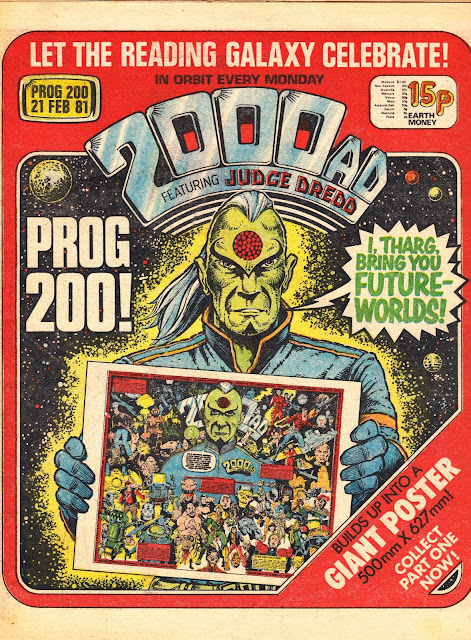 Email ThisBlogThis!Share to TwitterShare to FacebookShare to Pinterest
Labels: 1981, 2000AD