2000AD is celebrating its 35th anniversary this weekend.  Hurrah.  But here's another entry into their Cover Gallery of Shame.  And one that's not likely to feature in many official retrospectives. 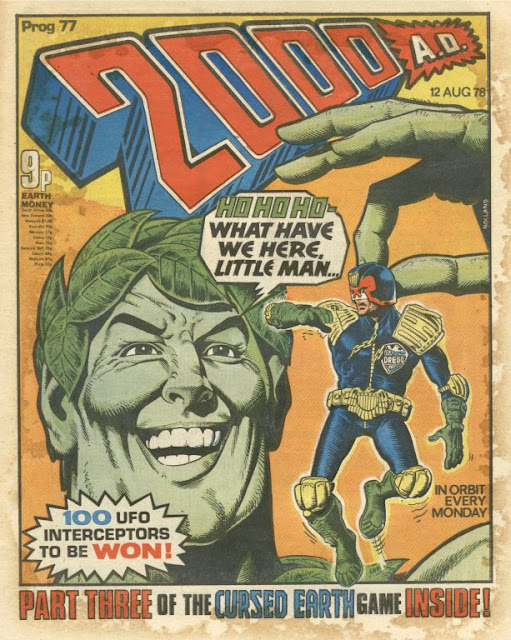 Foolish Tharg, following the rousing success (ahem) of Judge Dredd's Burger Wars (progs 71-72) decided to have a crack at another trademarked icon: the Jolly Green Giant of tinned veg fame.

The Burger Wars managed to avoid incurring the corporate wrath of the fast food purveyors (but made the IPC lawyers so nervous they nixed any reprints anyway) but the jolly one did threaten to sue.  Not only was a "Do Not Reprint" notice slapped onto this two-parter (progs 77-78, August 1978) but Tharg was forced to run an embarrassing half-page strip retraction where Dredd was forced to plug tinned sweat corn.  Ho. Ho. Ho.
Posted by SLOW ROBOT at 08:05

Email ThisBlogThis!Share to TwitterShare to FacebookShare to Pinterest
Labels: 2000AD