With THE MUPPETS about to (belatedly) open in the UK, Slow Robot looks back at Marvel's eighties Muppets and Jim Henson comic books.

Marvel adapted the final movie in the original, unofficial, Muppet trilogy in the fall of 1984.  As with many of Marvel's movie tie-ins of the era, it appeared as a three-issue limited series and as a collected one-shot Super Special magazine.

The comic book editions were the first to appear under the Star Comics banner, marking a soft launch of the young readers imprint.

There was no UK edition. 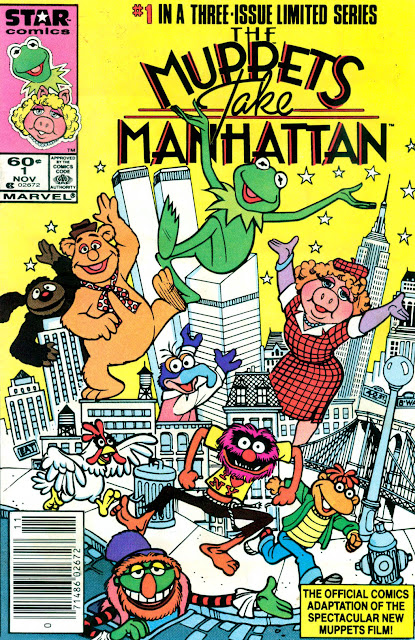 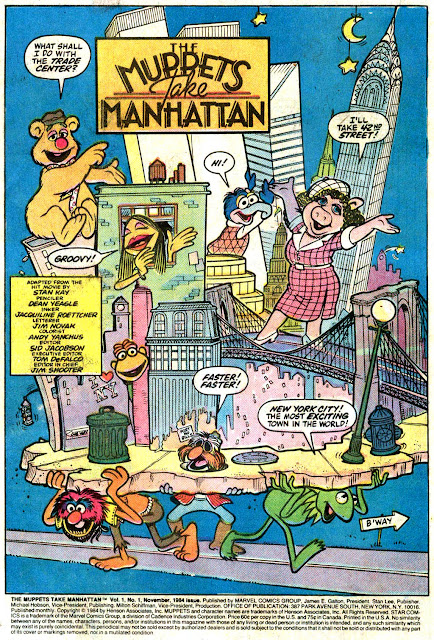 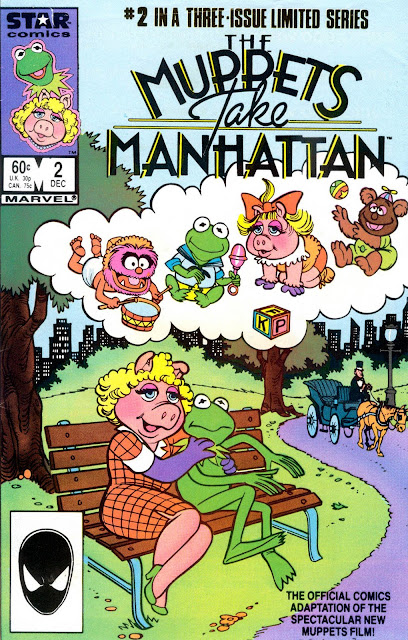 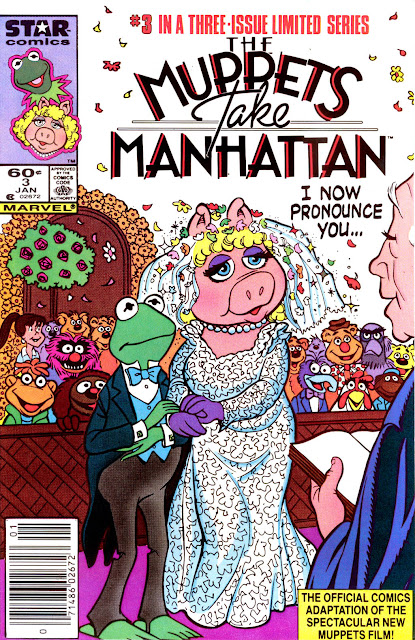 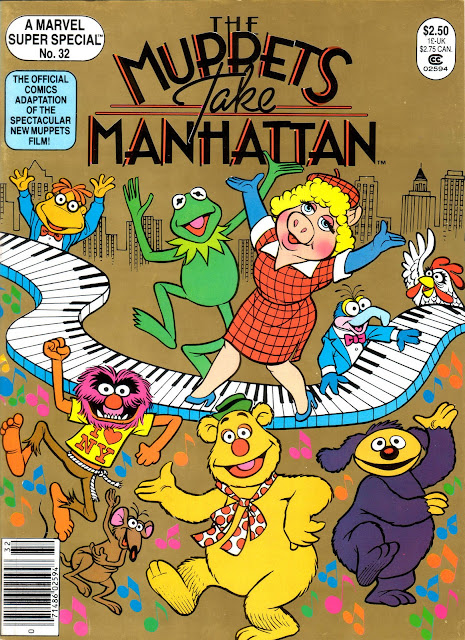 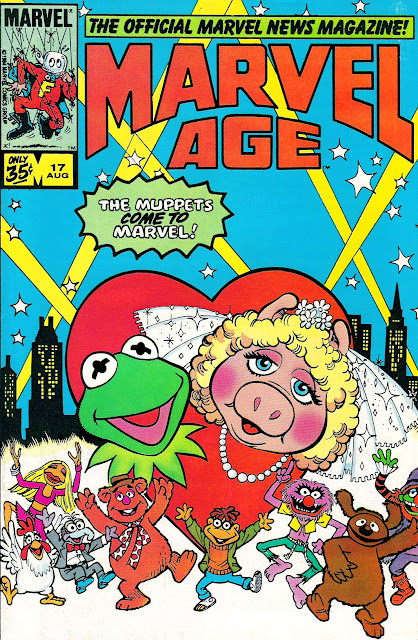 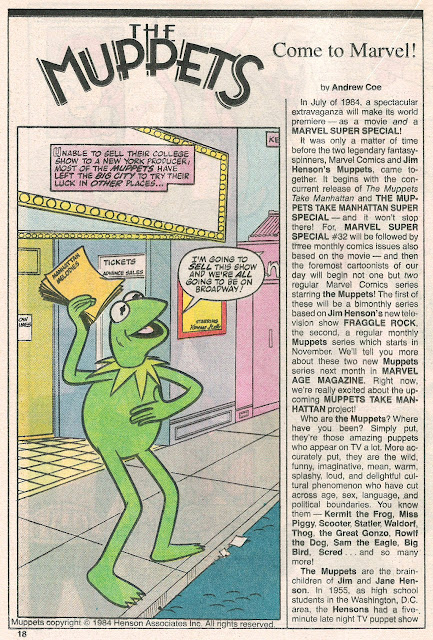 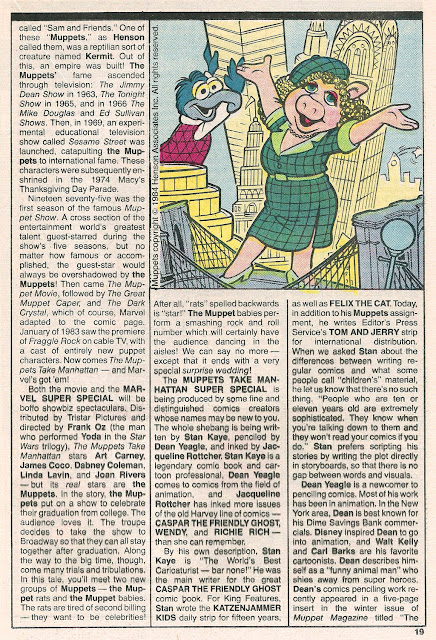 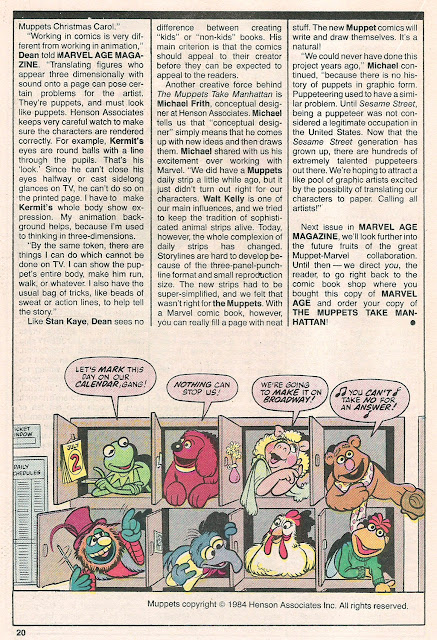 In the UK, the strip was serialised as a back-up feature in STAR WARS: RETURN OF THE JEDI weekly. 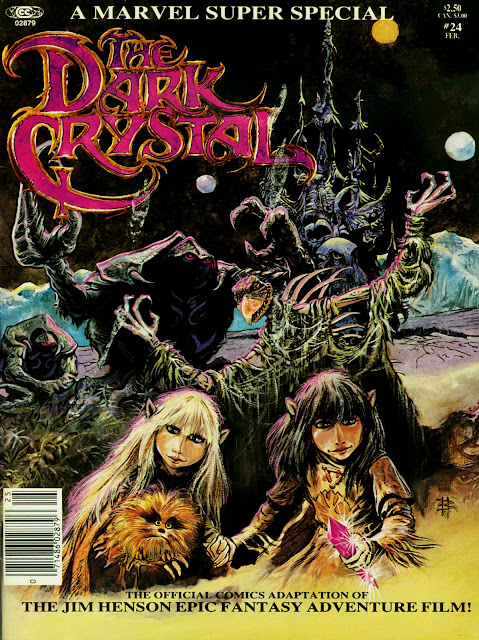 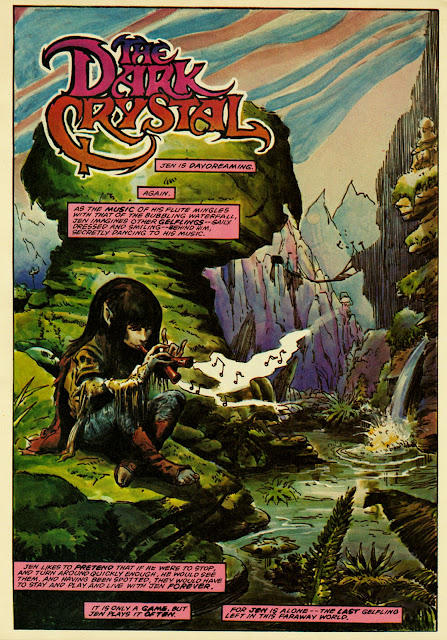 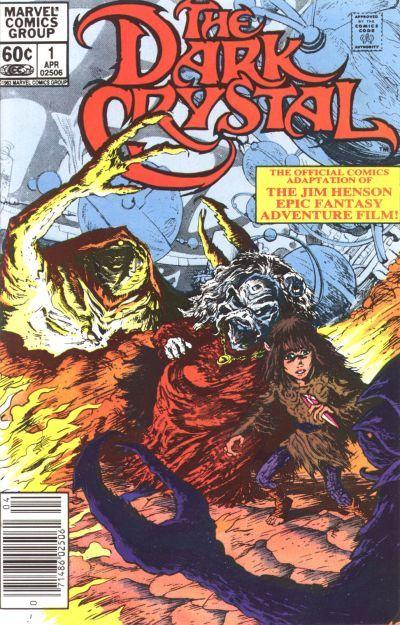 THE DARK CRYSTAL
ISSUE ONE
April 1983 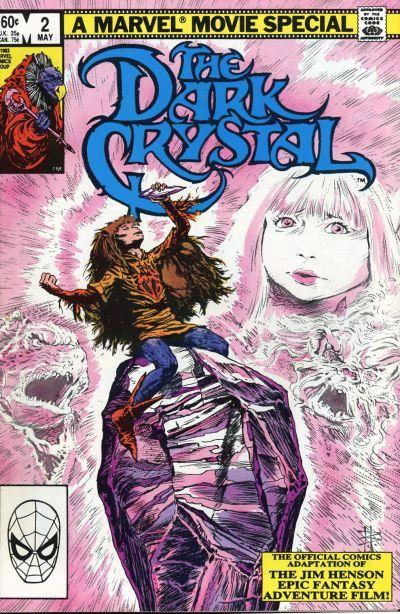 THE DARK CRYSTAL
ISSUE TWO
May 1983

Jim Henson's next non-Muppet fantasy movie, starring David Bowie, was, again, adapted by Marvel and issued as a one-shot Super Special and as a limited series in the regular comic book format.

There was no UK edition. 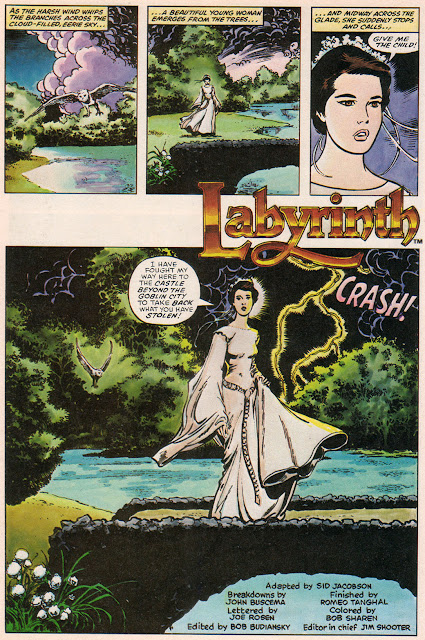 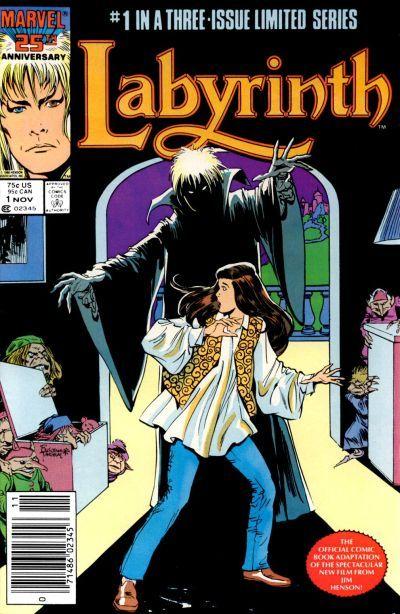 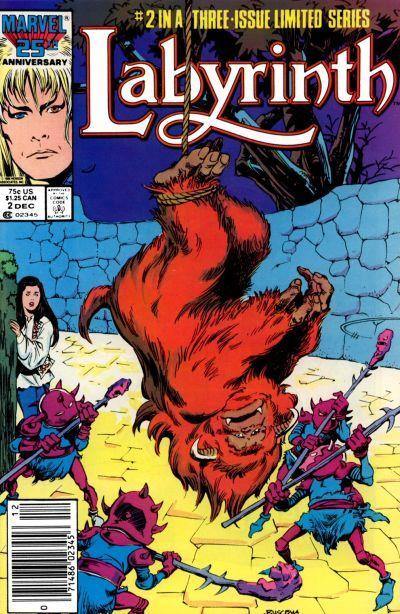 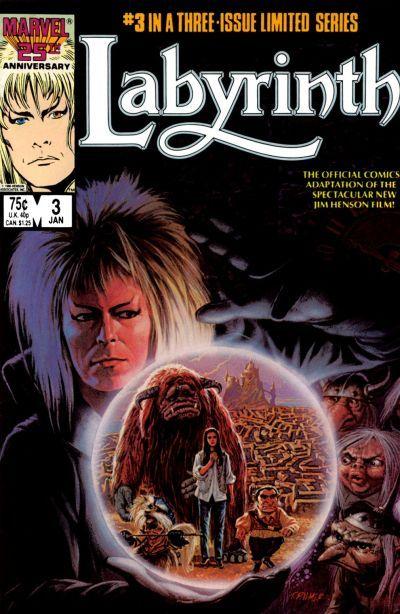 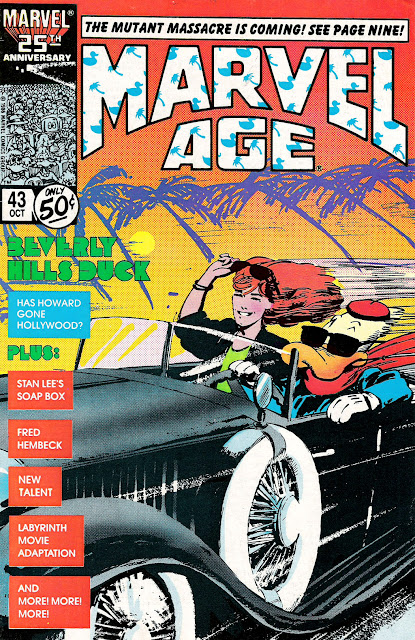 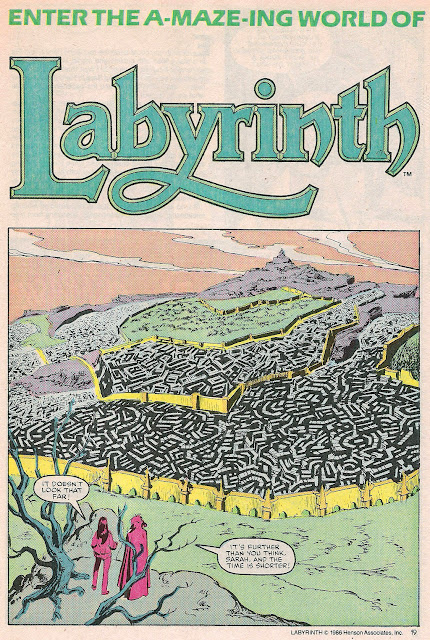 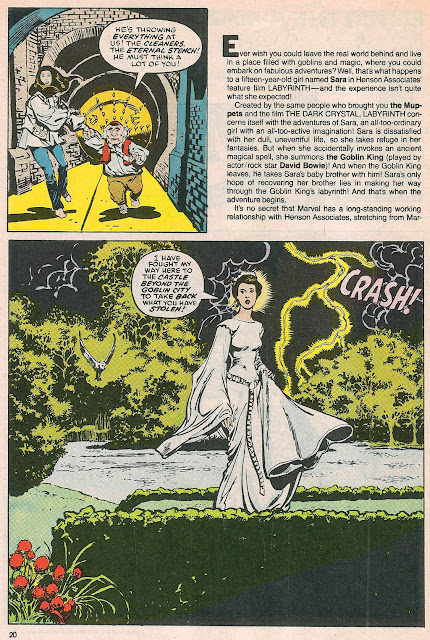 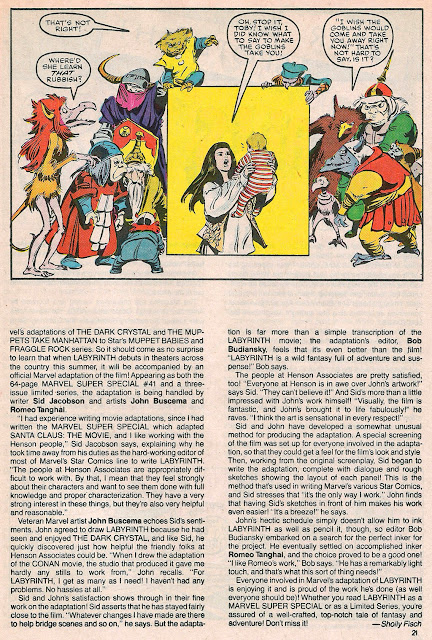 A fan-made trailer for the movie which isn't perfect but is good fun.

Introduced, in puppet form, in THE MUPPETS TAKE MANHATTAN, it didn't take long for the junior Muppets to graduate to their own (Emmy Award Winning) animated series.  As a co-production between Henson and Marvel Productions, it was logical that a comic book version should appear under Marvel's Star Comics banner.

Marvel UK issued a MUPPET BABIES ANNUAL prior to the UK premiere of the TV series and followed-up with a regular weekly, reprinting the US material.  The back-up strip was, initially, FRAGGLE ROCK. 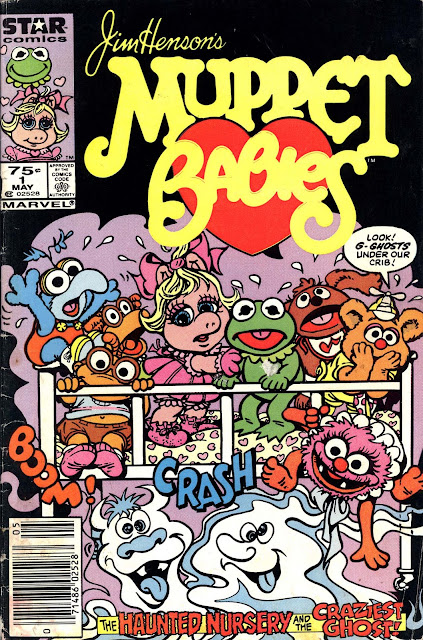 MUPPET BABIES
ISSUE ONE
May 1985

Another entry into the Star Comics line was Marvel's adaptation of the puppet series FRAGGLE ROCK.

The US edition lasted 8 issues, the last cover-dated September 1986.

In 1988, Marvel reissued some of the original Rock run under the main Marvel Comics brand (the Star Comics imprint having been abandoned at the beginning of 1988).  This was, presumably, a low-cost way of capitalising on renewed interest in the property, either through reruns or the animated version.

The series, which aired on ITV in the UK, was interesting as Henson product it as a series of local co-productions, sharing the puppet sequences across all versions but adding country-specific live-action segments (usually involving Sprocket the dog) to the different versions.  Henson's partner in the UK was the (now defunct) ITV broadcaster TVS.

The Marvel strips initially appeared in the UK as a back-up feature in the just-relaunched (for a younger audience) THE SPIDER-MAN COMIC.  The same material later appeared in JIM HENSON'S MUPPET BABIES.  A one-shot spring special reprinted US issue 5. 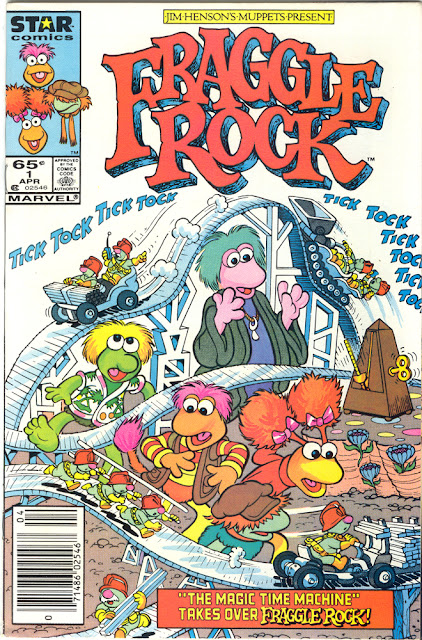 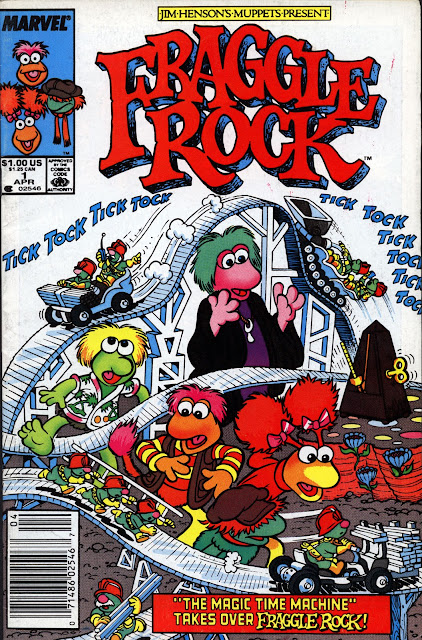 Slow Robot will have a lot more on Star Comics, and the Muppets at Marvel UK, in future editions.