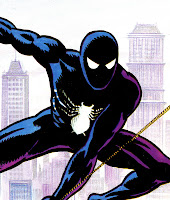 It was the summer of 1985... and that meant one thing... Marvel's Summer Specials.  Any regular readers of Marvel's weeklies and monthlies couldn't avoid knowing about these six one-shots thanks to heavy and incessant plugging courtesy of the ubiquitous house-ad that ran (and ran) for months.

Make no mistake, these were pricy beasts, costing £1.20 each compared with under 30p for Marvel's regular weeklies (still a mix of colour and black & white interiors) and show that Marvel's thinking was heading towards "summer annuals" even through newsagents racked these with the regular comics rather than treating them as premium items.

M-UK had been foolin' around with the album format for a while but these, for the first time, boasted better printing and interior paper stock, accompanied by a price rise from 85p to £1.20.

Each special was 52-pages (including the card-stock covers), square-bound with full-colour interiors.  They were printed by Proost.

A further four Winter Specials were released in the same format later the same year, but these would be the last.  In 1986, Marvel returned to a more traditional format: releasing specials at far lower (and variable depending on the page count of each title) price points.  They more closely resembled normal comics, albeit with full-colour interiors and better paper stock than the weeklies.

The first Summer Specials from M-UK were introduced by Dez Skinn in the summer of 1979.  Prior to that, Marvel considered the occasionally widely distributed imports of US Treasury Editions and Marvel Super Special as being the equivalent. 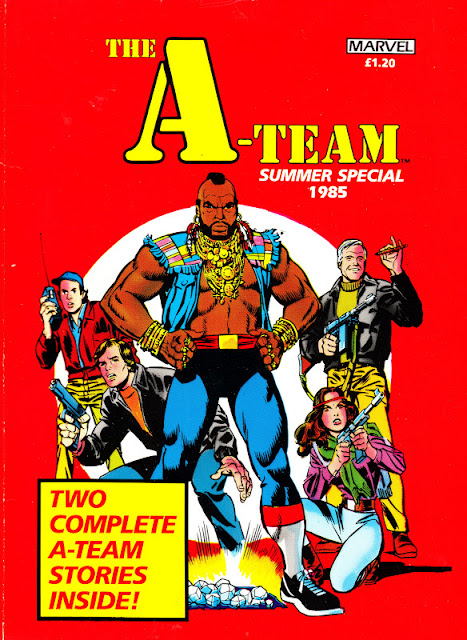 US REPRINTS:
Diamonds are a thief's best friend (from US THE A-TEAM 1)
Who kidnapped Kuramoto? (from US THE A-TEAM 2)
NOTES:
The third issue of the US limited series appeared the following summer.
A TV tie-in strip also appeared in TV COMIC before transferring to LOOK IN. 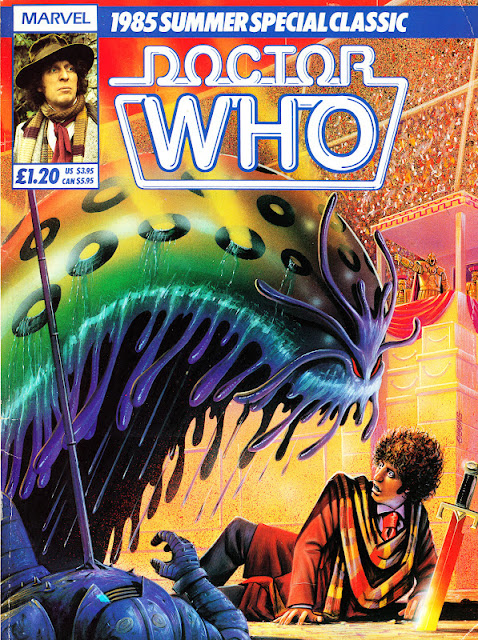 REPRINTS:
The Iron Legion (from US MARVEL PREMIERE 57-58)
K-9's finest hour
NOTES:
Although these strips originally appeared in black & white in DOCTOR WHO WEEKLY, these are the colour versions of the strips published in the US in MARVEL PREMIERE.
The oft-reprinted The Iron Legion had previously been reprinted, albeit in black & white, in the DOCTOR WHO SUMMER SPECIAL 1980.

MASTERS OF THE UNIVERSE SUMMER SPECIAL 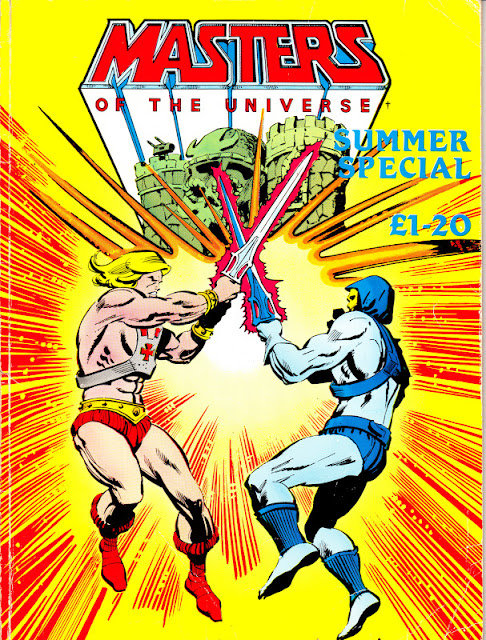 US REPRINTS:
The key to Castle Grayskull (US MASTERS OF THE UNIVERSE 2)
Within these walls (US MASTERS OF THE UNIVERSE 3)
NOTES:
Based on the Mattel action figures.
This appears to be the rarest of the 1985 specials: hard to find at the time and very rarely turning-up today.
These strips are reprinted from DC Comics, the first time (excluding the UK edition of the SUPERMAN/ SPIDER-MAN crossover) M-UK reprinted material from their US 'distinguished competition'.
The MOTU license then transferred to London Editions Magazines (LEM) who published a range of tie-ins.
Marvel US, through its Star Comics imprint, launched a regular MOTU comic but the LEM license prevented UK editions with the exception of Marvel's adaptation of the live-action movie, which M-UK issued as an album-format one-shot. 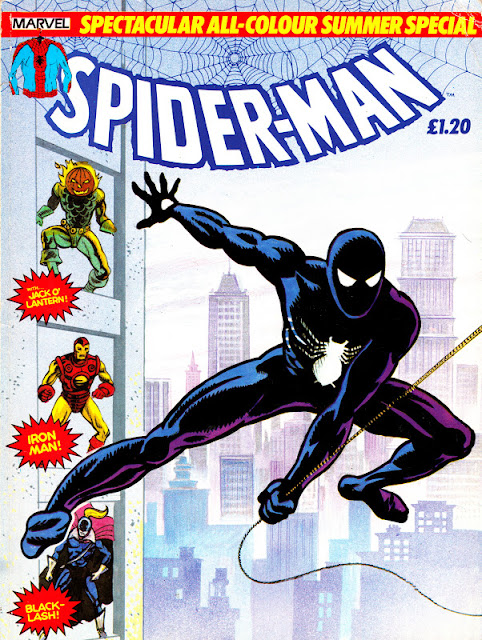 US REPRINTS:
With great power (US THE AMAZING SPIDER-MAN 254)
HOMETOWN BOY (US MARVEL TEAM-UP 145)
NOTES:
These contemporary reprints are an oddity, in their timing rather than their contents.  Plagued by falling sales, the regular Spider-man weekly had morphed into the juvenile THE SPIDER-MAN COMIC (reprints of the semi-educational SPIDEY SUPER STORIES alongside Star Comics fare like FRAGGLE ROCK), turning its back on its traditional contemporary US reprints... and the black costume.  Older readers were clearly meant to shift their loyalties to the just-launched MARVEL SUPERHERO SECRET WARS. 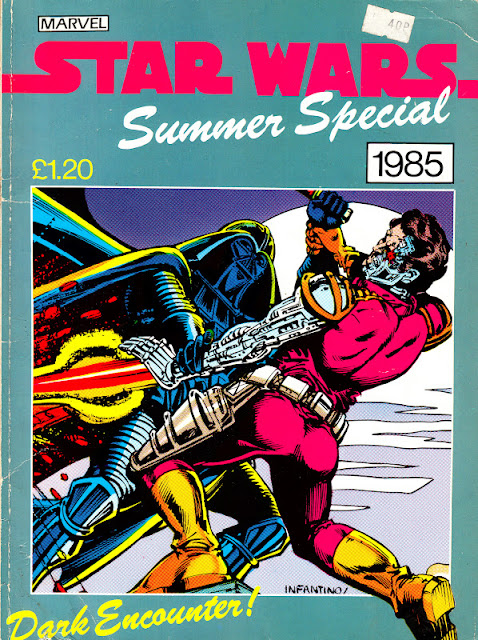 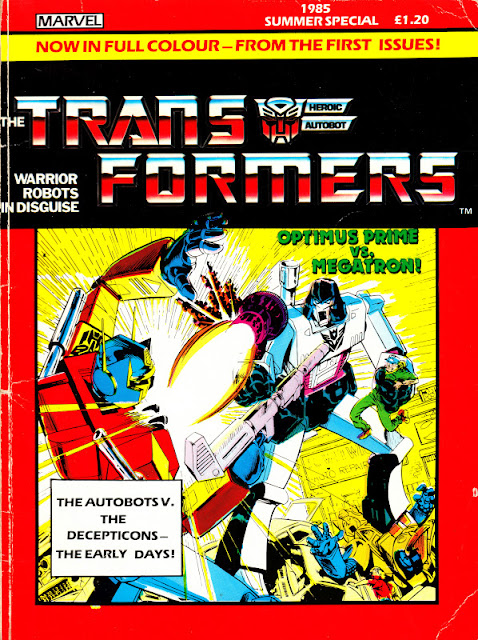 US REPRINTS:
The Transformers (US THE TRANSFORMERS 1)
Power play! (US THE TRANSFORMERS 2)
NOTES:
Although not branded as such, this is the first of the long-running THE TRANSFORMERS COLLECTED COMICS specials.  The CC branding was adopted from the following special.  From issue 3, the album format and US reprints were abandoned in favour of UK reprints in a more traditional UK comic format.
These strips were previously serialised, in colour and black & white, in the regular Transformers fortnightly 1-4. 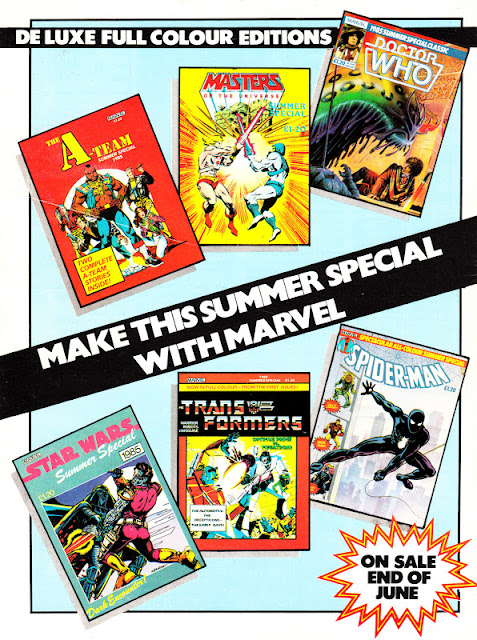 Email ThisBlogThis!Share to TwitterShare to FacebookShare to Pinterest
Labels: 1985, DOCTOR WHO, MARVEL UK, MASTERS OF THE UNIVERSE, SPIDER-MAN, STAR WARS, SUMMER SPECIALS, THE A-TEAM, The Transformers