- The first PLANET OF THE APES film was released in 1968, the last (BATTLE OF THE PLANET OF THE APES) in 1973.
- The second film, BENEATH THE PLANET OF THE APES, had already been adapted by US publisher Gold Key Comics in 1970.  Marvel adapted it for a second time.
- The POTA material published in the weekly was, with one exception, all also seen in the US black and white PLANET OF THE APES magazine, published by Marvel New York's Curtis Magazines imprint (29 issues, 1974-77).
- The UK POTA weekly launched the same week as the horror-themed DRACULA LIVES weekly.
- POTA was the first Marvel comic based on a Hollywood property.
- Future SMASH HITS editor (and pop star) Neil Tennant was Marvel's London editor although most production work was handled by the New York office.
- POTA was the first M-UK title to publish material almost simultaneously with the United States.  This meant, at times, that the UK edition was running material BEFORE the US edition, effectively making the US magazine the reprint.
- This unique situation, and the UK strip's more flexible page count, occasionally meant that panels published in the UK weekly were omitted (to condense pages) in the US magazine.
- Marvel UK's other weeklies were still reprinting sixties inventory, giving them the luxury of not having to worry about the supply running out anytime soon.  Not so for POTA and, in issues 23 - 30, Marvel had to devise a brief filler to bridge the gap before regular service was resumed.  The cost-conscious solution was APESLAYER, butchered reprints of US Killraven strips, replacing the existing aliens with apes!
- The weekly ran a mix of covers created for the US magazine and newly created covers by American artists.
- US writer Doug Moench adapted all five Apes movies... but never even saw the later ones.  In the days before VHS, and working years after they were released in movie houses, he had no practical way of viewing them.  He worked from scripts instead.
- Marvel encountered an unexpected problem with their adaptation of the first movie.  Their license didn't include likeness rights to actor Charlton Heston so Marvel's Taylor was deliberately drawn to look very different.  Except FOX's licensing people thought their first efforts still looked too much like the actor... and demanded changes.
- The weekly ran for 123 issues.  It absorbed DRACULA LIVES from issue 88, adding US Tomb of Dracula reprints.  It merged with THE MIGHTY WORLD OF MARVEL from 231, running Apes material until 246 (June 1977).
- Back-up strips included the jungle-themed Ka-zar, adaptations of Killdozer (also made into a TV movie) and The Day of the Triffids (years before the BBC adaptation), Tomb of Dracula and Man-Thing (carried-over from the cancelled DRACULA LIVES) and, latterly, Conan the Barbarian.
- The UK saw three hardback POTA annuals, from Brown & Watson, published from 1975-77.  These were based on the TV series and published independently of Marvel.
- Both the US and UK editions ran articles on the making of the POTA TV series but Marvel never secured the comic strip rights.  The only strips to feature the characters and situations appeared in the UK annuals and an unlicensed Argentine comic.
- The first part of Marvel's ESCAPE FROM THE PLANET OF THE APES adaptation features an apes-in-space sequence entirely omitted from the film.  This sequence was scripted (and possibly shot) but the film begins with the craft already splash-landed on 20th century Earth. 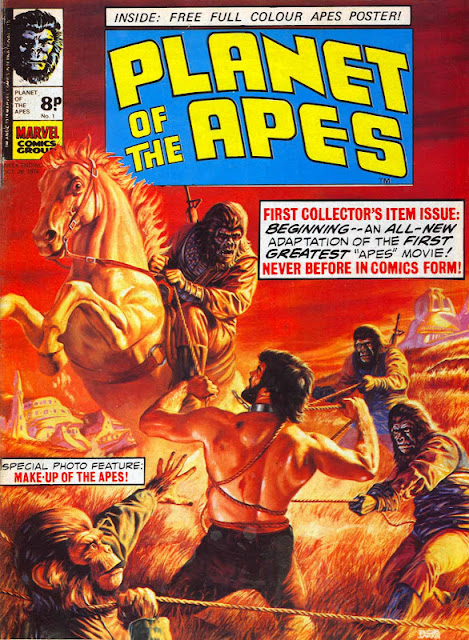 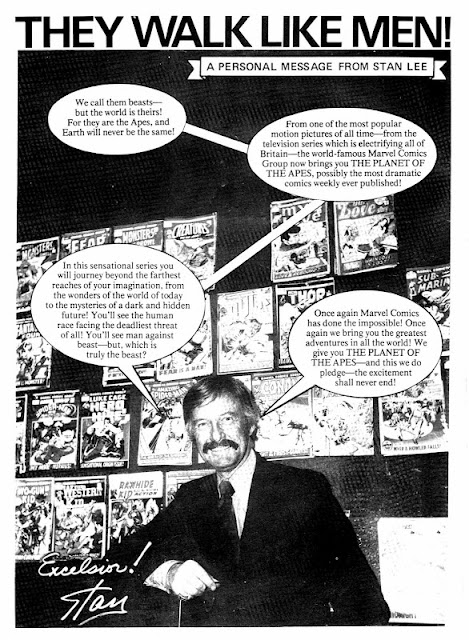 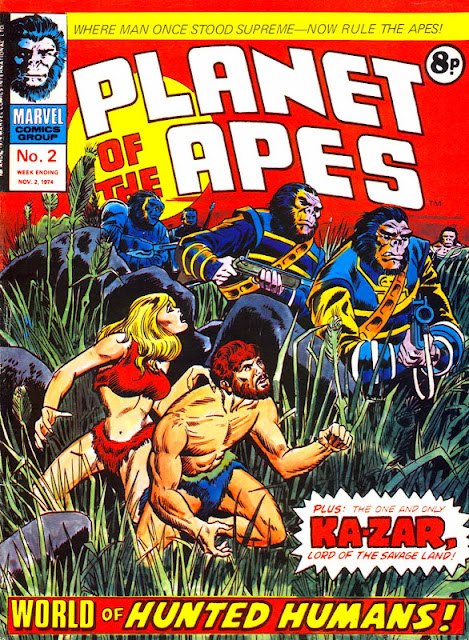 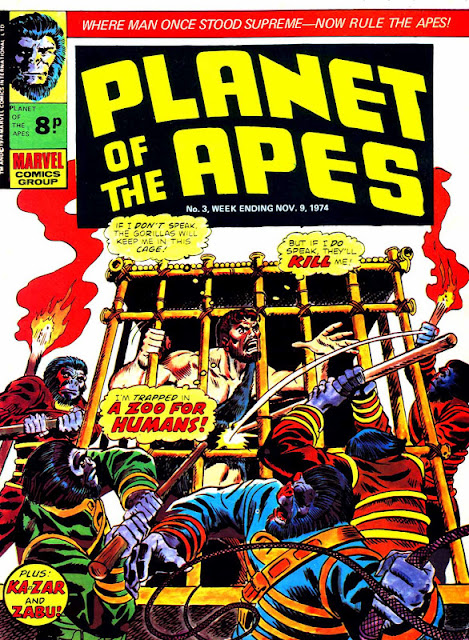 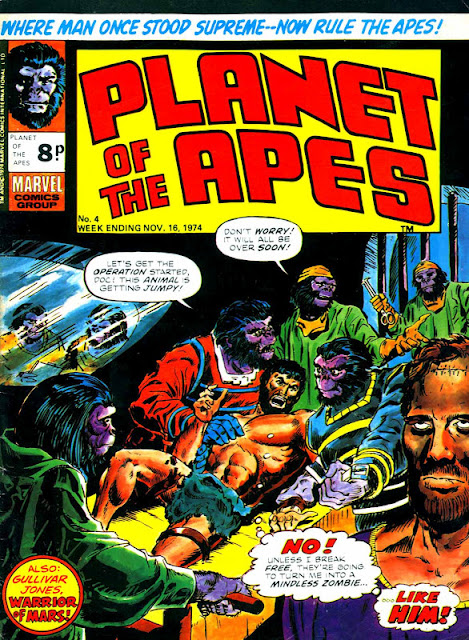 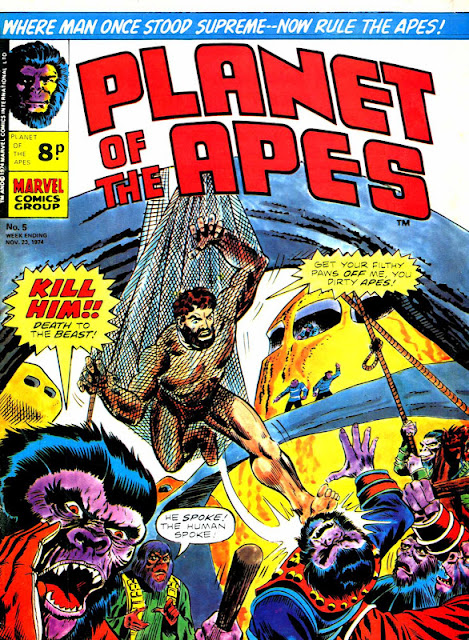 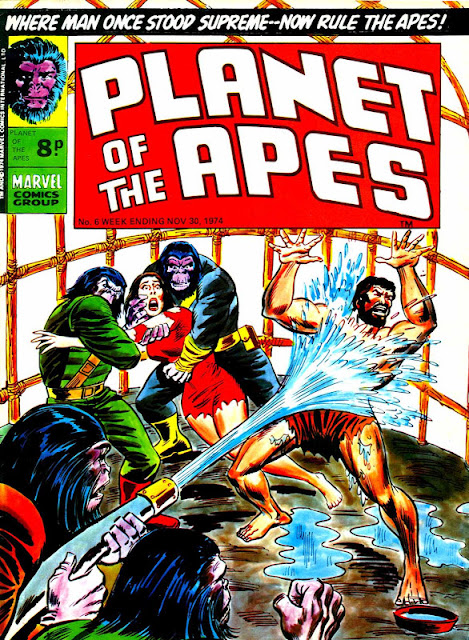 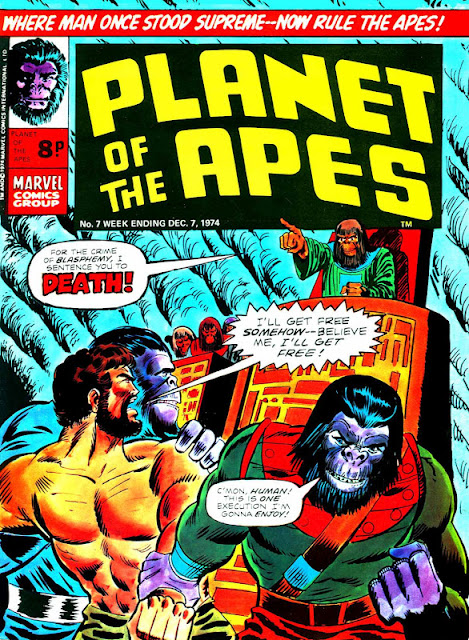 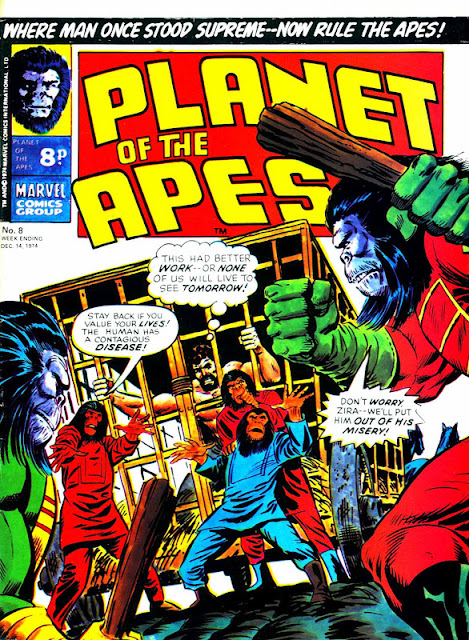 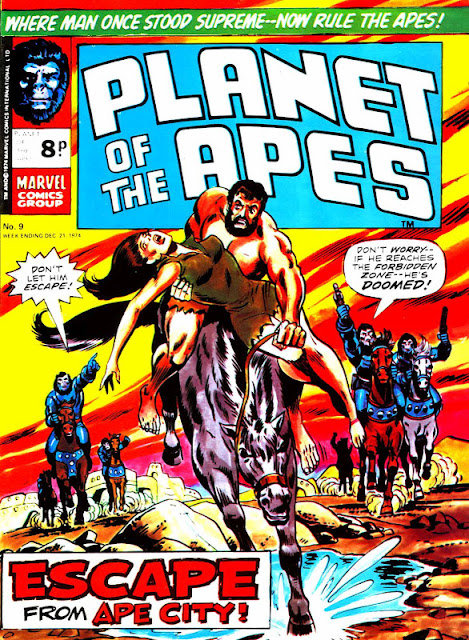 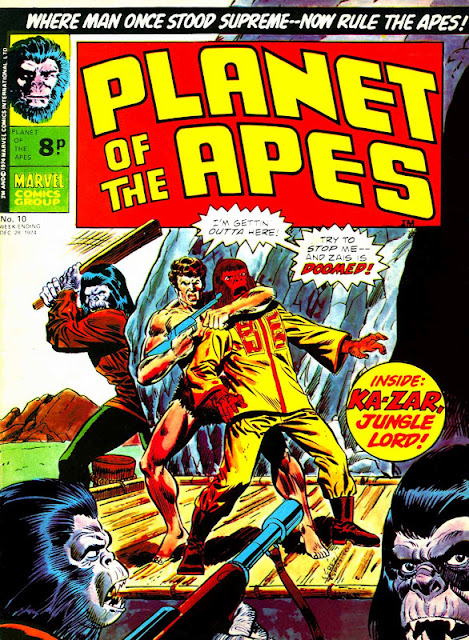 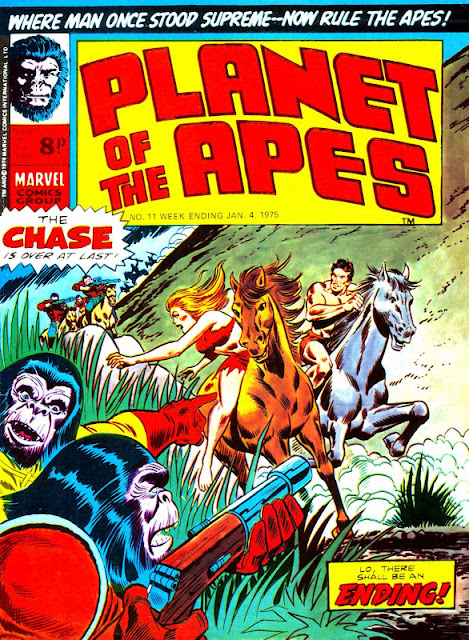 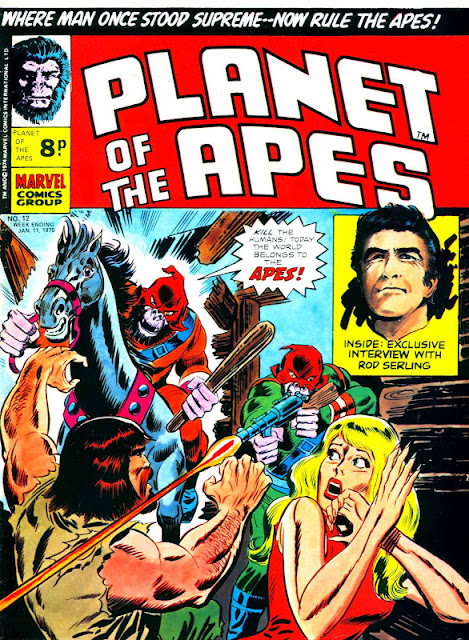 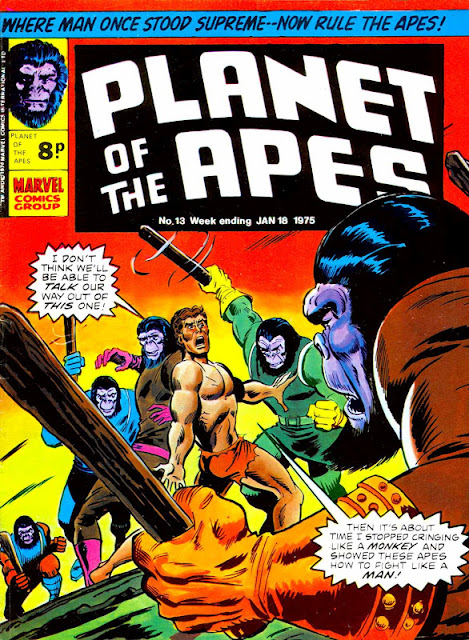 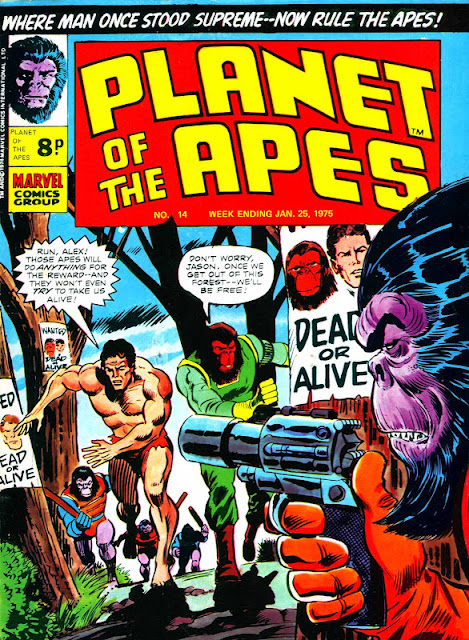 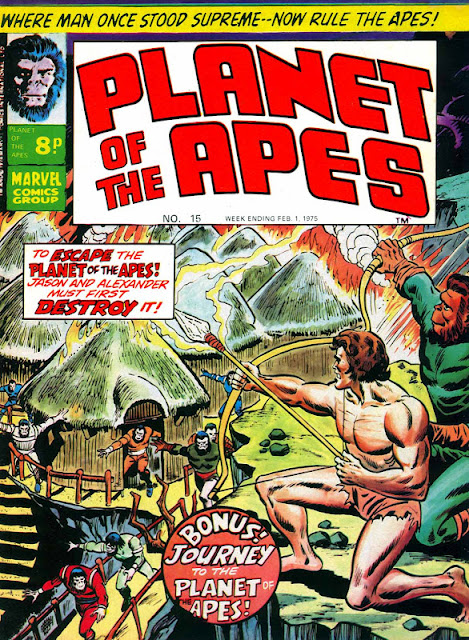 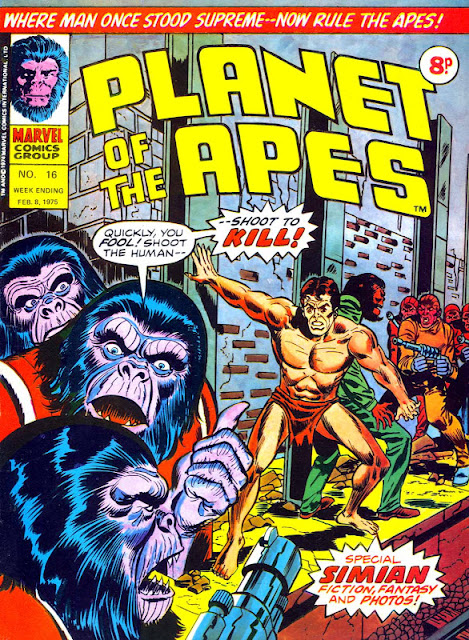 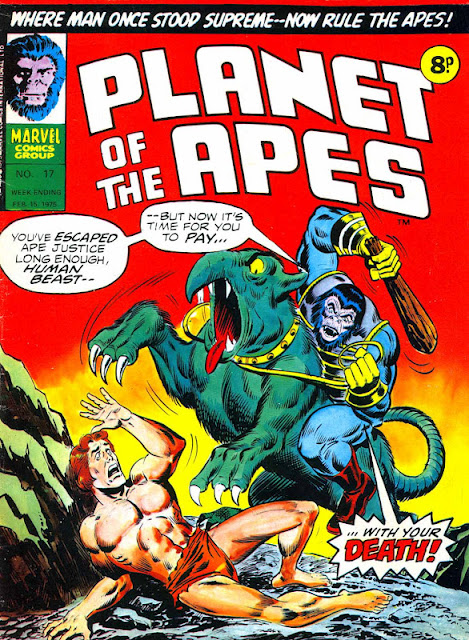 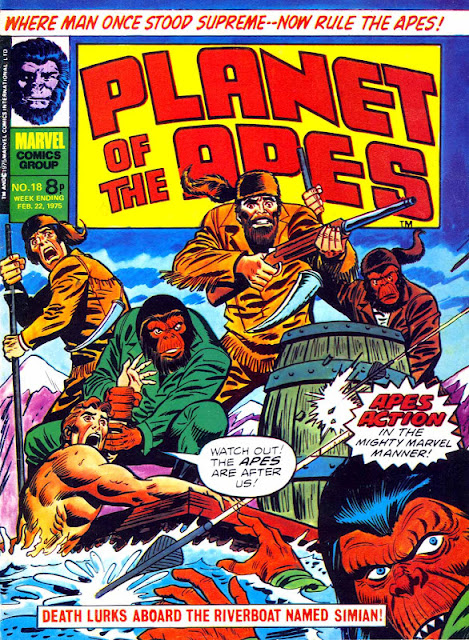 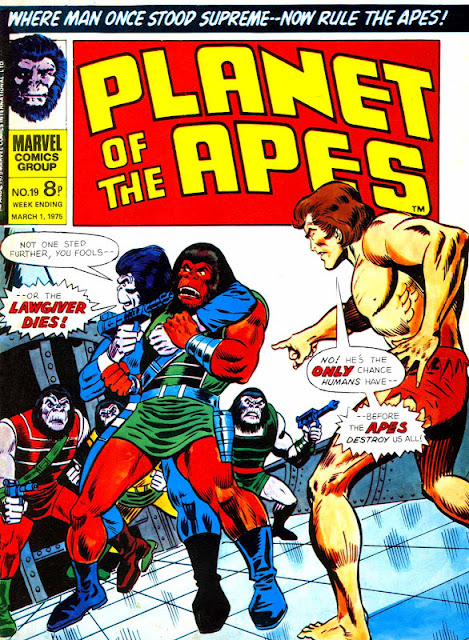 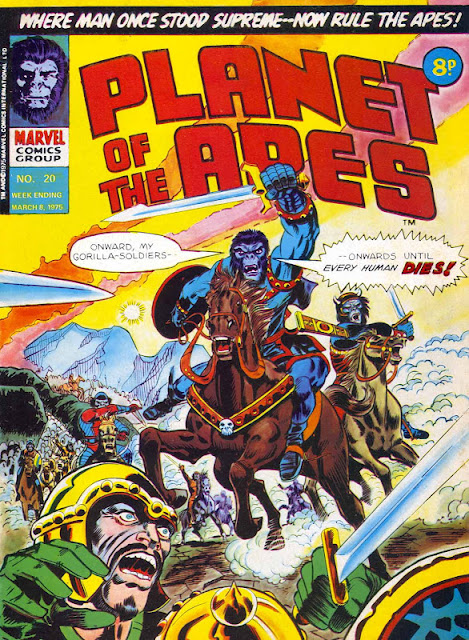 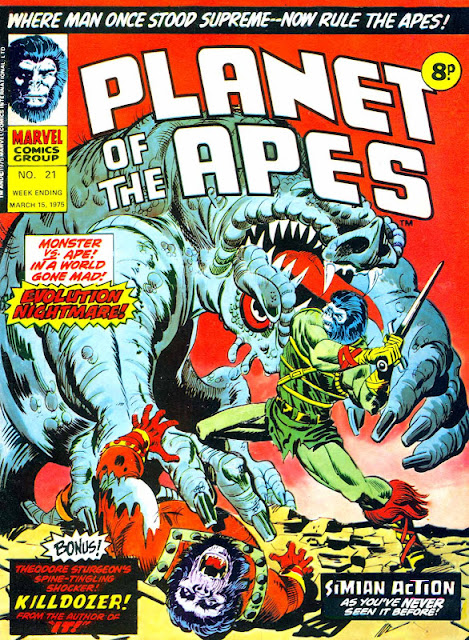 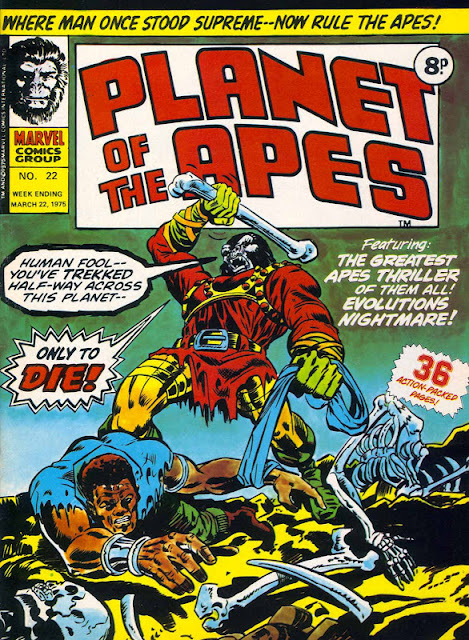 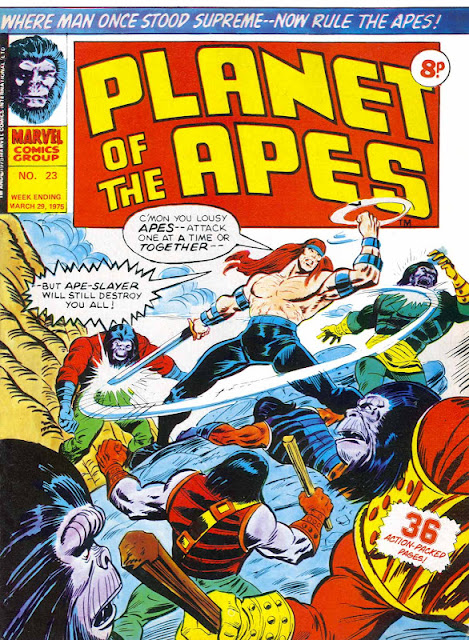 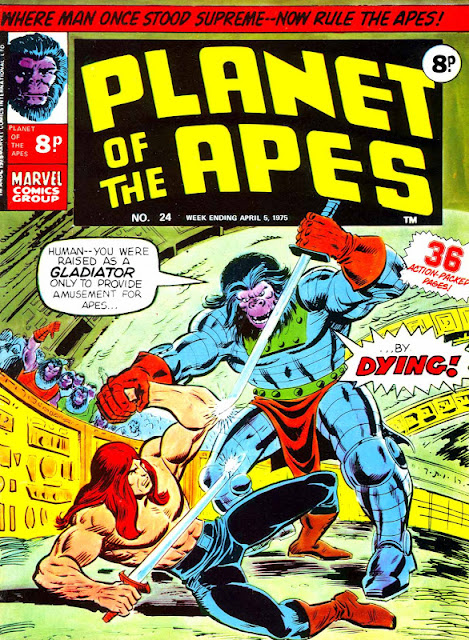 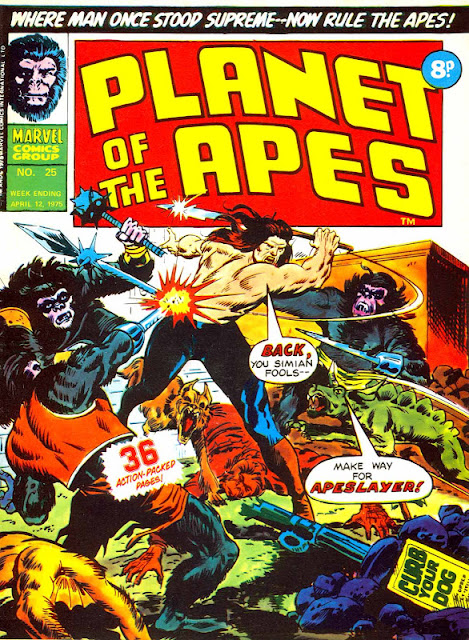 Email ThisBlogThis!Share to TwitterShare to FacebookShare to Pinterest
Labels: 1974, MARVEL UK, PLANET OF THE APES