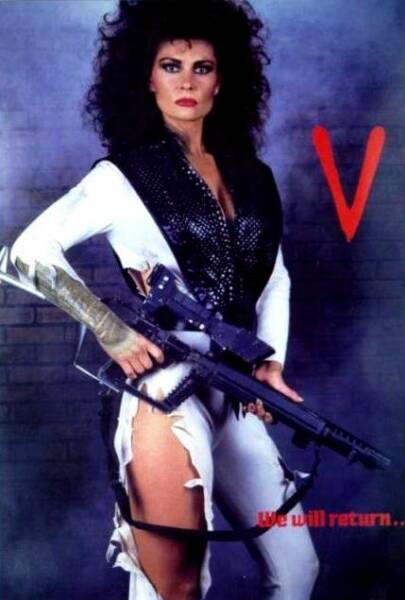 'V' was writer/ producer/ director Ken Johnson's account of how individuals would react to the arrival of (apparently) peaceful aliens with a covert mission to harvest the population.

The original four-hour (three-hours plus commercials) mini-series is a TV landmark, combining smart (for the period) writing, impressive (except for the odd against-the-deadline shot) and well-paced scares and revelations which maintain the pace.  The DVD is made a must-have thanks to Johnson's observed, detailed and honest commentary.

Here is a nicely assembled fan-made 'trailer' for the original mini-series (which also incorporates footage from the sequel):

Johnson bailed-out of the 1984 sequel V: THE FINAL BATTLE in a dispute over a shrinking budget.  The six-hour (with those pesky breaks) mini-series was based on his story outline but severely diluted by less writing talents and the studio's accountants.

THE FINAL BATTLE turned out to be anything but with a hastily-commissioned (and long-threatened) weekly series cobbled together for the same year.  A bloated cast (including many familiar faces retained from the first two chapters), improbable premise (the aliens, despite overwhelming firepower, accept Los Angeles is an "Open City" where only limited, budget-friendly, skirmishes are permissible) and an impossibly inept budget were wholly inappropriate for the ambition of the premise.  With falling ratings and a shrinking budget, V: THE SERIES swiftly dive-bombed into cash-strepped camp with a distinctive whiff of decay and impending doom.  Sure enough, it was cancelled after 19 episodes (one of which, Breakout, was deemed too violent and omitted from the original run but restored for summer reruns) and loose talk of a retooled second season, TVM's or another mini-series all amounted to nothing.

Just how camp did things get?

DC Comics, flush with the success of their licensed STAR TREK monthly, loyally licensed 'V' from their telly-producing corporate cousin and attempted to weave new stories between the weekly series radially changing format.

Cary Bates was the lead writer with art from industry legend (and no stranger to licensed titles, having been a prominent contributor to Marvel's STAR WARS saga) Carmine Infantino.

Readers criticised the inconsistent likenesses of TV characters (a contractual requirement to avoid additional payments and approvals), hitherto unseen Visitor technology (flying platforms, jet packs and the ability to casually regenerate missing limbs) and Motherships which alternated between high and low orbit depending on the whim of the artist. 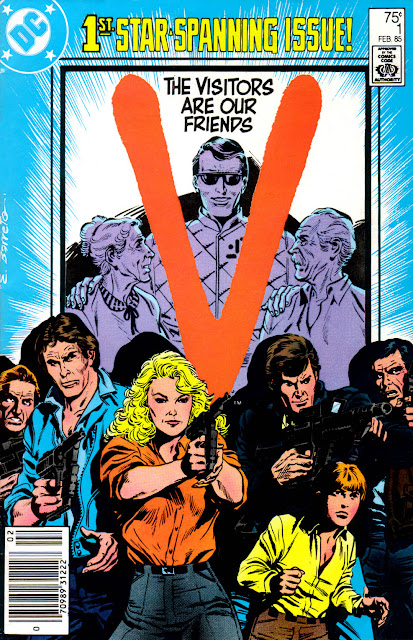 ISSUE 1
Cover date: February 1985
The early issues were clearly produced whilst the exact format of the weekly series was still being refined.  Several regular characters are conspicuous in their absence and Chris Farber is far more prominently featured here than in the show (the character only appears a couple of times).

The title sequence for episodes 1-11 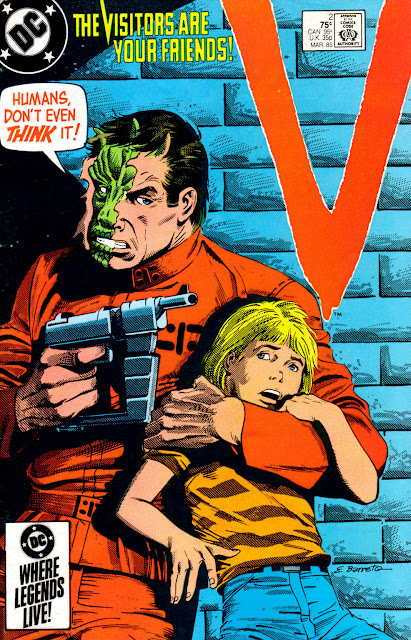 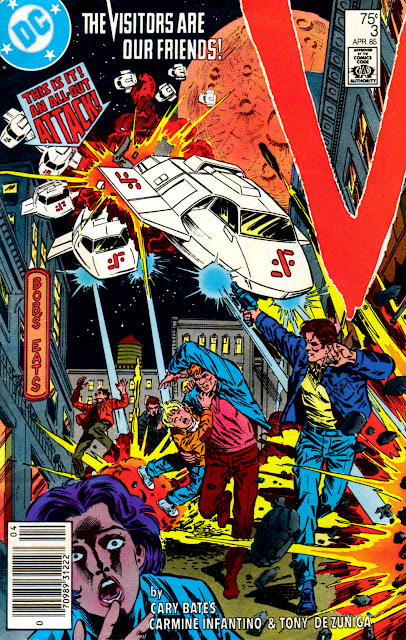 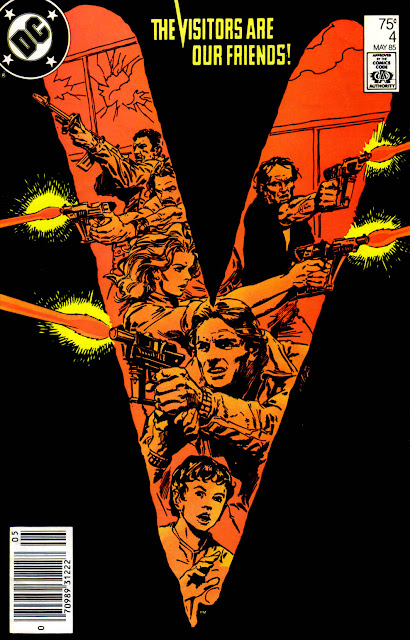 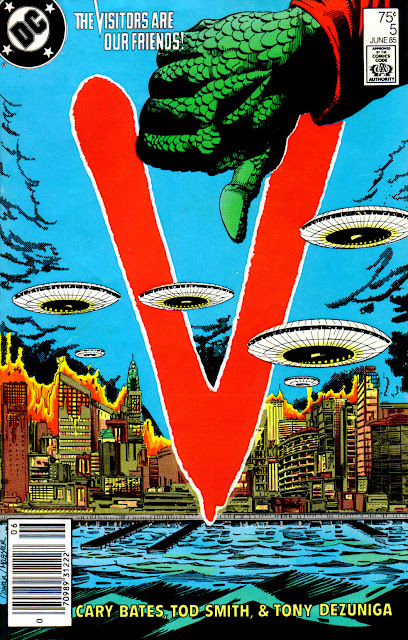 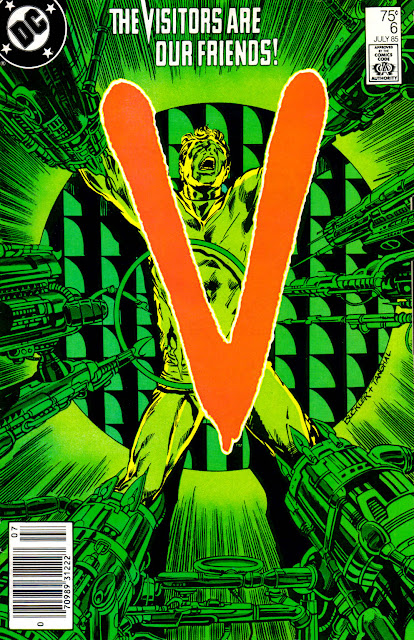 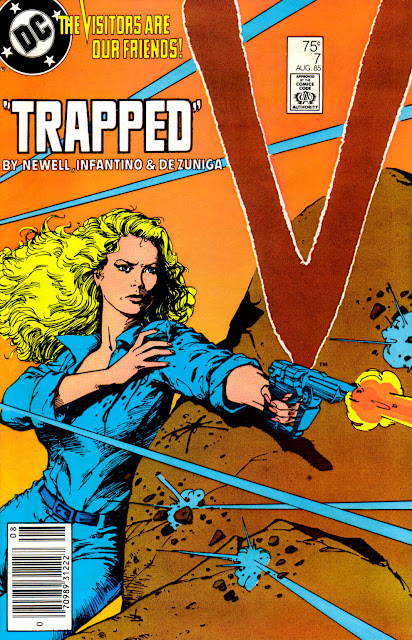 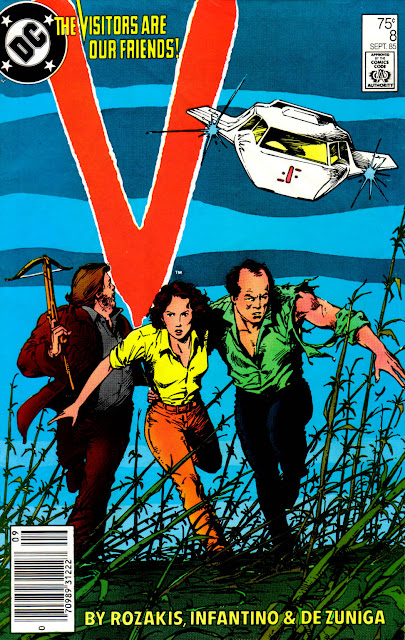 ISSUE 8
September 1985
Ham Tyler, Robin Maxwell and Chris Farber left the LA Resistance (and, in the real world, the show), as part of the mid-season revamp, to aid the Chicago Resistance.  Although never seen on-screen again, their adventures are featured here and in issue 15.
This, and the following, issue is set in New York City and is a semi-sequel to the novel EAST COAST CRISIS.
Charles is dead in this issue and Phillip, Martin's brother (also played by Frank Ashmore) appears for the first time. 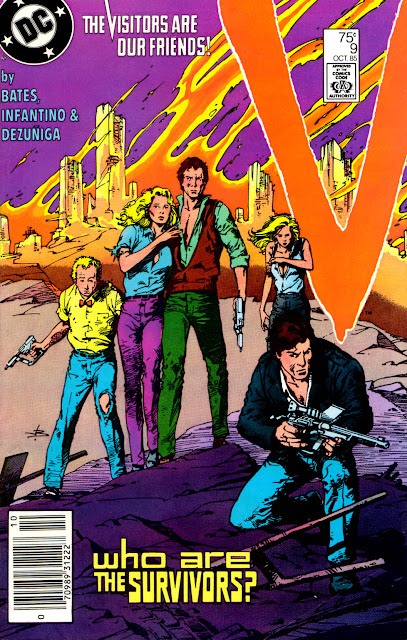 ISSUE 9
October 1985
This is the first issue to reflect the revised format (and reduced cast) introduced to the TV series mid-season. 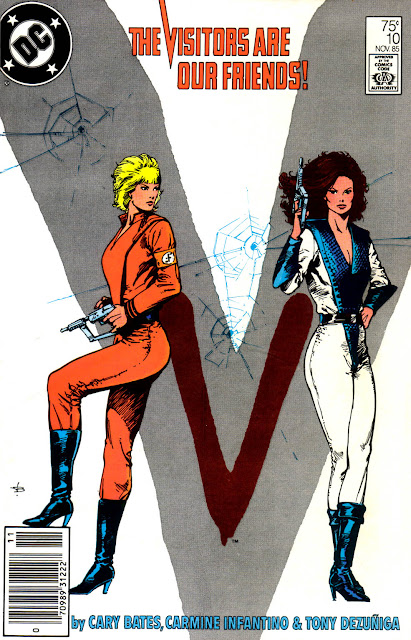 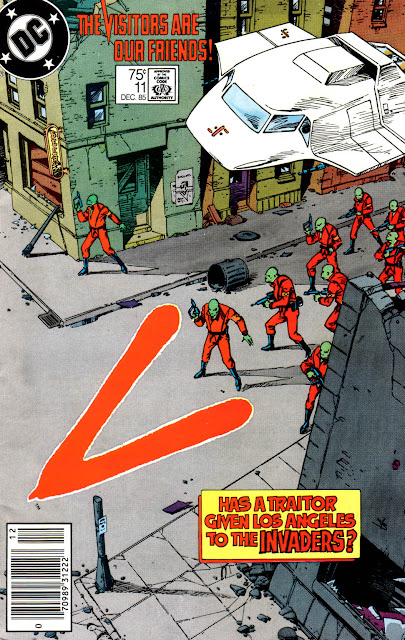 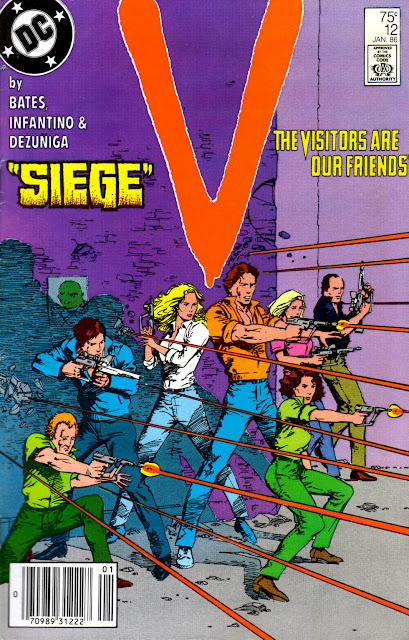 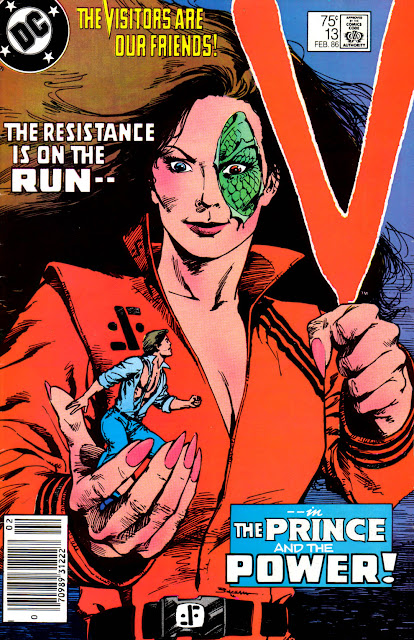 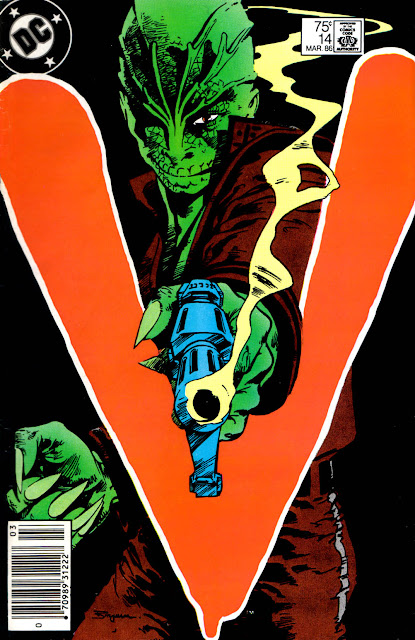 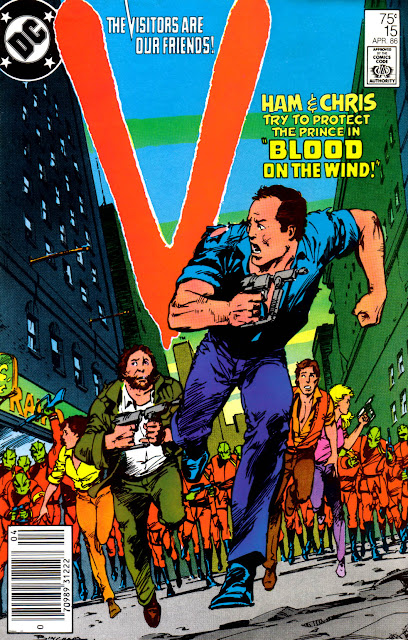 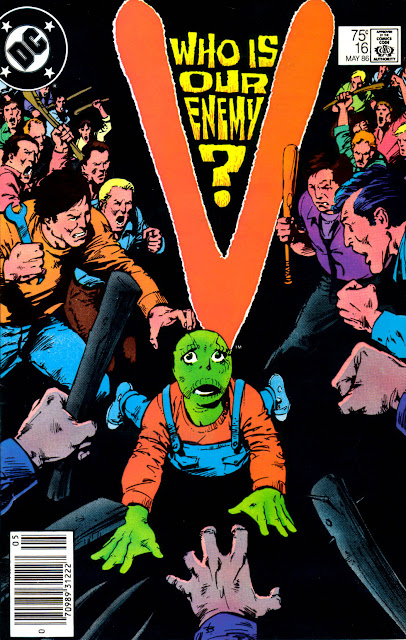 ISSUE 16
May 1986
The conclusion of this issue dove-tails into the opening moments of the final TV episode and the Leader's unexpected announcement of an end to hostilities. 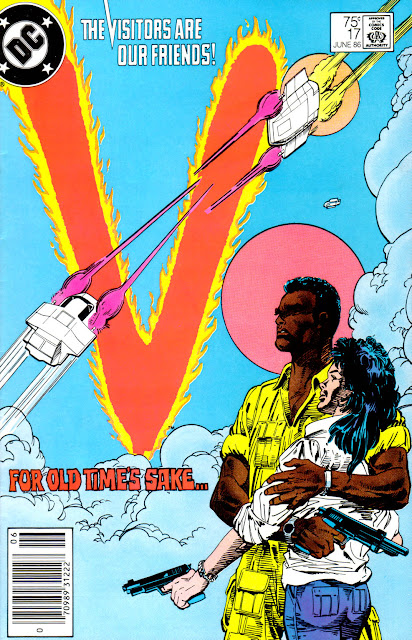 ISSUE 17
June 1986
This, and the following issue, was originally intended to form the contents of the first V ANNUAL.  The TV show's cancellation, and falling sales of the comic book, ended those plans and the material appears here instead. 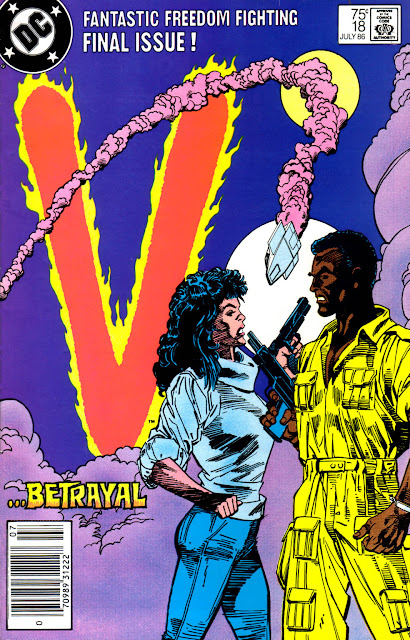 There was no UK edition (although it was translated into Dutch and other languages) but the US issues were distributed to UK newsagents as part of a package of DC imports.