The war is over.  The heroes (most of them) have come home.  The toy deal with Mattel isn't delivering the next MASTERS OF THE UNIVERSE.  But the Secret Wars is a best-seller and Marvel is about to be sold (to New World Pictures).  A money-spinning sequel is required.

Writer (and Marvel Editor-in-Chief) Jim Shooter at least had the good grace to wait a few months before bringing the Beyonder to Earth and disrupting the whole Marvel Universe again.  Marvel UK dispensed with all the stuff in between (not even bothering to show the participants arriving home, a shortcoming that has carried through to Marvel's assorted trade paperback collections over the years) and, one week after peace was declared, the war began again.

The SWII reprints led to some significant changes to the weekly.  Most obviously, the title changed (again).  The editors also opted to run one US issue per week, tricky in the new 24-page format.  Each US edition contained around 22 pages of strip, leaving little room to spare when also trying to squeeze in a cover, editorial pages and the all-important paid advertising.  Certainly, the back-up strips had to go.

The format of the second limited series was a little different.  The core title would run only nine issues (rather than twelve) but would actively crossover into other Marvel Universe titles (and the licensed ROM SPACE KNIGHT and THE MICRONAUTS) as the Beyonder randomly roamed the Earth on his fact-finding mission.

These crossovers presented something of a problem for Marvel UK.  Not all of them were terribly critical to the overall story arc (some amounted to little more than a cameo as the Beyonder breezed past in a couple of panels in an otherwise wholly unrelated plot).  To make them make sense, M-UK would often have to print a whole unrelated story arc, just to make one issue make sense.  The down-side of this approach is that SW II in the UK is even more disjointed than the US incarnation, drifting away from the core story for weeks at a time.

But, to Marvel UK's advantage, this did have the effect that Marvel could (within reason) extend the second War for as long as sales remained healthy.  Still selling well?  Run a few weeks of The Fantastic Four before returning to the core story.  Bingo!

The sprawling nature of SWII meant that characters and strips hitherto unseen in the UK suddenly got their fifteen minutes (or seven days) of fame before vanishing back into the relative obscurity of comic shops.

Despite running copious amounts of unrelated material, Marvel London still managed to omit a number of the official crossovers, including both ROM and The Micronauts (making their encounter with The X-Men, reprinted in THE MIGHTY WORLD OF MARVEL Volume 2, their last UK appearance after runs in STAR WARS WEEKLY, STAR HEROES and FUTURE TENSE).  Presumably these were deemed surplus to requirements, too complicated to contextualise or (in the case of the above) no-longer licensed in the UK.

Occasionally, to make things fit (or to simplify things), Redan Place omitted pages, reworked text or even combined panels and pages from completely separate issues to weave their new tale.

From March 1986, Secret Wars II was joined on newsagents shelves by SPIDER-MAN AND ZOIDS, publishing contemporary Spider-man adventures (allowing for some crossovers and cross-promotion) and, from January 1987, providing (short-lived) sanctuary for the just-cancelled SECRET WARS II too.

OCO = Official Crossover as defined by advertising and cover splash. 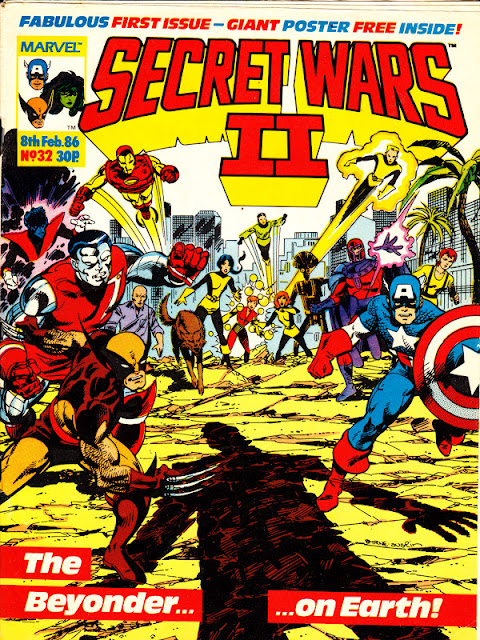 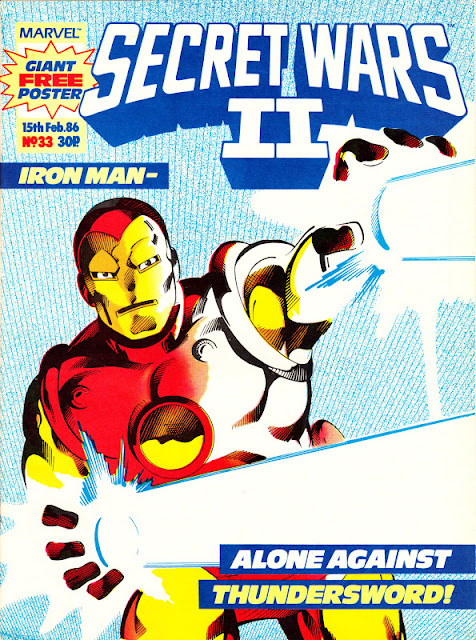 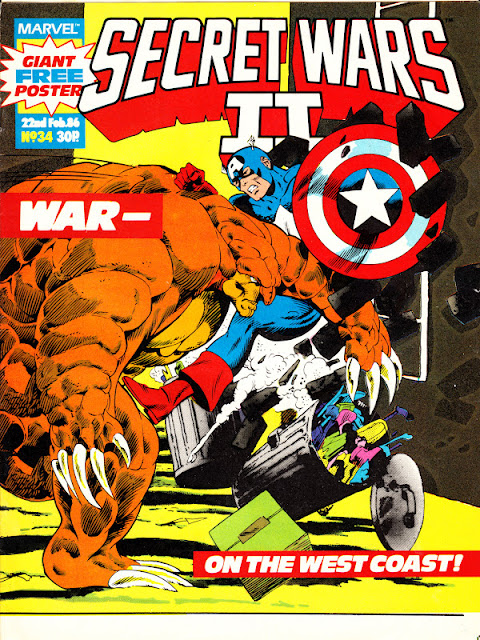 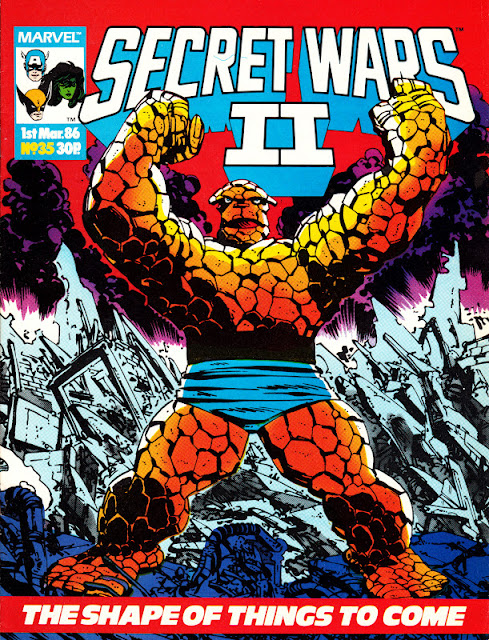 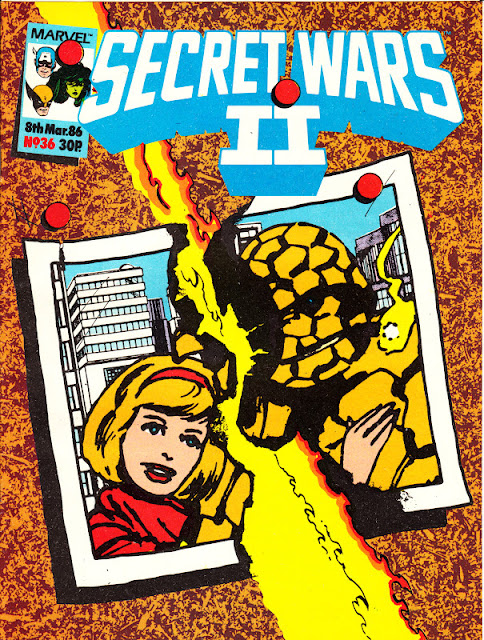 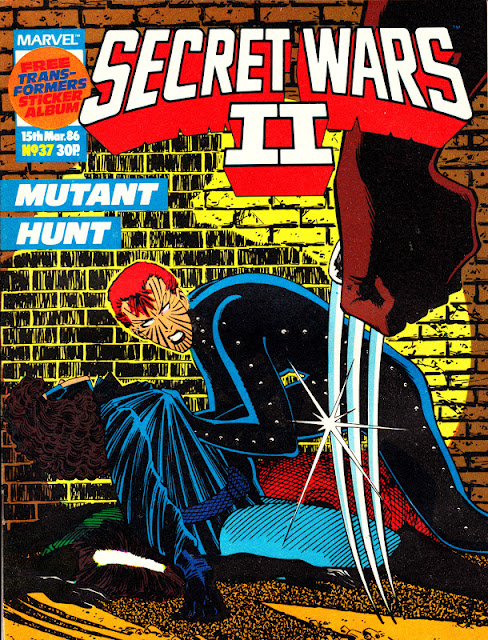 Free polybagged THE TRANSFORMERS sticker album and sticker pack, published by Panini.  Based on the Sunbow/ Marvel Productions animated series. 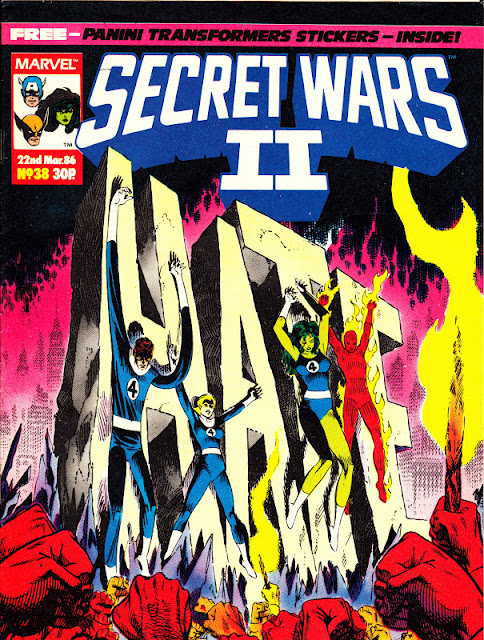 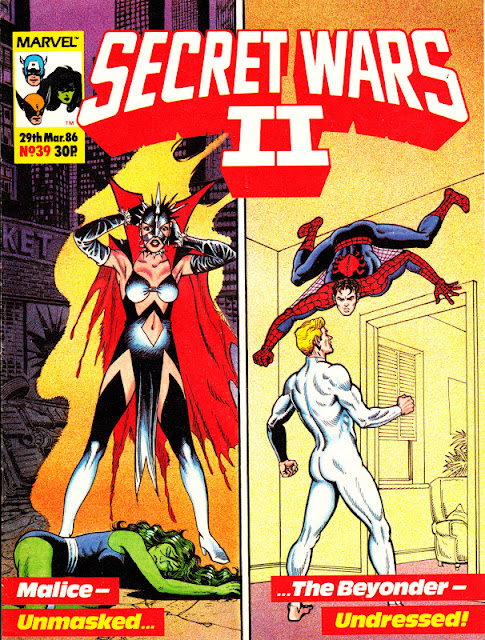 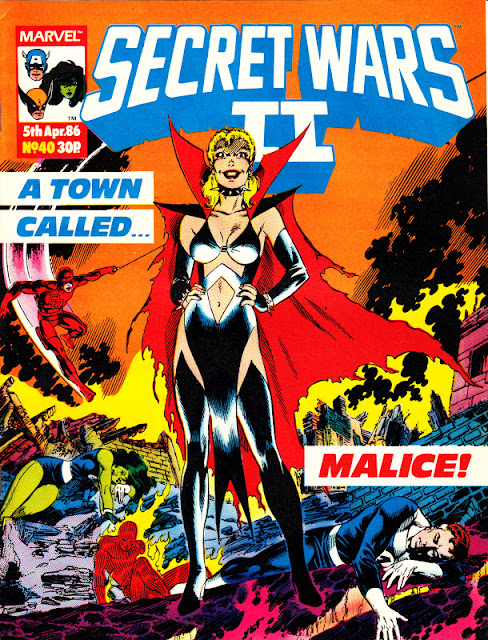 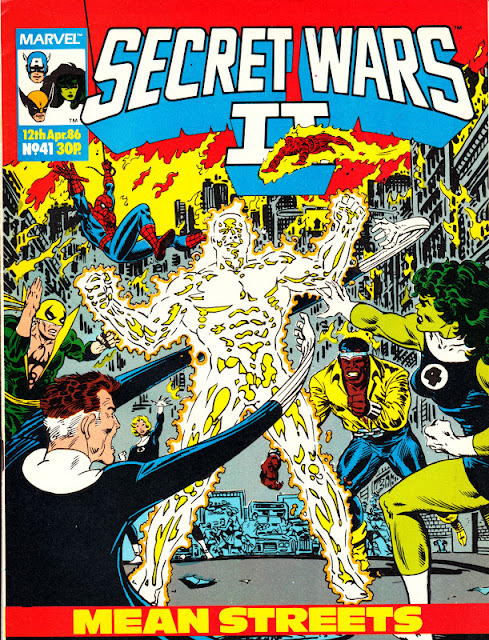 Reprints US SECRET WARS II 2 (August 1985).  Cover art is revised to remove Spider-man's black costume and replace it with his traditional blue-and-red outfit. 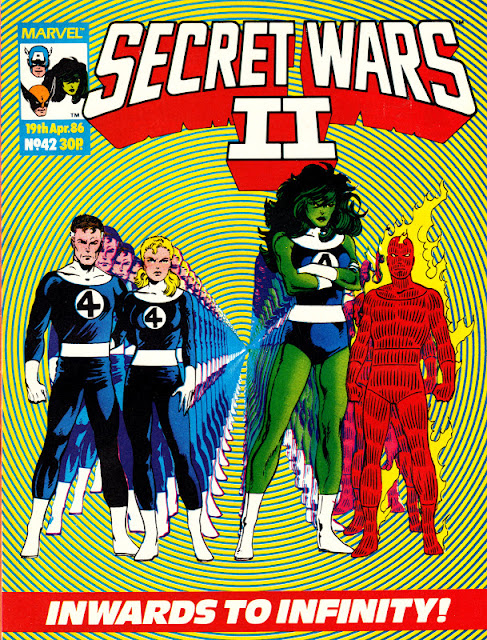 Cover (amended) and contents reprinted from US FANTASTIC FOUR 282 (September 1985).

Lew Stringer's humour strip Macho Man appears in this issue for the first time... and continues to appear sporadically, as space allows, to issue 79. 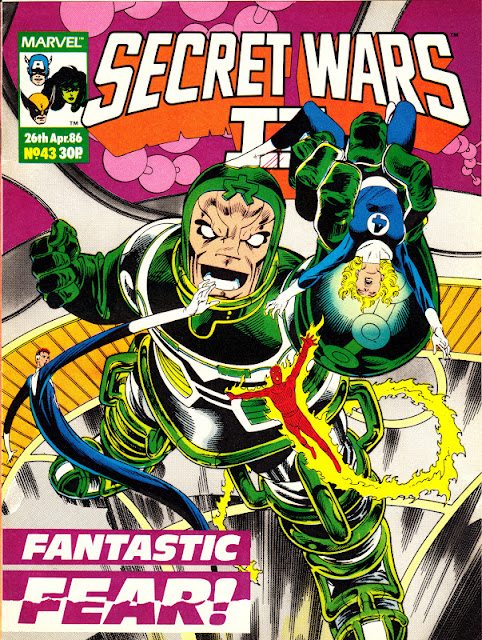 Cover and contents reprinted from US FANTASTIC FOUR 283 (October 1985). 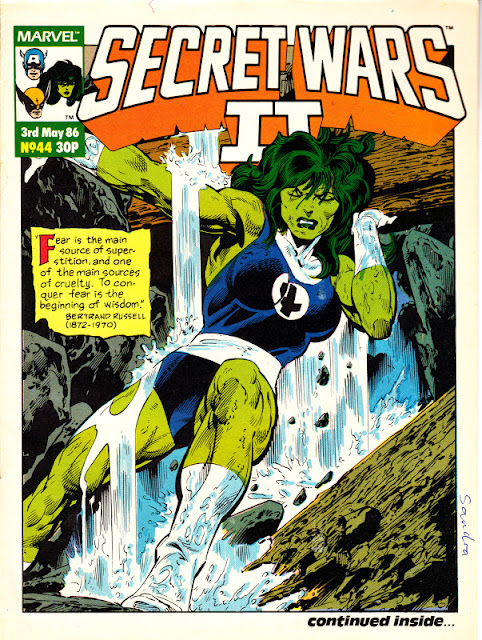 Reprints US FANTASTIC FOUR 284 (November 1985).  The splash page is revised to form the cover. 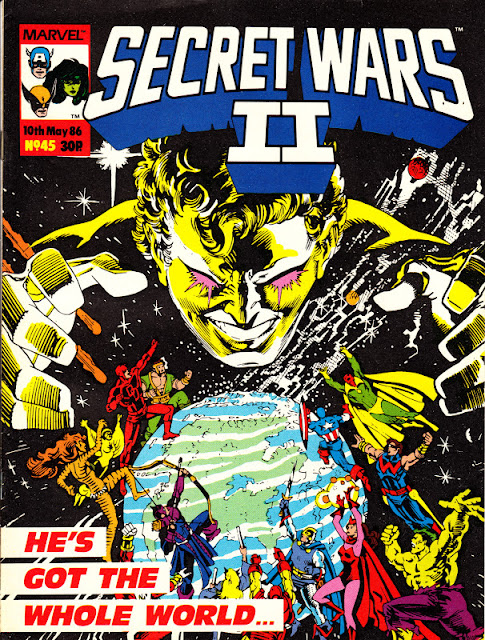 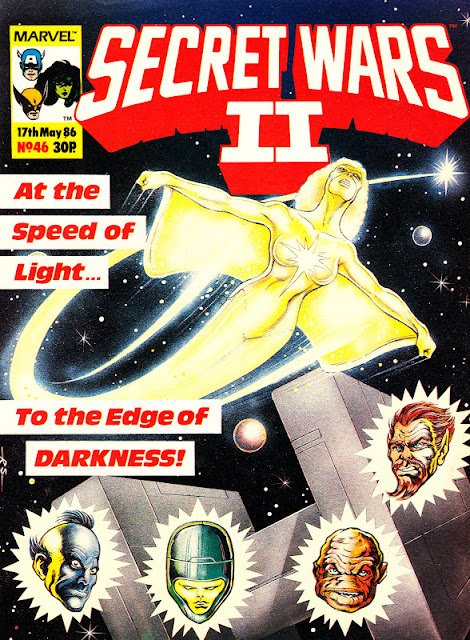 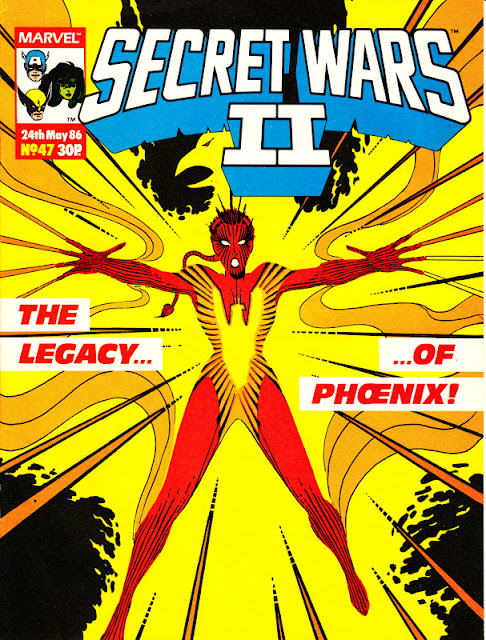 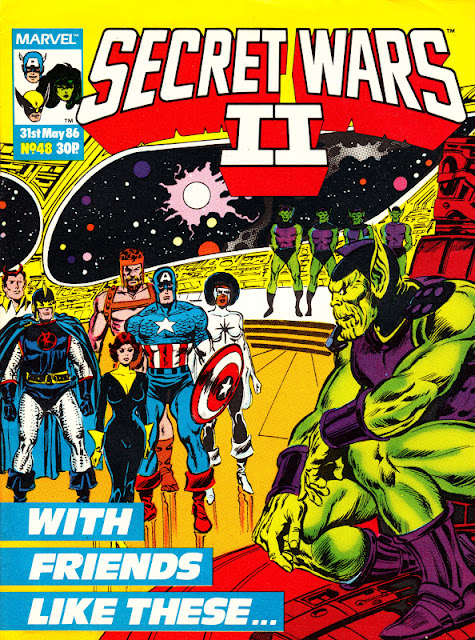 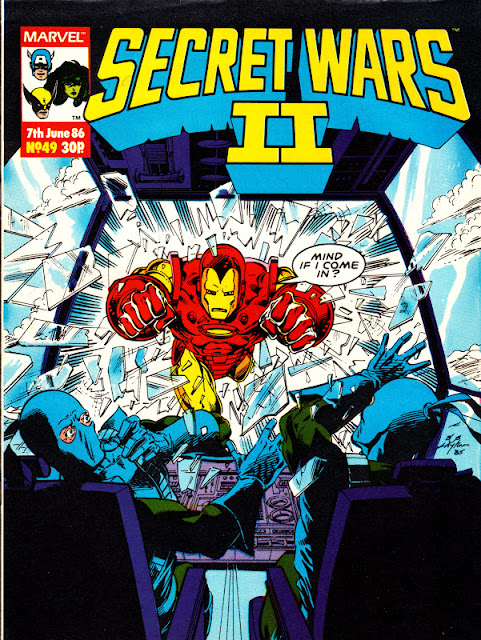 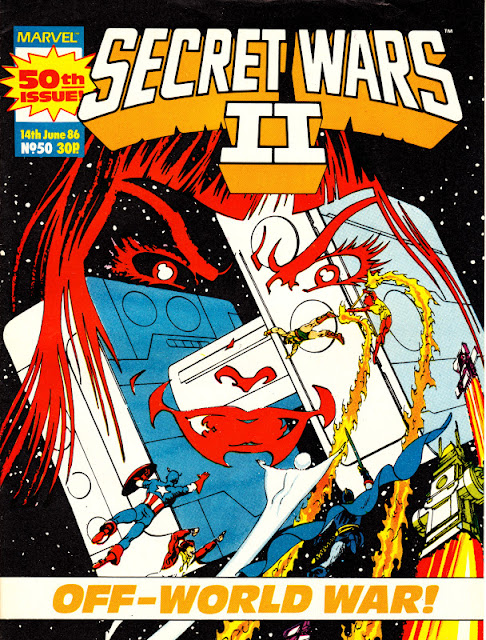