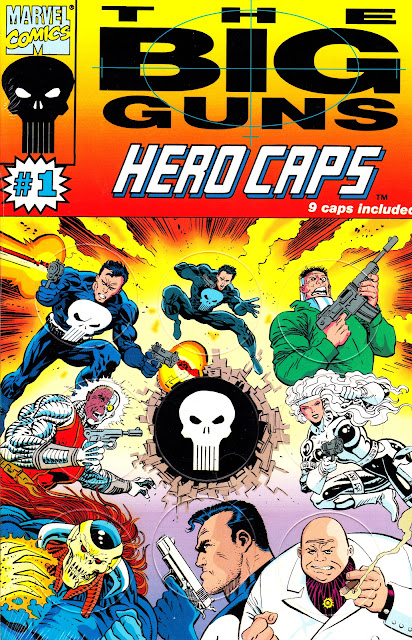 These are better known as POGS (presumably Marvel's lawyers wanted their own Trade Marked brand name) and numerous manufacturers (so I'm not just waggling my finger in a disapproving fashion at Marvel) thought they might become as collectable as baseball cards (and - ahem - comics) in the speculator-fueled dash-for-cash of the early 1990s.

As you'll see below, this set (basically a single sheet of shrink-wrapped thick card) was one of several cranked-out by Marvel (although, with the exception of the MIDNIGHT SONS supernatural characters set, I have no idea if the other sets were actually ever released).

BIG GUNS was a blatant Marvel promotional push featuring - unsurprisingly - some of their more violent characters including - hurrah - DEATH'S HEAD II from across the pond.  The Punisher was - as you can tell - the line's anchor character.

The inclusion of the British anti-hero certainly paid dividends as sales on the early issues were - apparently - excellent.  Which explains M-UK's unrestrained expansion into the US market and the copious cross-promoting crossovers which slapped DH II into every other conceivable British title.

I picked this still-wrapped item up for - ahem - 10p recently.  Who says this isn't the Mighty Marvel age of bargains?!? 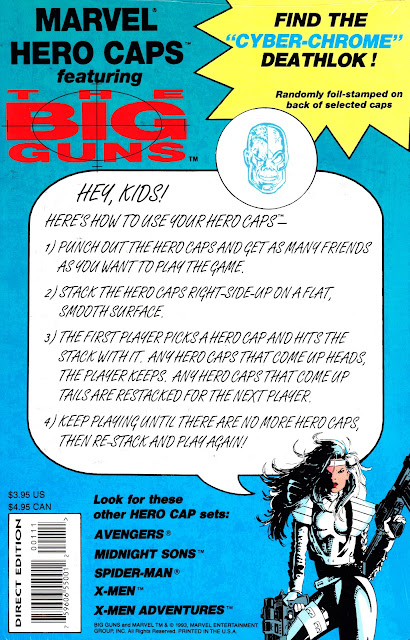