1983: RETURN OF THE JEDI Marvel Paperback 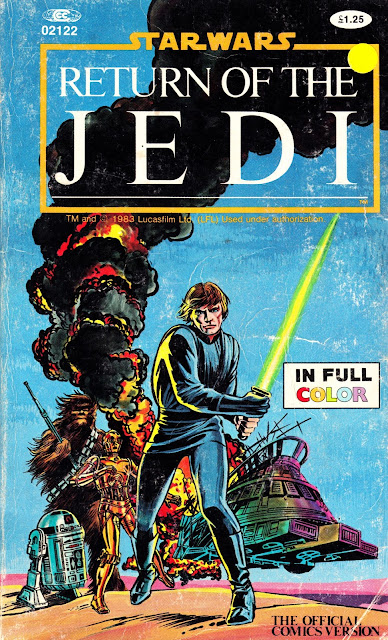 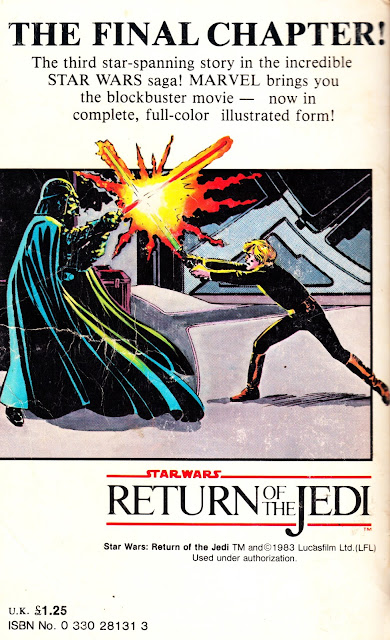 From 1983: the paperback release of Marvel's RETURN OF THE JEDI adaptation.

This is the (nominally) British version with the dollar price substituted for a UK price.  This was sold widely in the UK, I got my copy from Colchester's Martins the Newsagent (actually it was Martins-the-pretty-much-everything as it was a large store that also sold books, entertainment, stationary and boasted a coffee shop.  It later became part of the John Menzies chain and, despite an extensive refit, closed after the chain was purchased by WH Smiths... basically an expensive way of eliminating their competition) in the summer of '83.  This isn't that copy... I bought this replacement from a secondhand book store a few years ago.

With the exception of the price change, this is identical (right down to the spelling "mistake" on the cover) to the US edition.  Confused buyers even had the chance to subscribe to Marvel's US monthlies courtesy of a back-of-book house ad.

It was either this or the Super Special magazine that wrecked Lucasfilm's careful plans to keep the movie's plot under wraps until opening day.  Marvel's distribution proved too efficient and copies hit the stores before the film was released.  Whoops.

This joined a long list of editions for the adaptation.  They also included:
Posted by SLOW ROBOT at 18:15