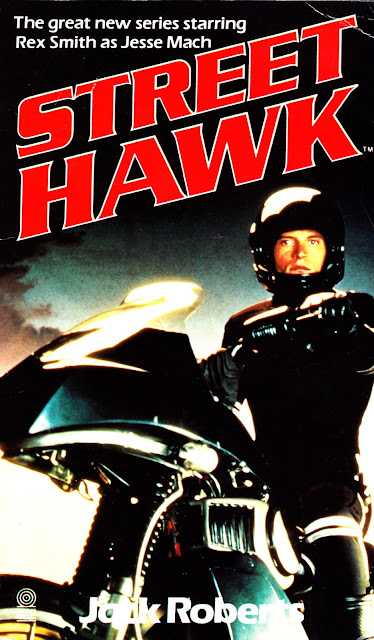 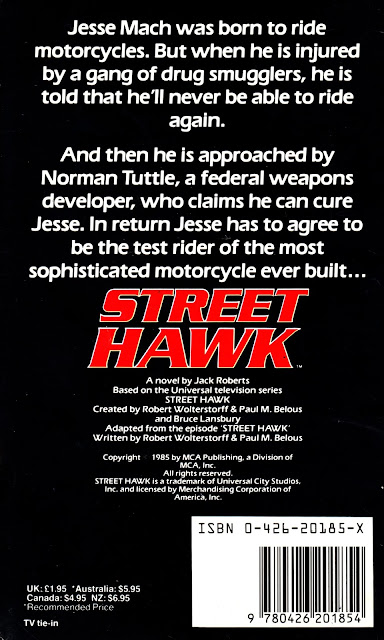 From 1985: the first (of four) novelizations based on the brief TV series STREET HAWK.

The first rule of TV is that success spawns imitation (just look at all the X-FILES knockoffs that cluttered the schedules in the 1990s... even BAYWATCH had a punt) so it's traditional for each new season to start with a raft of series that are lawyer-baiting clones of whatever show had been the breakout hit of the previous year.

KNIGHT RIDER had been a breakout hit for NBC from its debut in 1982, sparking a brief dalliance in similar high-tech-hardware shows over the next few seasons.  BLUE THUNDER aired from January to May 1984, AIRWOLF trumped that with an extended flight which started the same month and lasted through to 1987 and STREET HAWK aired from January-May 1985.

NBC, watching "V"'s ratings plummet faster than stock footage of a Sky Fighter crashing, even offered the show a cash injection to bankroll a futuristic car for the Resistance.  Warner Brothers passed.

STREET HAWK, which has all the hallmarks of a Larson show... but isn't, is a variation on the KR theme.  Herein, Jessie Mach (Rex Smith... latterly Daredevil in one of the INCREDIBLE HULK reunion movies from New World) is a cop with a double-life as a top secret, government bankrolled vigilante.  On a bike.

It only clocked-up thirteen episodes before ABC called time although I think, like AUTOMAN and MANIMAL (two shows that did emerge from Larson's febrile mind), most people probably assume it lasted longer.

The UK seemed to take to it in a big way: Target signed-up for four of these novelizations (this one adapts the feature-length pilot) and there was also the traditional annual and a Poster Magazine.

It also seems to have spawned two different computer games for the ZX Spectrum.  A rush-released 1985 version (which garnered poor reviews) and a refined 1986 version.
Posted by SLOW ROBOT at 07:18