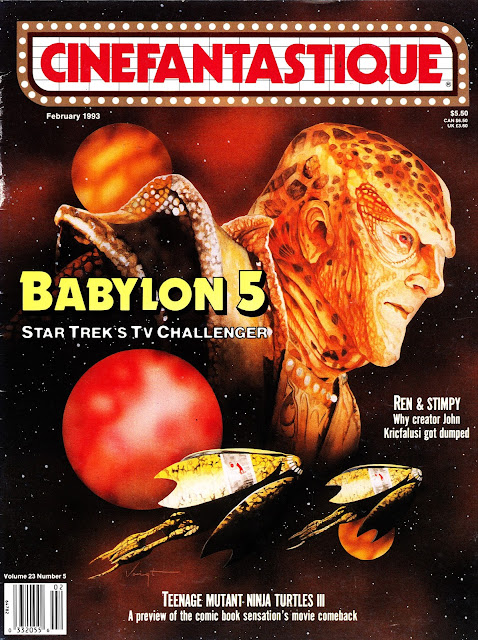 From February 1993: The long-running US magazine CINEFANTASTIQUE celebrates BABYLON FIVE's inaugural outing with a cover and extensive feature dedicated to the making of THE GATHERING, the feature-length pilot that (after some extensive retooling) spawned the series.

I first saw the B5 pilot on VHS, courtesy of a rental (but not ex-rental) tape that had somehow worked its way onto the shelves of HMV's (now gone) London flagship store.  I seem to remember it wasn't cheap either (although not astronomical)... you could probably buy several seasons today for the same price I paid for one tape.  Sometimes you have to love the digital age...

I remember being somewhat underwhelmed at the time.  The plot was undeniably interesting and promised great things if the series did go ahead.  But the production standards were a little on the shoddy side (the lighting scheme in the command centre gave the impression that someone had hooked up some disco lights just off camera) and the scripting and performances seemed stilted and loaded with clumsy exposition.

But it was undeniably compelling and did hint that greater things might come of it.  Thankfully the series (which, despite being very much an authored piece, still managed to be uneven) launched with more confidence (and a tweaked cast) and managed to deliver an epic premise on a minute budget.

The opener was tarted up, courtesy of a few thousand dollars from the TNT kitty, in 1998.  The edit was revised, accompanied by a new score and new visual effects.  It's this version that was released on DVD, making the original hard to find.

CINEFANTASTIQUE made highly-detailed season retrospectives their enviable USP throughout the telefantasy boom on the late Star Age.
Posted by SLOW ROBOT at 08:06