1982: STAR WARS and THE EMPIRE STRIKES BACK UK DOUBLE-BILL 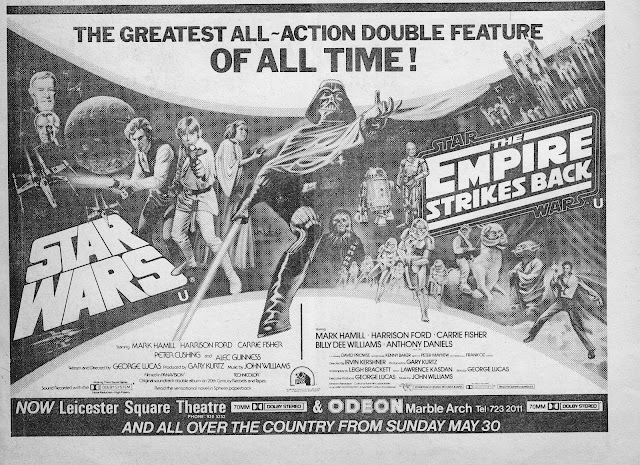 It's May 1982 and REVENGE (ahem - RETURN) OF THE JEDI is still a year-or-so away.  Is Darth really Luke's dad?  Who is "the other"?  Ill-advised speculation (It's Biggs!  It's Wedge!) is running riot in Cosmic Correspondence.  What's a fan-boy to do?

Never fear!  George Lucas, never one to miss a commercial opportunity, has the solution.  A theatrical re-release of the first two chapters.  On the big screen where they belong (and without silly "Special Edition" dickering).

This advert appeared in Marvel UK's SPIDER-MAN (and probably in other titles too) to keep fans in the loop.

I don't recall whether I went to see this double bill but it's entirely possible.  I was certainly there (Colchester!) for ROTJ the following summer.
Posted by SLOW ROBOT at 07:17