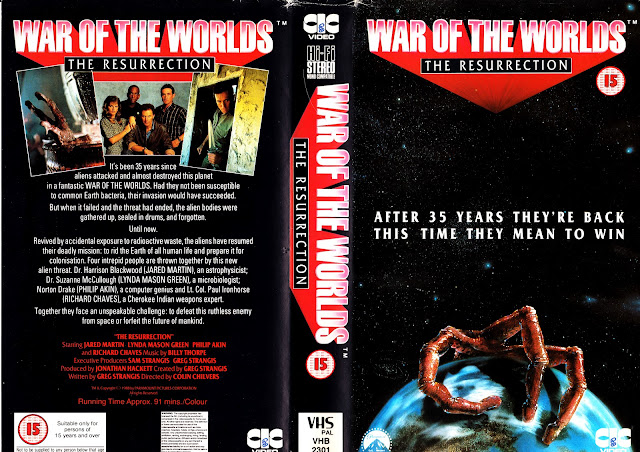 CIC was the video label, jointly run by Paramount and Universal, responsible for releasing their productions on home video in the UK.

CIC had already done well with a series of rental-only STAR TREK: THE NEXT GENERATION tapes assembled from the first season, so it made sense that they would try to replicate that success with syndicated companion show WAR OF THE WORLDS.

This is the sleeve for the first release: the feature-length first episode that establishes the (shaky) premise of the show and - as the title suggests - resurrects the long-dorment Martian menace (albeit now with TV budget-friendly abilities to adopt human form).

It's a competent effort, undermined by a ludicrous premise: turns out Earth was indeed invaded - as shown with various effects shots lifted directly from the original movie (and blatantly reused a few years earlier in cash-strapped V: THE SERIES) - decades earlier and, despite the wholesale destruction, almost everyone (including top military decision makers) has forgotten all about it.  This allows the show to adopt a low-key conspiracy tone (years before THE X-FILES) but is too bonkers to be believable.

The alien 'corpses' left over from the failed invasion have been haphazardly placed into storage, unfortunately adjacent to some equally shoddily stored nuclear waste.  When the two are accidentally mixed, by some ill-fated terrorists of indeterminate nationalities, the invasion is on again.

CIC released a few more of these tapes before abandoning the range.  None of the tapes were ever re-issued for the (much cheaper) sell-through market (unlike ST:TNG which saw the whole seven seasons released... and then re-released in assorted collections, edits and box sets).
Posted by SLOW ROBOT at 07:04

Email ThisBlogThis!Share to TwitterShare to FacebookShare to Pinterest
Labels: 1988, THE WAR OF THE WORLDS