From August 1991: the first issue of Innovation's ongoing (at least until the publisher went bust) LOST IN SPACE comic book.

This series attracted some (not undeserved) early criticism for sexing up the shenanigans and making the Robinson gals (pretty much paragons of virtue in the family-friendly CBS crowd pleaser) into cheesecake victims of lusty alien life forms. That didn't sit well with fans who probably wanted something a bit more mature than The Great Vegetable Rebellion... but not THAT mature.

Things settled down after Innovation took the feedback on board and the title, along with its other TV tie-ins (notably the 1990s DARK SHADOWS, BEAUTY AND THE BEAST and QUANTUM LEAP), became solid reads. Unfortunately Innovation fell foul of the industry contraction of 1993 and went out of business.

LiS returned to comics in 2016... but good luck finding copies as many UK stores didnt seem to keen to stock it. The hardback compilation hit shelves this week. 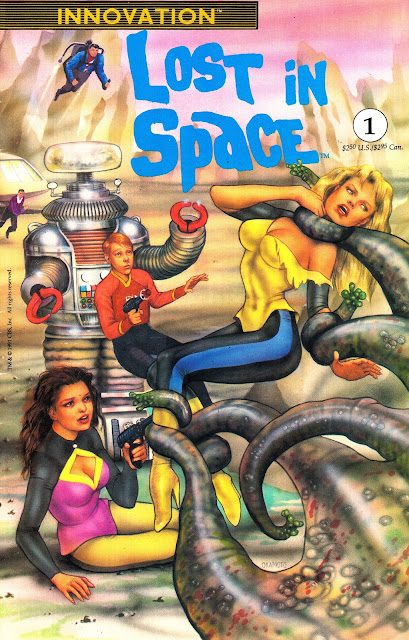