THE MICRONAUTS were firmly established as mainstays of the late seventies/ early eighties Marvel Universe (gosh, they even featured in a four-issue team-up with the X-Men which crossed the Atlantic in the pages of THE MIGHTY WORLD OF MARVEL), regularly featuring guest-shots by other Marvel characters (a win-win situation: kids who liked the toys might be tempted to pick-up other Marvel books whilst Marvel fans, predisposed to giving the licensed book a wide berth might be motivated to pick it up to see what another character was doing).  Only Rom (another MCU interloper) was off-limits.

Until Marvel scrapped the series, to make way for the ill-fated NEW UNIVERSE, and surrendered the license.  Suddenly, like the aforementioned Space Knight, Godzilla, The Transformers and others, it was as if the 'nauts never lived.

This, a one-page guide to their ship the Endeavor, is the sort of thing that - a few years later - would have been a Handbook mainstay.  It appeared in the 4th issue, cover-dated April 1979.

I'm sure a b&w variation of this page also appeared in MARVEL UK's STAR WARS WEEKLY at some point. 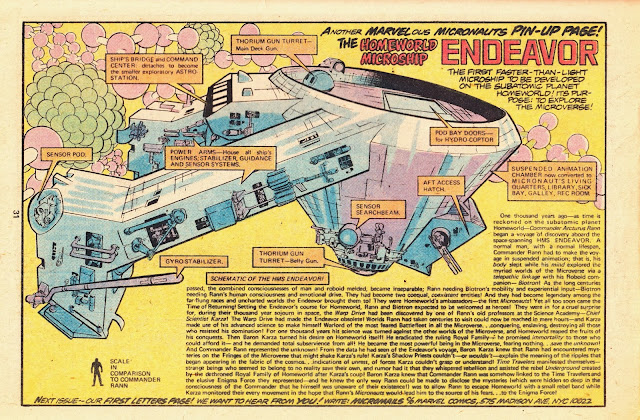 Email ThisBlogThis!Share to TwitterShare to FacebookShare to Pinterest
Labels: 1979, MARVEL COMICS, THE MICRONAUTS, THE MIGHTY WORLD OF MARVEL