This is something that I doubt features too prominently on Dan Abnett's sprawling CV: GILBERT'S FRIDGE.

This one-shot Winter Special, spun-off from the Tyne Tees TV show, was published by MARVEL UK in late 1988. 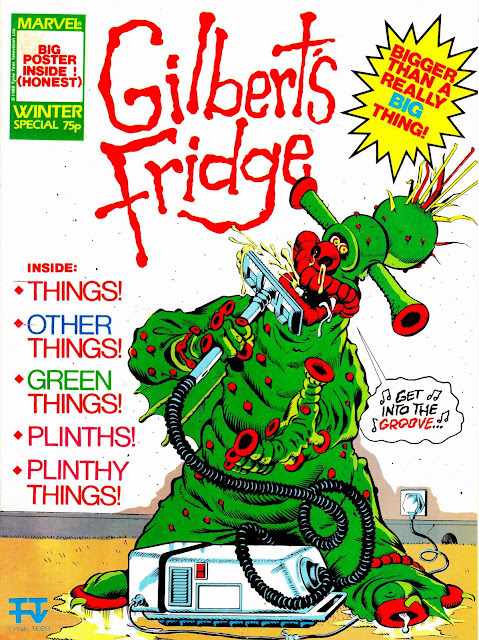 Gilbert the snotty-nosed alien first came to my attention as part of the presenting team of the Saturday (and, latterly, Sunday morning) programme GET FRESH (a live roadshow affair, staged by the ten smaller ITV companies on a rotating basis, that visited a different location - via the fictional Millennium Dustbin space craft - every Saturday morning*) before spinning off into his own show, Gilbert's Fridge, which I believe aired on a weekday afternoon as part of the CITV Children's block.

Here's a bit of Gilbert action:

My other abiding memory of Get Fresh was a live performance by the group PiL which saw John Lydon (who I once briefly met in a radio studio, he seemed perfectly amiable) give the two-fingered salute to camera on an edition live from Bristol Zoo**.  Thankfully, it was recorded for prosperity here:


**UPDATE: It seems like the PiL posse had previous form when it came to behaving unpredictably, and being unable to hide their disdain, on (as) live TV.  Here's their appearance on the US version of Top Of The Pops, AMERICAN BANDSTAND, from 1980.  It's completely by chance I read about this at the weekend…**

* The Sunday morning programme, which was pre-recorded and consisted on one full half-hour and series of inter-programme continuity links, took part in the bowls of the Dustbin and was actually shot at Border TV's studios in Carlisle.

** Zoos must have been a favoured landing site for the show, I recall another episode from Colchester Zoo, the nearest the show ever came to where I lived.
Posted by SLOW ROBOT at 07:47

Email ThisBlogThis!Share to TwitterShare to FacebookShare to Pinterest
Labels: 1988, GET FRESH, MARVEL UK