From 1981: the first hardback STARBURST ANNUAL, published by Marvel/ Grandreams.

Unliked the second (and final) edition, this didn't riff on a single theme (the second book focused on classic monster movies just as the Great British Public, and press, were becoming obsessed with slasher movies and video nasties) but instead took a broader approach more typical of an average issue of the magazine itself.

Some of the features were traditional, easy-to-assemble, mainstream crowd pleasers like photo features on "robots". The sort of lazy page filling that just wouldn't pass muster today.

The main cover image is from BUCK ROGERS IN THE 25th CENTURY, released in UK cinemas some two years earlier. The designer obviously thought that the spot was spectacular yet ambiguous enough (the two Hollywood stuntmen are kitted out as Draconian pilots having a bad day when their fighters start exploding as they launch) to make the grade. 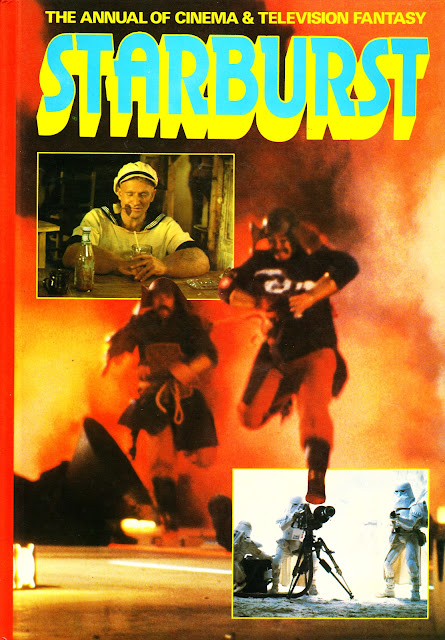