From 1988: the DC Comics adaptation of the ALIEN NATION movie.

Marvel were masters of stretching their movie adaptations over several issues (although they often issued them as done-in-one magazines or books as well) but DC preferred to recreate the viewing experience more faithfully by restricting their movie books to extended-length one-shots.

This ALIEN NATION tie-in was no exception.

Its a pretty standard, but still entertaining, riff on the familiar buddy-cop formula by making one of the bickering detectives an off-worlder and making the crime they investigate related to these "Newcomers".

The movie, which boasts a great cast, presumably did OK business but not enough to tempt Fox into making it a franchise.

Except the newly launched TV part of the business was looking for new shows that whilst superficially similar to normal telly fare, tweeked the formula sufficiently to give a twist on the tried and familiar. Alien Nation fitted the bill and blasted back as a weekly series, now overseen by Kenneth (" V") Johnson.

The feature-length pilot, with a whole new cast, doubled as a follow-up to the first flick (Fox were clearly thinking that it could double as a straight-to-tape sequel overseas) but, after that, Johnson used TV's generous running time to flesh out the world of the near future and use the aliens for a bit of (occasionally on the nose) social commentary.

The series fell victim, after only a season, to a change of policy at Fox which saw the new semi-network dump its expensive but soft rated one-hour dramas in favour of less risky sitcoms (inspired by the success of THE SIMPSONS and MARRIED: WITH CHILDREN).

The TV show inspired the Adventure Comics subsidery of Malibu to launch a seccession of mini-series set in the same world but, with one exception, no direct link to the show. I've posted those series in the past.

Fox eventually revived the TV incarnation as a package of five TV movies.

The film, weekly series and movie package have all been released on DVD. 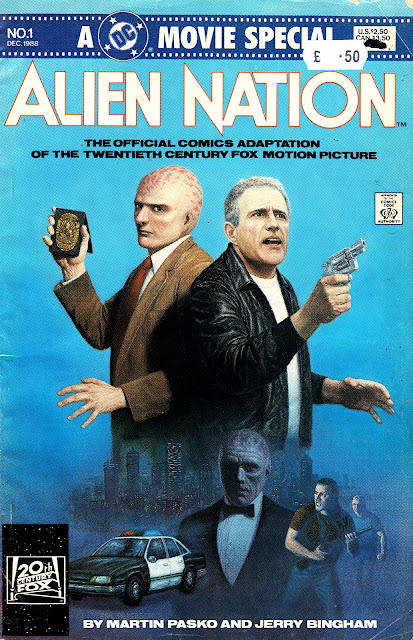