From March 1993: a Dark Horse International House Ad for the seventh issue of their STAR WARS monthly.

The first few months of the British edition had reprinted the DARK EMPIRE limited series. The rreplacement was CLASSIC STAR WARS, the reworked versions of the newspaper strips. These were of extra interest to British readers as, as far as I can tell, no UK paper ran them in the early Eighties. Even now, they have been out-of-print again for more than twenty years.

The backup strip was still, in a nostalgic nod to the Marvel UK monthly/ weekly circa 1983, reprints of the Dark Horse Indiana Jones adventures.

Casual and lapsed readers were lured in with a free cover-mounted "May the Force be with you" pin badge.

Despite these attractions, and a resurgence of interest in the saga, the revival was not a great success and shuttered after only ten issues.

The run is worth seeking out because the good print quality, and larger page sizes, are a nice showcase for the art. 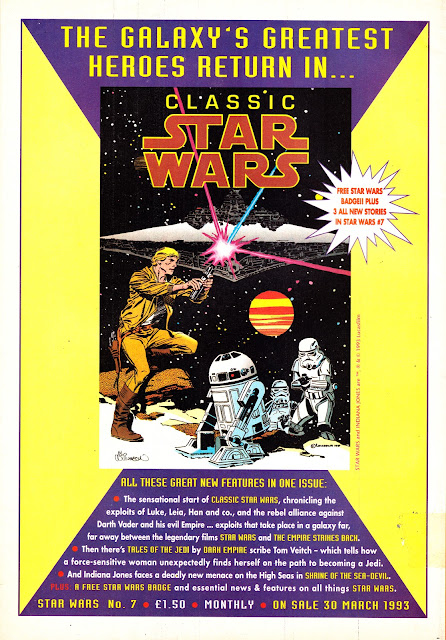