This first cover (art by Mike Okamoto) perfectly sums up the principle problem with the series: although it was officially licensed, and latterly penned by no less than Bill Mumy itself, it initially sexualized the female members of the Jupiter II in a series of cheesecake scenarios the wholesome-but-dumb-after-season-one would never have dared. Fans were hoping for a more mature take... But not like that. The cover of the fourth issue looked more like a Michael Winner SF movie than a continuation of the TV show. An odd strategy for an indy which largely acquired the rights to media properties with strong female appeal.

The main book ran eighteen issues. The first year was a mixture of done-in-one and multi-part stories. Year two kicked-off (with obligatory silver foil cover) the twelve part Voyage to the bottom of the Soul (a riff on another Irwin Allen show) arc. Unfortunately Innovation (also publishing DARK SHADOWS, QUANTUM LEAP and BEAUTY AND THE BEAST amongst others) floundered and the title closed before the storyline could be resolved. The whole arc was later reprinted in a hard to find (and when I did find a copy, the optimistic dealer wanted £50. I passed) trade paperback.

The main book also spun off an Annual, a Special Edition (a reprint of the sold out first issue with additional feature pages) and Project: Robinson, a two-issue series which was cut short after only the first edition hit stores.

Innovation closed on 31 December 1993 when an investor hastily called in a loan as the comics market faltered. Other casualties that holiday season included Marvel UK's Genesis line of UKverse titles. 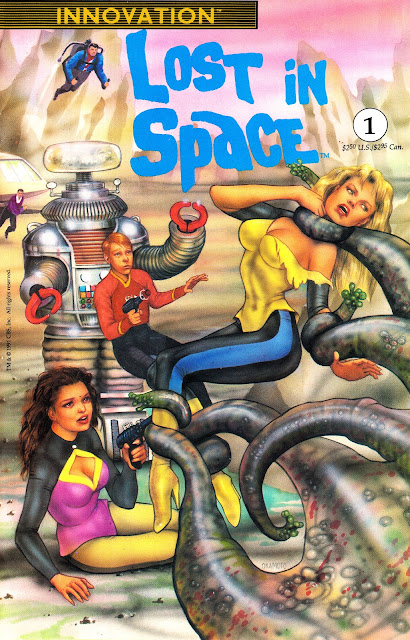