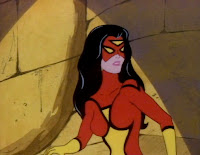 Here's the title sequence of the Fall 1979 SPIDER-WOMAN animated series.  The show belatedly reached the UK in January 1983.  Better late than never I guess.

The show was produced by animation old hands DePatie-Freleng Enterprises, shortly before their purchase by Cadence Industries and their metamorphosis into Marvel Productions. 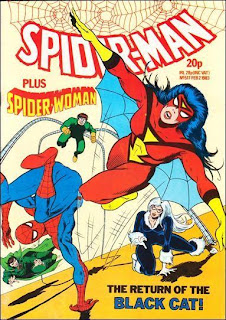 Marvel UK capitalised on the show's UK debut by adding Spider-Woman reprints, as a back-up feature, to SPIDER-MAN weekly (from issue 517, cover-dated 2 February 1983). The comic had previously featured the character, again as a supporting feature, in its SPIDER-MAN AND HULK WEEKLY incarnation, from issue 376 (cover-dated 22 May 1980) alongside Spider-man, Hulk and She-Hulk strips.  Jessica never did get her own British comic but she did earn an (inexplicably timed) Winter Special one-shot in 1989.

In the US, Spider-Woman's own comic ran from (cover dates) April 1978 to June 1983 following a one-issue copyright-nabbing debut in MARVEL SPOTLIGHT 32 (February 1977).  Her solo adventures clocked-up 50 issues (collected in two MARVEL ESSENTIALS volumes).

The complete Spider-Woman animated series (16 episodes) is available on DVD in the UK.