Here are two adverts for Grandreams 1984 annuals, published in the autumn of 1983.  The spots appeared in the pages of Marvel UK's weeklies in the later part of '83.

There's a few fun things to note:
- The action/ adventure shows we were watching at the time: it looks like an ideal action/ adventure route-to-midnight today.  Boxleitner's BRING 'EM BACK ALIVE (another show, like TALES OF THE GOLD MONKEY, keen to recreate the success of RAIDERS OF THE LOST ARK) has largely been forgotten by history (it aired on ITV here in the UK) and really deserves a belated box set release.

- The RETURN OF THE JEDI annual in the advert has a different cover than the published one and the image is presumably (unless you know better) a pre-press mock-up.  The 1984 annual featured Marvel's movie adaptation and actually used the familiar cover artwork which also graced the US SUPER SPECIAL and issue one of the UK weekly.

- THUNDERBIRDS 2086, a Japanese animated series loosely based on Gerry Anderson's classic (ITC couldn't sue, their Tokyo office made it!), was something of a premature release.  Grandreams obviously expected a UK broadcast to coincide with the annual's release but BBC ONE didn't run the show until 1986!  The annual, especially the copious amounts of geek-friendly hardware, was still cool enough to go on the Christmas list... especially as it teased televisual treats to come.

- SPIDER-WOMAN was basking in the success of her 1979 animated show which, belatedly, reached the  UK in early 1983.

-  Readers to lazy to wander down to their local John Menzies or W.H. Smith were encouraged to mail-away for their goodies.  Marvel were still using their Jadwin House address (shared with.... Grandreams!) as their publishing and editorial address but Redan Place, their new home, was already their mail-order base.

- Marvel and Grandreams were thick-as-thieves but only some of the annuals (the obvious ones.. plus Return of the Jedi) were official co-productions. 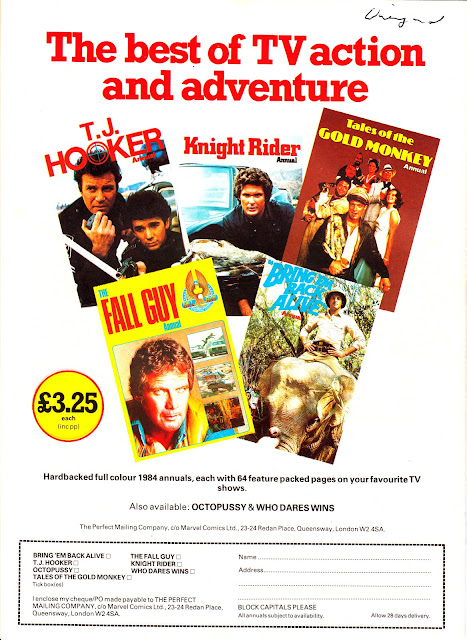 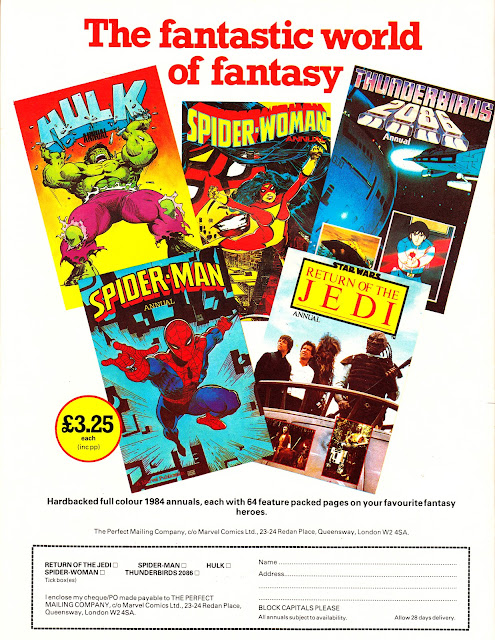