In the seventies and eighties, Marvel loved their movie adaptations.  After hitting pay-dirt with their STAR WARS comics, Marvel rushed to make sure they secured as many licenses as possible in the hopes that one would spawn the next-big-thing (BATTLESTAR GALACTICA: maybe, ANNIE: maybe not).

The irregularly scheduled full-colour MARVEL SUPER SPECIAL magazine was the perfect vehicle for these adaptations, publishing the whole story in a single issue in a superior format.

The MSS didn't start as a home for movie adaptations (although the first two were based on non-Marvel properties) but they quickly became the main attraction with only occasional issues featuring Marvel characters (and never their super heroes or other characters from the main four-colour line).

The movie adaptations, from numerous creative teams, were, for deadline reasons, often based on shooting scripts (or just earlier drafts of the script) and not the final edit of the movie.  These inadvertently provide a fascinating insight into how a movie was intended to be structured before it entered the edited suite.  Conversely, Marvel's creators were occasionally forced to make their own edits in order to make the movie work in comics form.

Some MSS were imported and distributed widely in the UK (the CLOSE ENCOUNTERS OF THE THIRD KIND edition was heavily plugged in Marvel's UK weeklies) whilst others didn't cross the Atlantic in any great numbers either because of lack of interest (not every film Marvel adapted became a hit) or because Marvel UK planned their own edition (often as a hardback annual).

SGT. PEPPER'S LONELY HEARTS CLUB BAND, starring the Bee Gees, was considered such a stinker that Marvel didn't even bother to publish it although foreign language editions (French, Japanese and Dutch) did appear under license.

Marvel managed to stretch the MSS material as far as possible and often reissued the same material as a limited series (often with new covers and additional interior artwork), treasury editions or paperbacks (with panels split over far more pages to ensure they remained legible).

The MSS format was phased-out in the eighties (appropriately, the HOWARD THE DUCK movie adaptation was the final nail in the coffin) as movie adaptations became less attractive in the age of VHS.  However, Marvel (and other publishers) did continue to issue the occasional comic book version of films.

In this guide we've noted other US and UK editions published DURING the Slow-Robot era (roughly 1972-1995).  Some (like KISS, BATTLESTAR GALACTICA and, of course, STAR WARS) have been issued more recently. 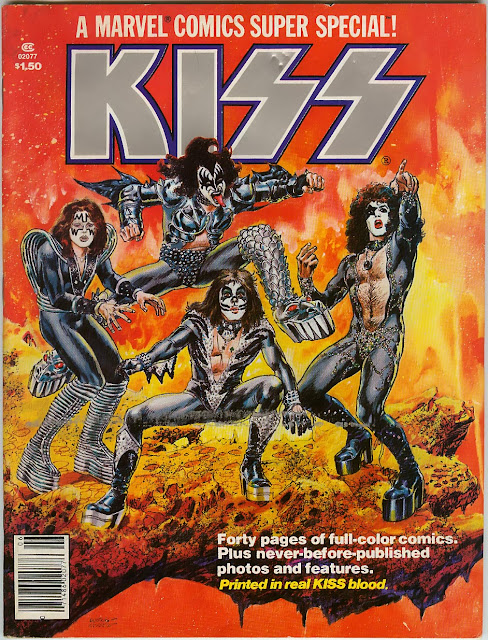 Famously, KISS mixed their blood with the ink used to print this magazine. 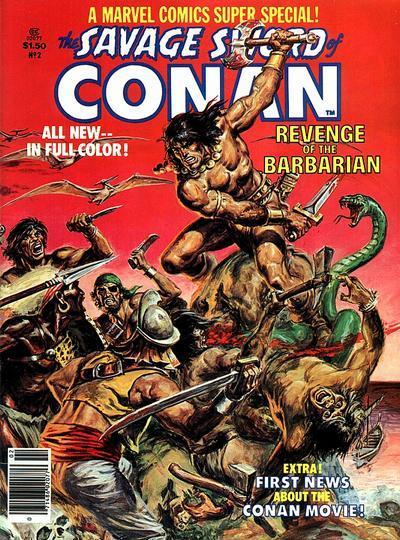 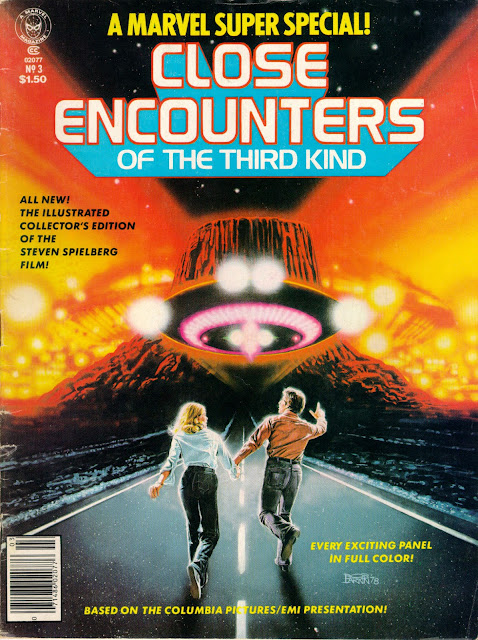 Copies were imported into the UK and promoted in the Marvel UK weeklies.

Marvel UK House Ads can be found here and here. 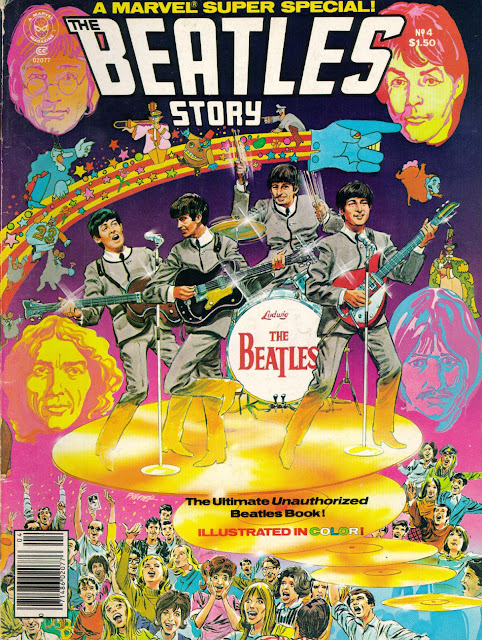 Biography of the band. 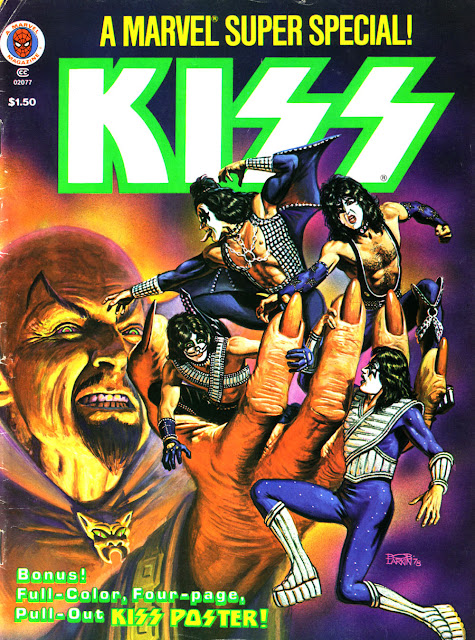 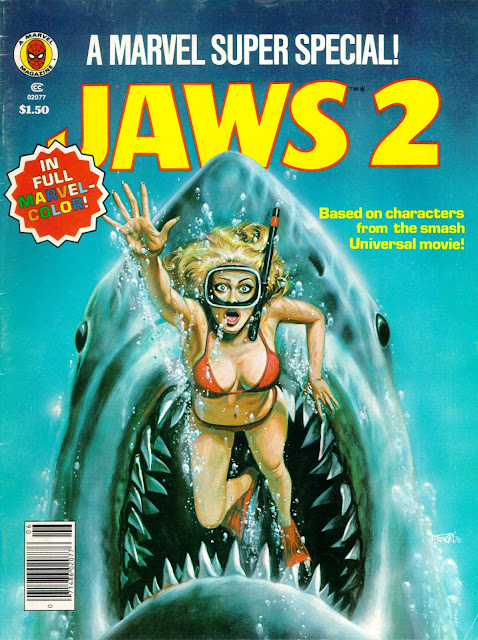 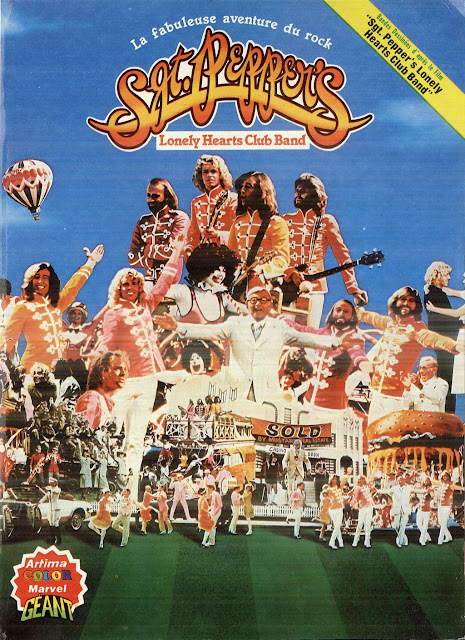 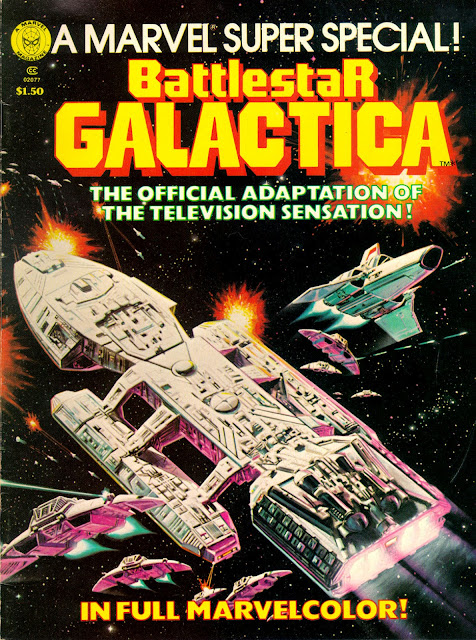 Because of deadline issues, this adaptation had to be produced while the pilot movie, Saga of a Star World, was still shooting.  It contains a number of plotting and artwork discrepancies compared with the final broadcast version. These were fixed for the version serialised in the first three issues of the regular Marvel monthly.

OTHER EDITIONS:
Treasury Edition (US)*
Paperback Edition (US)**
Battlestar Galactica regular series 1-3 (US)***

* Contents the same as the Super Special.  Not part of the numbered Treasury Edition series.  Copies distributed in UK newsagents.
** Pages reworked to fit the paperback format.  Copies imported into the UK.
*** Published later.  Script and artwork reworked to better reflect the broadcast version. 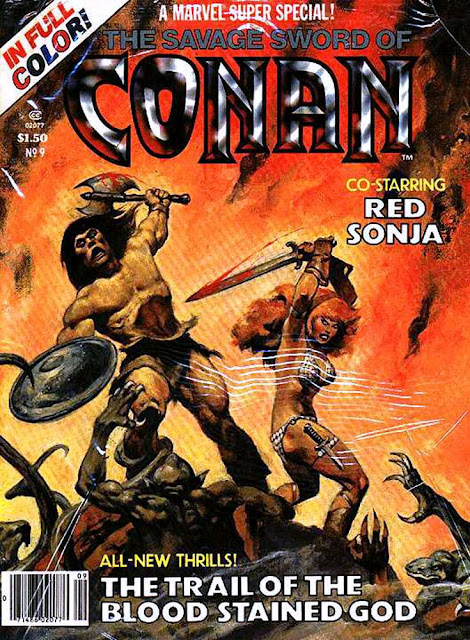 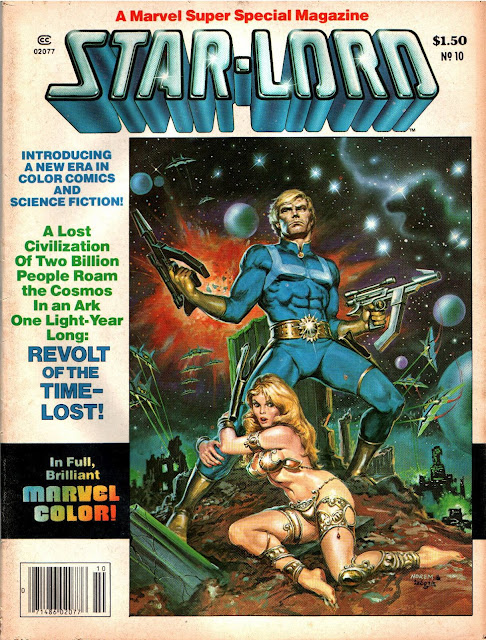 OTHER EDITIONS:
Star Lord was serialised as a back-up strip in STAR WARS WEEKLY (UK). 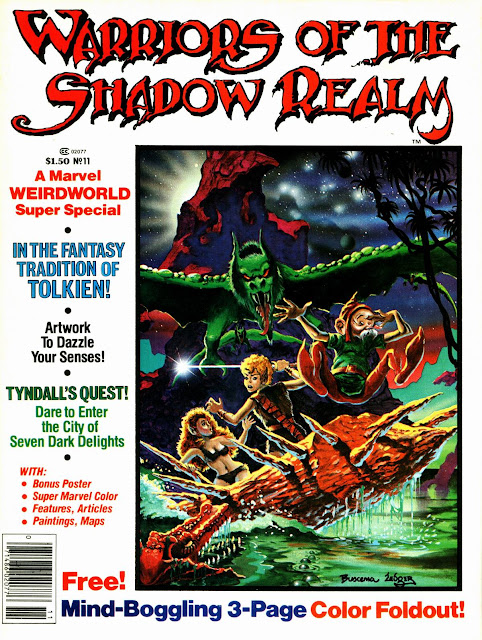 OTHER EDITIONS:
The Weirdworld series was serialised in VALOUR and continued in FUTURE TENSE AND VALOUR (Marvel UK) 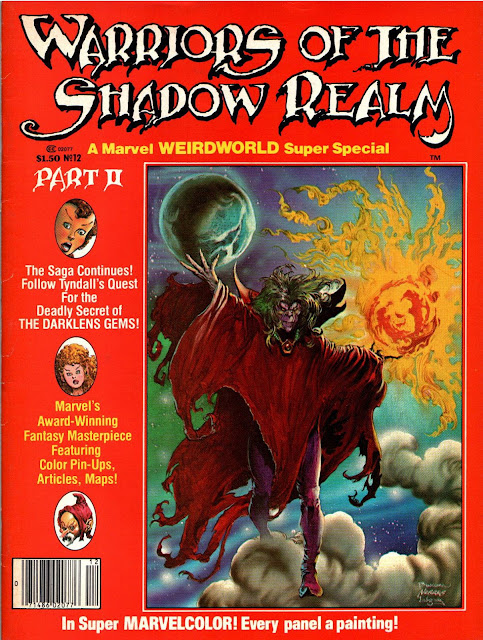 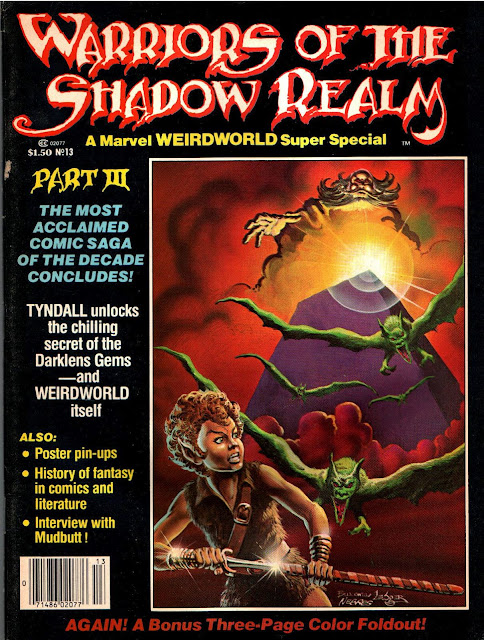 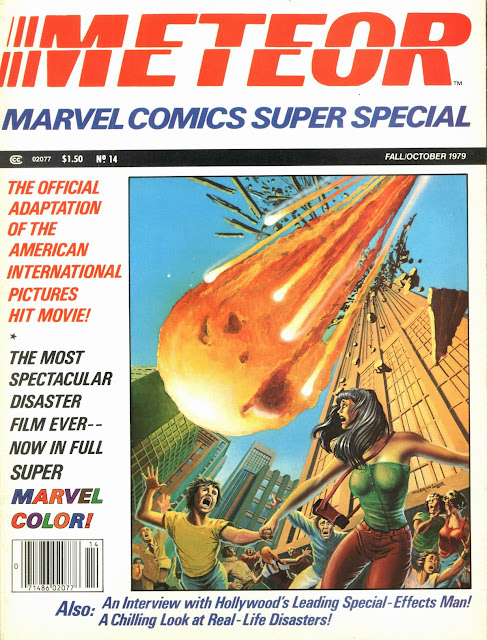 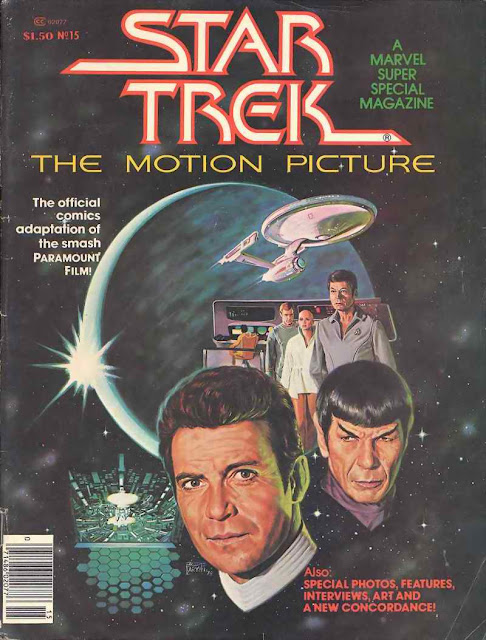 * There's a discrepancy in dates here, presumably the result of some juggling of publishing schedules, possibly at Hollywood's behest. 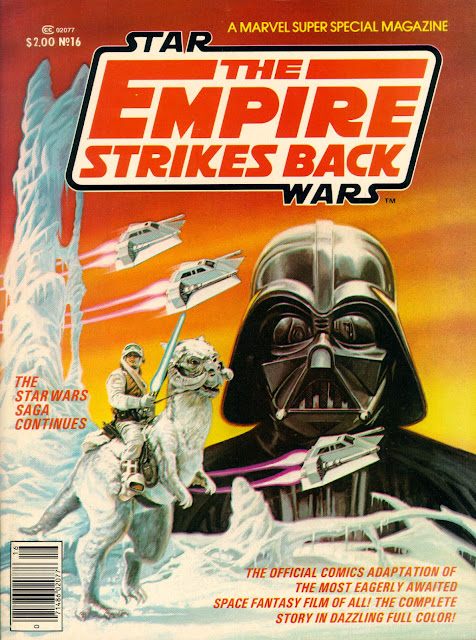 The version of Yoda in this edition (small and purple) was based on pre-production art.  The artwork was corrected for later editions.

Features several scenes deleted from the final edit of the film. 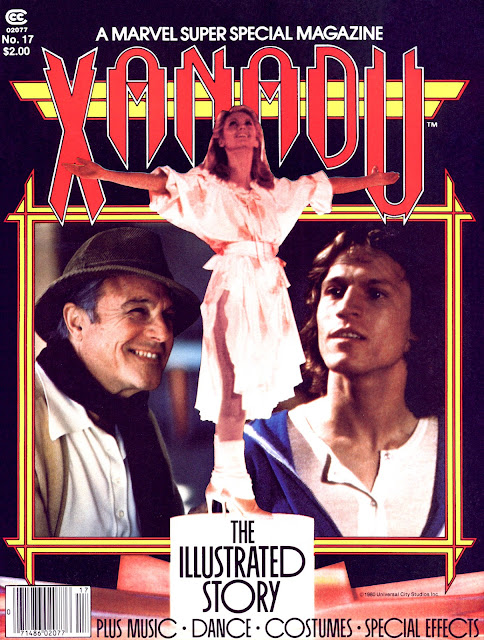 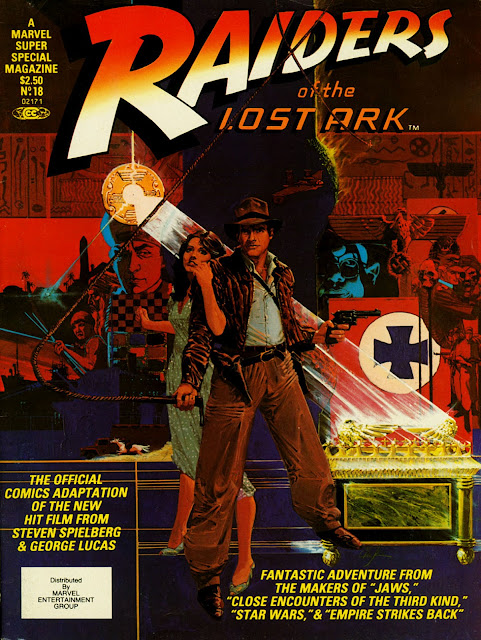 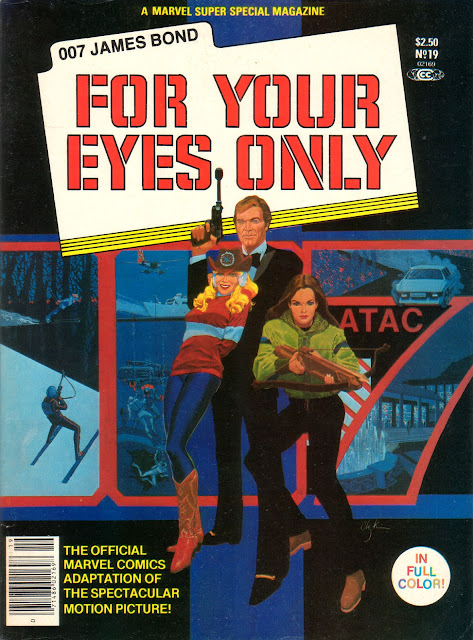 OTHER EDITIONS:
FOR YOUR EYES ONLY 2-issue limited series (US)
STAR WARS: RETURN OF THE JEDI WEEKLY (UK)*