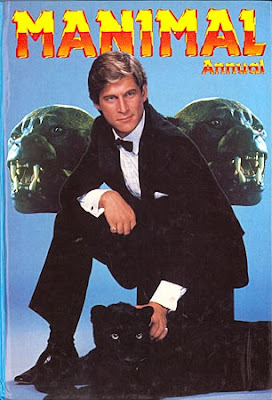 Jonathan Chase: master of the secrets that divide man from animal... animal from man... Manimal.

Remember MANIMAL, the blink-and-you-missed it show that, frankly, made no sense but has retained a cult following?

It's due to (finally) get a DVD release in the UK in the near future (Amazon.co.uk currently has a due date of 27 August 2012) so, to set the scene, here's the show's quintessentially eighties title sequence as well as a couple of Professor Jonathan Chase's (Simon Maccorkindale) painfully predictable transformations.

The short-lived show (a suprisingly-sparse 8 shows including the feature length premiere) was another of schlock meister Glen A. Larson's back-of-an-envelope creations and, like so many of his shows, was a neat premise that lacked any substance.  Manimal, by all accounts something of an industry joke even before its premiere.

Manimal hit US screens in September 1983 (and reached the UK, in a prime time BBC ONE slot, in June 1984).  At the same time, Larson was also producing his other short-lived gimmick show of the season: the ever-so-slightly-inspired-by-TRON AUTOMAN (which clocked-up a not-much-better 13 shows).

Even by Larson's undemanding standards, Manimal is a pretty juvenile show and it probably would have had more of a fighting chance as either a comic book or a Saturday morning animation.  It does borrow heavily from Ken Johnson's adaptation of THE INCREDIBLE HULK (still the best screen version despite Marvel's big spending blockbusters), specifically the child-pleasing several-transformations-per-episode formula.

Despite Larson's experience in the trenches of weekly TV drama production (this is the man that made BATTLESTAR GALACTICA and BUCK ROGERS IN THE 25th CENTURY a few seasons earlier), it seems like he failed to anticipate the logistics of trying to replicate the Manimal formula episode-after-episode.  Chase's pre-CGI transformations (from professor-of-prosthetics Stan Winston) are technically excellent but quickly become boring when seen episode-after-episode.  Larson doesn't seem to have had the time or budget to add to Chase's repertoire so we see the same few on-screen transformations (panther and hawk, see below) ever week and anything else conveniently happens off-screen.

The show's other problem is that bugger-all makes sense.  Even as an undemanding child, I was left with a lot of questions (and even more after revisiting the show, via bootlegs, a few years ago):
- How do you "learn" to become a shape-shifter?
- He's clearly British (another example of Larson trying to make his James Bond fetish work on the small screen per chance?) but also a Vietnam Vet.  How so?
- Infamously, where do his clothes go when he transforms?  And how does he get them back afterwards?
- Why does it look (and sound) like Chase is having an energetic wank (specifically the "amusing" back-of-the-cab scene) when he transforms?
- If he's such as animal expert, why is Chase's repertoire of transformations so limited?
- How many animal-related crimes could the NYPD conceivably have to deal with?

Despite the sheer stupidity of the shape-shifting shenanigans, the cast do their best to make it work.  The late Simon Maccorkindale does it with dignity and Melody Anderson (FLASH GORDON.  Hurrah!) may not be a great actress but she's a lot of fun.  It's a shame Larson couldn't find something for her to do when he drafted in her former co-star for THE HIGHWAYMAN.

William Conrad (the - err - fat man in JAKE AND THE FAT MAN) provided the narration.  He was a frequent Larson collaborator, performing the same duties on BUCK ROGERS IN THE 25th CENTURY and THE HIGHWAYMAN.

The show made a greater impact in the UK thanks to its peak time slot on the BBC (and, besides, at that time anything from America had a whiff of glamour and sophistication... even when it was pants) and, according to perceived wisdom, also travelled well in other markets (France is often cited as a bastion of Manimal fans... but it it true?).  Larson's decision to revive the character over a decade later (November 1998) in a sneaky attempt to revive the franchise would seem to support that.

NIGHTMAN saw Larson (by now past his producing prime) return to super heroics by adapting the Malibu Comics character (by the time the show aired, Malibu had been snaffled-up by Marvel Comics).  The show is no-great-shakes (and the costume looks terrible) but it still managed to clock-up two seasons in first-run syndication.  The episode Manimal (what else?) surfaced early in season two and saw Maccorkindale reprise the role.  Inexplicably, not only is Chase still transforming... he's now also a time traveller hunting Jack the Ripper.  Nightman was not a show grounded in reality.  Chase's daughter has also grasped the powers of the beast and Larson was clearly using the episode as a back-door pilot for a possible spin-off.  It never happened.  Larson also plundered his back catalogue for a Hasselhoff cameo in Nightman's pilot and an episode which remade a HIGHWAYMAN script (as well as borrowing a shed-load of footage and getting one of the trucks out of storage).

The show's merchandising was, understandably, sparse although Britain did get a single annual, released in 1984 (top left).