Here's a 1989 half-page magazine advert for the low-budget sequel (to Wes Craven's 1982 movie), based on the DC Comics muck monster but in-no-way inspired by Alan Moore's acclaimed run on the monthly.

Scoff you might (with reason) but someone was obviously loving these cheesy B-movies.  USA Network aired a no-budget TV series (also starring Dick Durock) between 1990-93 and FOX waded-in with a short-lived animated version in 1991, apparently designed to flog a large number of tenuously related action figures.

Durock, Hollywood stuntman done good, appeared in numerous film and TV projects.  We salute him for being the barely-seen (a lot of his scenes were left on the cutting room floor) Imperious Leader in BATTLESTAR GALACTICA and, most significantly, the Hulk-with-the-crazy-hair in the memorable INCREDIBLE HULK two-parter The First (about the only time the TV show ventured into a comic book style storyline).

The not-much-cop live-action show lensed at Universal's (who also happened to own USA Network) new Florida theme park/ production base.  Presumably, it was a cheap way of keeping the facility active as well as utilising the Swamp Thing costumes left over from the film.

Perhaps the most surprising thing is that THE RETURN OF THE SWAMP THING even managed to muster a UK theatrical release rather than heading direct to tape. 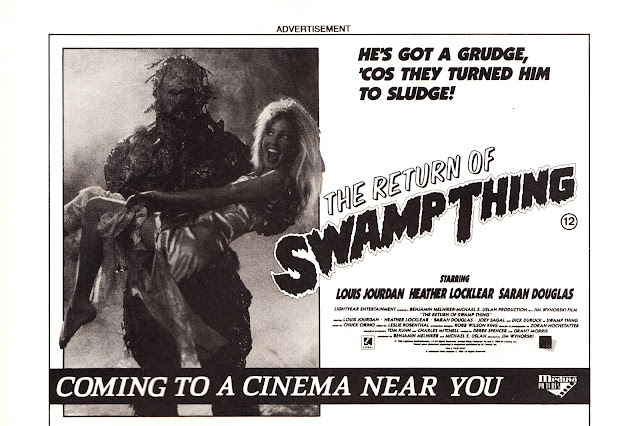