1990: STAR TREK: THE NEXT GENERATION from MARVEL UK

This is the first issue of Marvel UK's licensed STAR TREK: THE NEXT GENERATION comic, launched in November 1990 to roughly coincide with the show's first airing on British TV (shared out between the BBC and B-SKY-B).

It's notably for being almost entirely assembled from material originally produced by Marvel's rival US publishers.  The bulk of each issue consisted of reprints from DC Comics' ST:TNG comic book (beginning with their original six-issue mini-series, produced and published during the show's first season and, initially at least, slightly unsure of the tone of the characters and the show*), padded out with articles lifted from Starlog Group's OFFICIAL STAR TREK: THE NEXT GENERATION MAGAZINE.  Unfortunately, Marvel made no effort to hide the origins of the later, simply rerunning the original US text pages and photos.

Neither the comics nor the magazine had enjoyed mainstream distribution in the UK although both were readily available from specialist retailers and ST:TNG fans, desperate for any fix they could get prior to the show hitting British screens (CIC were releasing episodes for home video although initially only as too-expensive-to-buy rental tapes), were already buying them.

TNG was, in many ways, the quintessential Marvel UK publication (albeit assembled from non-Marvel material): hastily assembled with the minimum of origination and creativity.  Fans hoping for something along the lines of DOCTOR WHO MAGAZINE were very disappointed.

Origination was limited to the covers and some editorial pages.  The former were mostly crudely assembled from TNG's (frequently dull) publicity shots (which often also adorned Starlog's magazine) and actual panels from the DC comic strip.  None of the DC covers were reused, suggesting that either M-UK felt them unsuitable or an extra payment was involved.  The originated editorial pages were restricted to an editorial for each issue and a new letters page.  The whole thing had the feel of a comic hastily assembled by someone on work experience just before deadline.

The cover of the first issue was a fairly crude montage of background art created by Paramount for publicity purposes with art (by Pablo Marcos) from the comic strip slapped over the top.  The free gift was a fabric patch of the sort you might attach to your swimming trunks (if you are seven).

Marvel obviously realised they'd boobed (probably when the sales figures came in) and belatedly relaunched it (with an increased page count, better design and a new logo) as a monthly with issue 20.  The origination budget was also jacked-up and new UK editorial added to increase the title's appeal to more discerning British fans.

However, it was too little, too late and the 24th issue (dated 4 January 1992) was the last.  Unlike many of their publications from this era, the TNG magazine did have an official last issue but didn't merge with another title.

Marvel also published an ST:TNG ANNUAL for Christmas 1991 which followed the exact formula of the fortnightly, making it appear particularly poor value.

This wasn't, of course, Marvel UK's first voyage in the Trekverse: they'd published two standalone STAR TREK holiday specials in the early 1980s as well as serialised Marvel's Trek strips in the pages of FUTURE TENSE.  Marvel's adaptation of STAR TREK: THE MOTION PICTURE had also appeared as an annual by Marvel/ Grandreams.

* DC themselves placed this initial adventure, produced (for deadline reasons) just as the show was starting to shoot, between the pilot Encounter at Farpoint and The Naked Now, the show's first two outings. 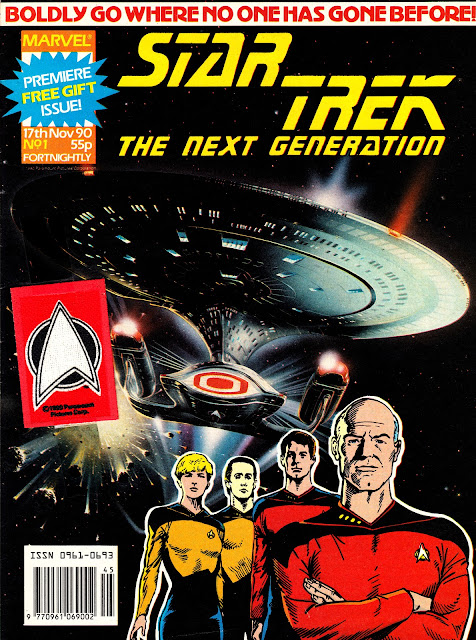