From 1996: the DOCTOR WHO MOVIE SPECIAL, published by Panini to coincide with the premiere of the long-awaited, but short-lived, return.

This glossy one-shot (which wasn't as pink as my scan suggests... Sometimes my scanner does strange things when confronted with certain colour combinations) hit the shelves just as the movie hit the screens. Intended as a primer/ refresher for all things WHO, it caused some disquiet amongst regular readers of DWM who feared it heralded a similar "dumbing down"/ reaching out to the mainstream for the main mag if the movie had been a success and spawned a series.

Such is the way of TV, once the green light was given to shoot the movie (a complicated co-production between BBC TV, BBC WORLDWIDE, UNIVERSAL TV and the FOX network) then things moved fast and the  DWM team found themselves racing to cover the story and have everything ready for the impending airdates on both sides of the Atlantic.

The movie was, broadly, a creative success (and WHO had definitely never looked so good) and certainly not the Hoff-tastic train wreck fandom had long been predicting.

Ratings in the UK, bolstered by plentiful hype and TV listings magazine covers, were great but the reception across the Atlantic was more mooted, killing hopes of either new movies or a new series. The BBC, unable to bankroll a series alone (and still impregnated with a corporate mentality that the show was rather " naff" put the franchise back on the back burner.

As a result, DWM also returned to a business-as-usual approach, devoting its energies to revisiting the past and looking to the present and future being portrayed in the burgeoning audio and print lines. For many readers, it was the magazine's golden age.

Other quick-to-the-shops merchandise pegged directly to the movie included a VHS tape (which was delayed to accommodate last-minute cuts for violence), novelization, script book and postcard book. An excellent "making of" book followed later, a must-read for anyone interested in the movie's complicated, and fraught, journey to the screen.

Sylvester McCoy, returning to the show for his swansong, also recorded an excellent video diary of his time in Vancouver which formed the basis of a fan-made documentary release.

DWM eventually did spawn the sort of easy-access spin-off that this Special piloted. The US-focused DOCTOR WHO INSIDER (borrowing some of  the title from their STAR WARS stablemate) contained a similar mix of material that seemed intended to reach out to American readers unfamiliar with the back story of the series who may have found the regular magazine too inaccessible. It didn't last long. 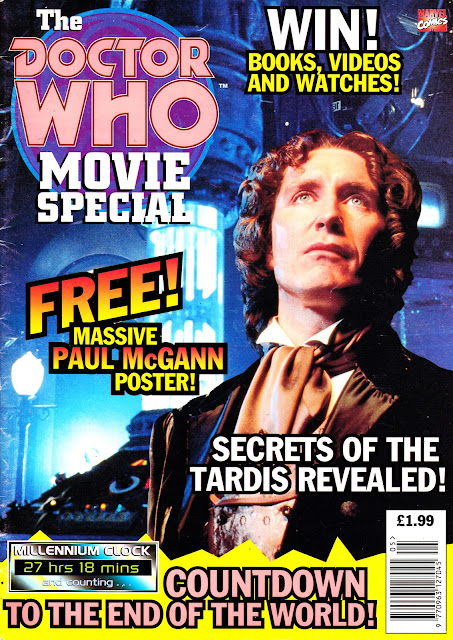 Email ThisBlogThis!Share to TwitterShare to FacebookShare to Pinterest
Labels: 1996, DOCTOR WHO