From the VHS era: another of the tapes in the Universal/ Sci-Fi Channel tie-up which presented a range of found-on-the-channel shows packaged in the same style.

Unlike some of the other shows included in the collection (BUCK ROGERS IN THE 25TH CENTURY, BATTLESTAR GALACTICA, SLIDERS and others), this was the only tape release of AMERICAN GOTHIC in the UK.  Who knew that we were only a few years away from DVD and the chance to own the whole of this one-season-wonder.

I really liked this show back-in-the-day.  I thought the premise - and the performances, writing and direction - were genuinely innovative and not just another one of the jumping-on-the-supernatural-bandwagon shows that cluttered the airwaves at the time.  Clearly the dead hand of a nervous CBS buggered things up a bit (messing with the TX order so it didn't always make much sense, casting changes to try and draw in more viewers and some dumb-but-promotable 'stunt' episodes) but the creative vision remained largely intact.  Like EZ STREETS (another CBS show that sadly went nowhere very fast), it was clearly a made-for-cable (or the new century) show tryig hard to survive in a traditional network environment.  It didn't help that it wasn't pitched at the traditionally older and rural (hello MURDER, SHE WROTE) CBS audience who weren't likely to tune into a sheriff-is-the-devil show in any great numbers.

The series aired on CHANNEL FOUR here in the UK with later repeats on - of course - The Sci-Fi Channel.  It has been available on DVD for years and is well worth watching. 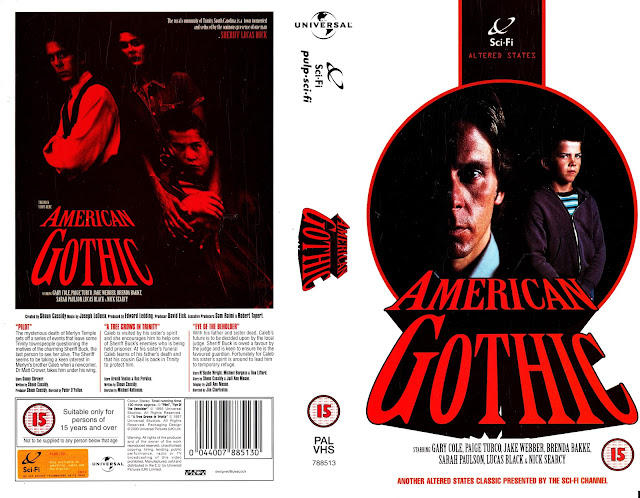