From July 1981: Luke Skywalker takes on an AT-ST 'Scout Walker' in a memorable issue of MARVEL UK's STAR WARS: THE EMPIRE STRIKES BACK MONTHLY.

The Scout Walker had been a blink-and-you-miss-it ILM bonus (no doubt one that Kenner and Lucasfilm appreciated as it allowed them to shift more toys) in THE EMPIRE STRIKES BACK so this reprint (although publication dates were so close this may have actually hit just ahead of the States) of US issue 51 is the first time we really see one in combat.

This issue also kicks off, under the new creative team of Walter Simonson (previously of Marvel's BATTLESTAR GALACTICA) and David Michelinie, one of the most memorable story acs of the era.  Pre-empting ROTJ, the comic book Empire decide that the Death Star, despite a little design flaw, was actually a jolly good idea and construct a stripped-down replacement.  A mobile super weapon called the 'Tarkin'.  I still think the producers of THE FORCE AWAKENS missed a trick by not borrowing that name for their own Death-Star-in-all-but-name super weapon.  Which would have also looped nicely back into ROGUE ONE a year later.

It seems like Marvel originally pitched the construction of a second Death Star, a storyline they assumed the film series would not revisit.  When they got notes asking for changes, they began to piece together the still-top-secret plot for the 1983 sequel.

This issue also featured Gundarks, another nice nod to the movie series itself. 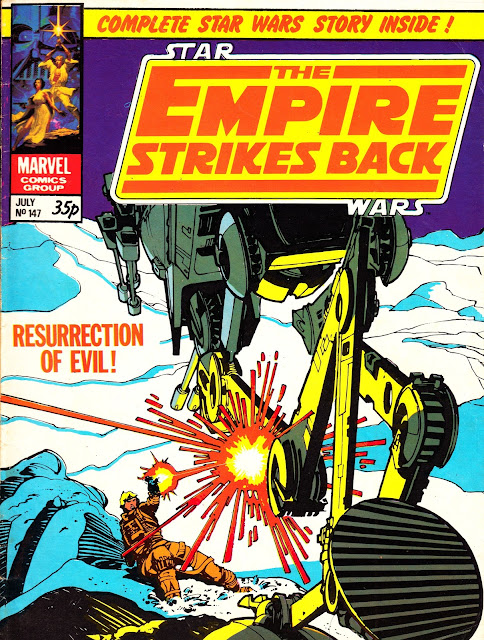