From the Age of VHS: the first regularly-scheduled BBC VIDEO BLAKE'S SEVEN tape.

The BBC had previously dabbled with some hack-and-slash compilation tapes (initially prepared for the rental or overseas markets) but - I guess - the success of DOCTOR WHO and STAR TREK convinced them to get into the game with proper, (mostly*) uncut releases.
This was an expensive time to be a telefantasy fan in need of a regular fix.  The Beeb were churning out their telefantasy shows (which also - briefly - included THE TRIPODS, STAR COPS, THE SURVIVORS and others), CIC were TREKING (a lot), Lumiere were doing THE AVENGERS, Video Gems were doing THE NEW AVENGERS, MOONLIGHTING and others and WARNER HOME VIDEO were doing V: THE SERIES.  ITC entered the market with a big selection of old ATV and ITC shows including some, like SAPPHIRE AND STEEL, that had previously been assumed to be 'lost' (IE locked in the vaults) forever.  About the only studio not in the game was Universal (bound up in the CIC joint distribution deal with Paramount). And each tape was priced around the 11 quid mark.  Daft folks like me were spending a fortune and filling a lot of shelf space.

* From (faded) memory, the first episode has a small cut to remove a weapon that the BBFC had subsequently deemed too naughty for a PG VHS.  Or - possibly - any VHS.  It seems they were cool with the overall dark tone and subject matter of the first episode of what was supposed to be a family-friendly primetime space romp. 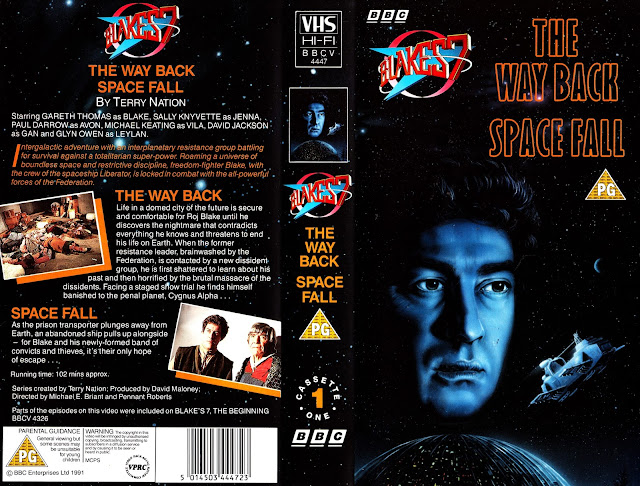