From 1999: A special 'Farewell to Roddy McDowall' edition of the American PLANET OF THE APES fanzine APESFAN.

This title - other than this issue - didn't seem to have much - if any - distribution here in the UK.  This was the only issue I ever spotted, in London's Forbidden Planet on New Oxford Street.  I don't think I ever saw it plugged in PREVIEWS so I assume it wasn't carried by Diamond.

McDowall, of course, appeared in all the original POTA movies (he sneaks into BENEATH - which he otherwise skipped - thanks to footage from the first film) and the live-action TV series.  He also hosted the excellent (find it on the DVD or BR boxsets) feature-length documentary BEHIND THE PLANET OF THE APES.  His other STARLOGGED-centric work included FANTASTIC JOURNEY and the weekly series (not the pilot) of TALES OF THE GOLD MONKEY.  He could also be relied upon to spice up any TV Movie or guest spot that he was booked for.

The next in the modern cycle of POTA films is out this summer and - across the year - there are several paperbacks and - finally - reprints of the old Marvel strips planned or already published.

fans of the original cycle should also look for the several, mostly unofficial, retrospectives that appeared alongside the 2001 reboot.  The quality can be patchy but - across the board - they are a good little nostalgia hit. 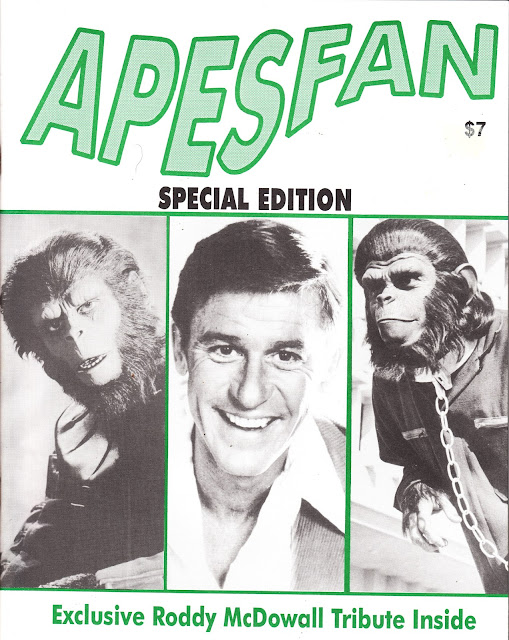 Email ThisBlogThis!Share to TwitterShare to FacebookShare to Pinterest
Labels: 1999, PLANET OF THE APES