From July 1987: ALL-ACTION MONTHLY issue 6, another cheap-and-cheerful raid on the IPC archives.

This short-runner (8 issues) dredged up old strips from the likes of TIGER and ACTION.  It looked pretty dated (Splash is the only man who can out do Jason King in the facial hair stakes) back in '87 so it isn't much of a shocker that it didn't find a readership.

Even the coverline 'The best of boys' adventure comics' was curiously old-fashioned.  Maybe they were pitching to an older, nostalgic readership (much like - ahem - STARLOGGED) but overlooked the fact that they wouldn't be browsing the bottom shelf in Martins the Newsagent anymore.

These reprint mags were a bit hit and miss in the success stakes.  MISTY and EAGLE also flopped but 2000AD (and, later, the JUDGE DREDD spin-off), WHIZZER AND CHIPS, WHOOPIE and BUSTER did much better.

The various humour mags (all of which outlived their parent weeklies) eventually consolidated into BIG VALUE COMIC (BVC) in 1995.  It didn't last long. 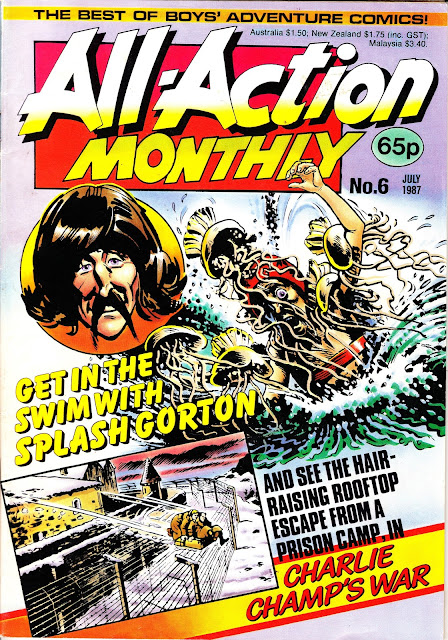 Email ThisBlogThis!Share to TwitterShare to FacebookShare to Pinterest
Labels: 1987