From 1997 (but with a 1998 cover date): Everyone (who cares to remember) remembers the numerous STAR TREK titles published under the MARVEL PRESENTS PARAMOUNT COMICS imprint but often overlooked are several other one-shots that also snuck out of the tie-up before a cash-strapped Marvel called it quits.

I think this - THE MIGHTY HEROES - is probably the most forgotten.  I only found it by chance in a 50p box a few years ago.  The characters are from a 1966 Terrytoons animated series, created by Ralph Bakshi.  The company was aquired by Viacom in 1971.  Viacom went on to purchase Paramount in 1994, hence their (brief) appearance under the Paramount imprint.

UK Star Warriors may remember seeing the cartoons (which probably cost next-to-nothing to buy) during the early years of TV-am before management twigged they could get better ratings (but annoy the IBA) by airing shows based on the latest toy lines.

I'll cover some of the other non-TREK Paramount comics in future posts. 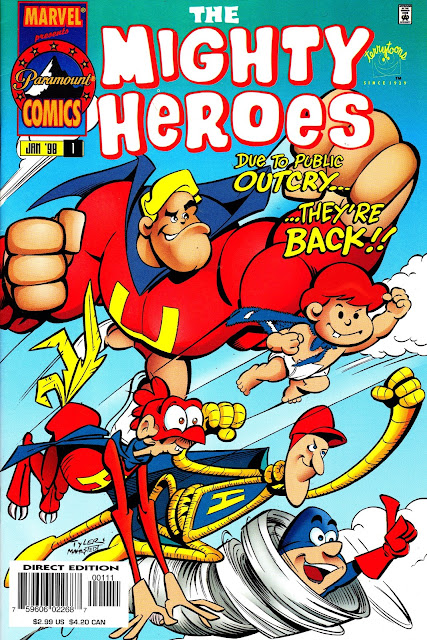 Email ThisBlogThis!Share to TwitterShare to FacebookShare to Pinterest
Labels: 1997