From 1983: a Palitoy ACTION MAN promotion, as published in EAGLE.

I was never much of an AM fan (indeed, I never owned one) but this must have marked the dying days of the big-doll-for-boys.  He was being out-maneuvered on the toy shop front line by two other Palitoy products: STAR WARS and Action Man spin-off ACTION FORCE.  The line was shuttered the following year as part of a General Mills (yup, the food people also did toys) restructure which saw Palitoy as surplus to requirements.

It's interesting to note that the 'space' and SAS figures are front-and-centre, reflecting the ongoing interest in science fiction as the Star Age continued and the popularity of the SAS in British pop culture (see also: ace action movie WHO DARES WINS) following the 1980 Iranian Embassy siege in West London.

SAS FORCE, along with traditional land army Z-FORCE, were also the major players in ACTION FORCE, particularly in the pages of BATTLE ACTION FORCE.  The more 'out there' Q-FORCE and obligatory SPACE FORCE were only drafted in when Palitoy's marketing and sales departments had some products to shift. 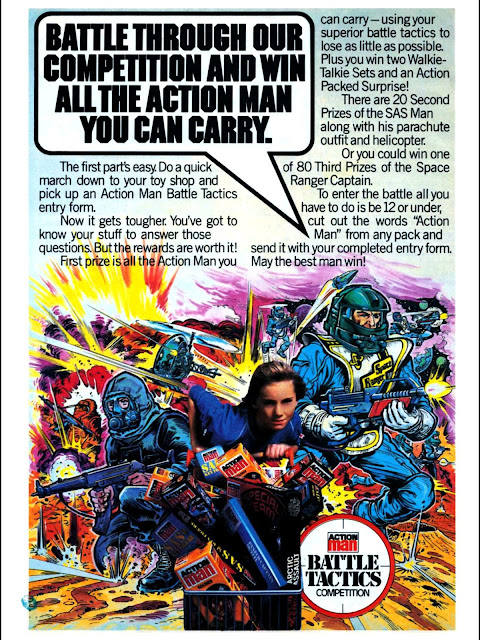