I never really understood the appeal of these two seventies throwbacks... or who exactly they were going to appeal too.  It's hard to imagine that the target audience for poster mags (surely pre-teen boys or - in the case of popular music combos - pre-teen girls) would have the remotest interest in either of these long-defunct TV shows and older fans - however loyal - would be unlikely to adorn their home with giant glossy pictures of Paul Darrow.

The very nature of poster mags is that text features (printed on the reverse side of the main attraction) tend to be a little scant in detail and - sure enough - the same was true here.  Although the B7 one did at least indulge in some original short fiction by authors fandom, at least, had heard of.

Somewhere around this time, Visual Imagination clocked up a substantial run of STAR TREK: THE NEXT GENERATION Poster Mags and its possible that Marvel UK fancied a piece of the action.

Sure enough, these soon succumbed to retrenching within the M-UK operation although this subscription advert, which filled one 'page' of each issue, continued to appear right until the end of the run. 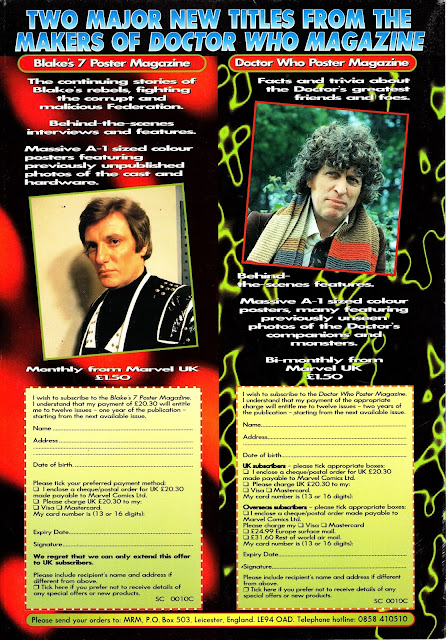