Yesterday I posted the underside, so here is a more familiar view of the centre of the BBC TELEVISION CENTRE doughnut, as snapped from the top floor.

Yesterday's picture (taken on a different day: hence the rain on the glass in that pic and not this one) was snapped through the glass surrounding the statue.

Pre-glass, and when the Centre first opened, this was a working fountain.  Depending on who you believe, the water was either permanently turned off because it made an enormous racket in the confined circular space (and made staff want a wee) OR the fountain leaked and the water trickled down into the inconveniently placed VT area located immediately below (in the space where I took yesterday's pic).

At the left of the picture is the canopy covering the entrance to South Hall.  I'll return to that area again (and again) in future posts.

The area used to be a lot greener with various pot plants and plants in the brown areas around the statue.  These had - presumably - been removed as part of the running-down of the Centre. 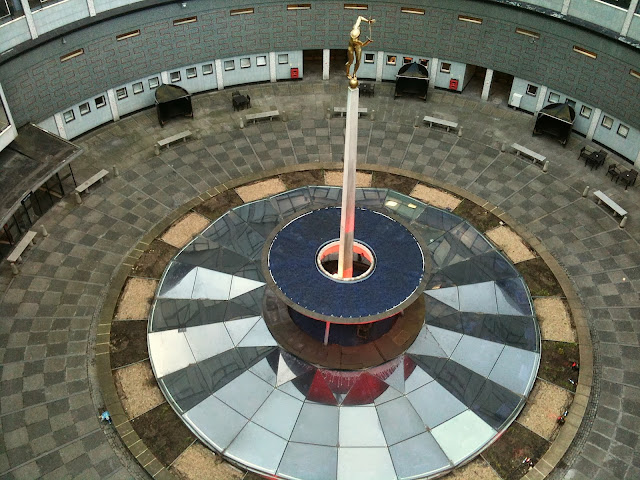