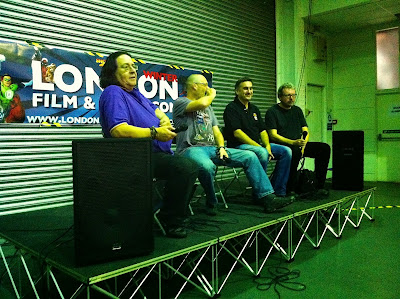 I was lucky enough to attend the REVOLUTIONARY WAR panel on Saturday which revealed a lot about the upcoming (January 2014) revival of the GENESIS 92 Marvel UK sub-universe.

There were a lot of announcements that - as far as I can tell - haven't seen print before so I've included as many as I can here.  As they don't seem to have surfaced anywhere else over the weekend, I'm claiming (possibly for the only time ever!) an *exclusive* for STARLOGGED.  Hurrah!

Held at the London Film and Comic Con (Winter) at Olympia on Saturday 5 October 2013.

THE PANEL: Andy Lanning, Alan Cowsill and Glenn Dakin. (Pictured left-to-right with Conroy propping-up the speaker on the far left)

Andy and Alan are the key writers of the wraparound bookends (Alpha and Omega) and overseeing the entire project. The US editor is Steve Wacker.

Wacker wants to retain the UK feel of the original.

An undefined period of time has passed since the original sub-universe and MyS-TECH have been defeated.  In a parallel with the real events at M-UK, S.H.I.E.L.D have crossed the Atlantic, cherry-picked the heroes they wanted to work with and shutdown the rest.

The series will officially be part of US continuity because it will be produced by the US operation.

Gary Erskine will return to Warheads.

Richard Elson to draw the Alpha and Omega issues.

Mark Brooks will provide the main covers for the series.  Each issue (including Alpha and Omega?) will also have alternate covers.  Dave Gibbons will draw a Super Soldiers cover.  Liam Sharp will do a Death’s Head cover.

Dave Gibbons was slated to do a project for Marvel UK during the Genesis 92 period.

Marvel US took a year to decide to run with the project.  It was only possible because there was a hole in the publishing schedule.

Lanning says Marvel US have no expectations about the project so they have more freedom to be creative.

Whacker was familiar with Death’s Head but less so with the other characters.

The writers of each book have collaborated on the overall direction of the limited series.  Dakin: “I have a lot of freedom”.

If the series is a success, Marvel may revisit the characters (and Marvel UK continuity dating back to the seventies) again.

Lanning thinks the series is unrelated to any need to bring the characters back into print to renew copyright.

Lanning: “Sales don’t have to be spectacular” for Marvel to be motivated to reprint the original material.

Plasmer was reprinted in trade paperback form… in Spain!

Both Death’s Head incarnations will appear: “It’s a buddy movie… It couldn’t be more Death’s Head”
Posted by SLOW ROBOT at 08:12