From May 1985: A somewhat unfortunate cover (in retrospect) from Polystyle's BEEB.

This weekly was a belated attempt to get a BBC version of LOOK-IN off the ground, built around BBC talent and any BBC TV show deemed of vague interest to the target audience (hence the choice of deathly dull zoo vet drama ONE BY ONE as one of the strips).

The main differences between the two rivals was that LOOK-IN benefited from being an off-shoot from TV TIMES and therefore owned by the network of ITV local operators. BEEB, on the other hand, was published by Polystyle and not BBC Magazines (the BBC Enterprises offshoot that housed the RADIO TIMES) and therefore more arms length from the corporation. Plus: it tried to be all things to all readers and was pretty dull compared to its main rival and the other adventure weeklies of the time.

Polystyle had previously published TV COMIC, the long-running weekly which (despite a brief renaissance towards the end) they'd finally crashed into a mountain a year or so earlier.

LOOK-IN was also able to leverage its ownership to bag regular promo slots across the ITV network and helpful plugs within programmes. BEEB couldn't invade BBC airtime in the same way which left it at a disadvantage. The BBC didn't make the same mistake when it launched FAST FORWARD a few years later, giving the in-house mag copious free airtime (Fast-Fast Forward) in the critical 5.35pm BBC ONE junction sandwiched between the official end of CBBC and the start of NEIGHBOURS (except for viewers in Northern Ireland... who opted away half-way through the final bit of Children's in-vision continuity).

Launched in late January 1985, it vanished without warning after the 20th issue in early June.

Other strips included Larson-tastic AUTOMAN, THE TRIPODS (a great deal more exciting than the TV show), BANANAMAN (new strips based on the animated series based on the NUTTY character from rival DC Thompson) and - not for the first or last time - GRANGE HILL. 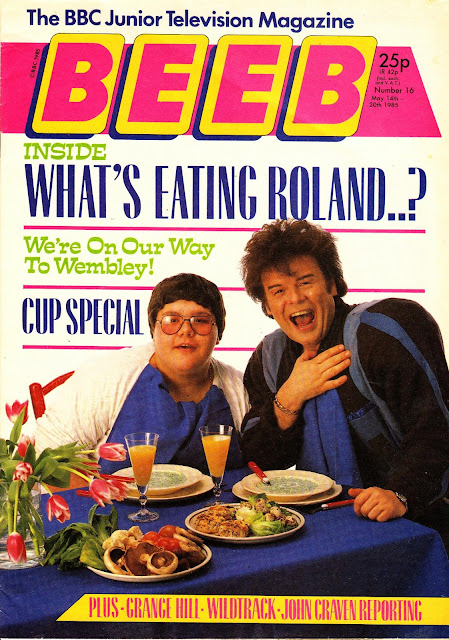 Email ThisBlogThis!Share to TwitterShare to FacebookShare to Pinterest
Labels: 1985, BEEB