From 1995: the third issue of the British STAR WARS fanzine HOLOCRON.

STAR WARS never struck me as having an active fandom back-in-the-day in the same way that STAR TREK or some of the other TV shows engaged fans to create their own 'tribute'. Maybe I just wasn't as aware of what was being created. Or maybe the sheer amount of official merchandise negated much need for anything fan-made. Or maybe SW appealed to a younger fandom who lacked the will and ability to publish in the same way that Trek fans had already been doing for a decade.

The 1990s resurgence did start to change that. Fans were obviously older and, for a while, ill-served by a mainstream media that had moved on from the saga far, far away. So titles like HOLOCRON, DARK TIMES and STAR WARS OUTSIDER appeared alongside STAR WARS MAGAZINE, GALAXY, INSIDER etc.

I would argue that the Expanded Universe was a repository for all the fan fiction that the saga had previously failed to spawn. Writers were finally let loose to nose around the universe and devote many pages to the smallest and most throwaway aspects of the movie series. And all with the endorsement of Lucasfilm.

Holocron was an A5 zine with colour stock cover (this issue being a dull shade of grey) and the standard black & white interiors. The articles ran the gauntlet of the films themselves through to the then current publishing boom. Articles of interest included a detailed looked back at the MARVEL UK original strips from EMPIRE STRIKES BACK MONTHLY from a period when no one was writing about them. 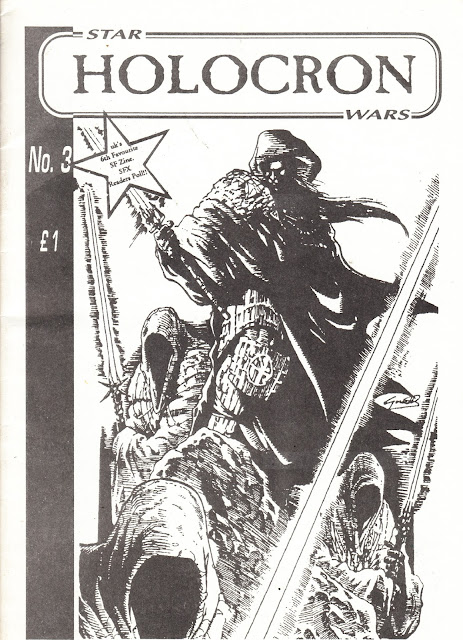