From April 1994: the first issue of the first DROIDS series from Dark Horse Comics. With the obligatory for the time cover enhancement.

Yesterday was, of course, STAR WARS DAY (4th May blah blah) and Marvel made the most of it coinciding with New Comics Day by shipping ten different SW reprints under their "True Believers" banner of $1/ 75p sampler series.

Seven of the ten were reprints of recent first issues from the second Marvel era and basically designed to make you go out and buy the trade paperback collections.

One was (yet another) reprint of 1977's STAR WARS issue one, albeit now boasting the new colouring created for the recent hardback from Marvel.

Another was a collection of recent Marvel Star Wars cover art. I didn't cross reference with the recent hardback collection of similar art but I have a hunch this may be a different selection.

And the last was the most fun... and the reason (however tenuous) for this post. They reissued the first issue of the old Star Comics DROIDS series, based on the single-season animated show from the mid-eighties. Its essentially a Dollar plug for the upcoming (June) compilation of the full DROIDS and EWOKS (which didn't generate a sampler) runs. Smart Star Warriors will recall that Dark Horse published their own omnibus compilation of the same material a few years ago.

This 1994 series, one of the first wave of Dark Horse titles before it all became too much, followed the same premise as the animated show (the twosome in "solo" adventures) but took things (a little) more seriously. One story, The Kalarba Adventure, spanned the six issue run. 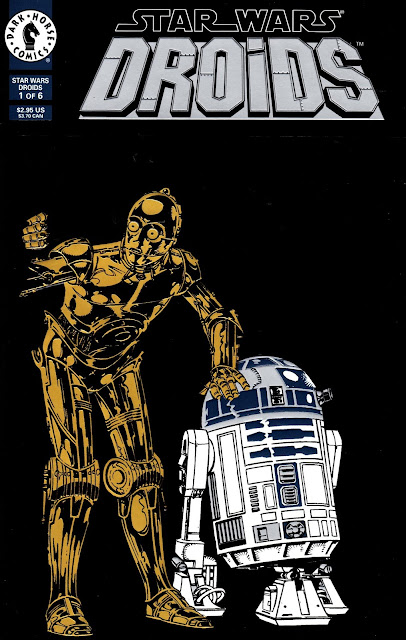