From 1989: the third, and final, INDIANA JONES ANNUAL published by Marvel UK.

Once again it was pegged to a movie release but, unlike its two predecessors, it didn't include an adaptation of that year's film.

The strip version of INDIANA JONES AND THE LAST CRUSADE had two outings courtesy of the British Bullpen: a done-in-one special which reprinted the whole thing in black & white (a fairly backward step considering London had switched to a virtually all-colour, at least in the comics, operation by this point) and a serialized colour reprint in the pages of THE INCREDIBLE HULK PRESENTS.

This annual did include some text and picture features on the film but the bulk of the contents were strip reprints from Marvel's THE FURTHER ADVENTURES OF INDIANA JONES. The two part story had, from memory, originally appeared in issues 4 & 5 of the US book. It was also the storyline that was in mid-flow when Britain's STAR WARS MONTHLY morphed into RETURN OF THE JEDI weekly. The annual was the first time the strip had appeared in the UK in colour throughout.

Why that particular two-parter? It partially took place in the UK (albeit a stereotyped version of the UK concocted by a creative team who hadn't done a ton of research) culminating at Stonehenge.

One odd thing about this book is that it appeared in both hardback and softback editions, most unusual for an annual. There is nothing to indicate that either edition was exclusive to one particular chain or distributor. The contents are, as far as I can tell, identical. 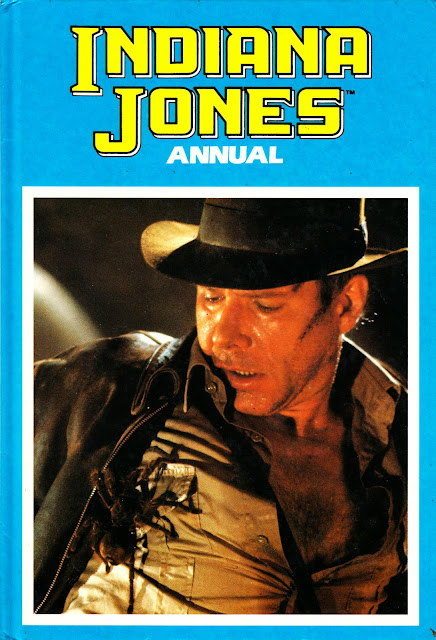