From July 1988 (and maintaining a TV CENTURY 21 tradition): the first issue of ACTION 21 magazine/ fanzine.

Published by the folks behind S.I.G, this was a nostalgic trawl through the back catalogue of Gerry Anderson comic strips, licensed from the original publishers and ITC.

The newspaper stylee covers were, of course, a homage to the 1960s Anderson comic at its imperial prime.

It was a nice idea and the print and presentation was excellent but too niche to break out into a healthy seller. It ran for ten mostly monthly issues before folding the following year.

This was only a couple of years before the full-on Anderson resurgence fuelled by the BBC's acquisition of Thundrbirds and other shows from the ITC archives. Fleetway plundered the same stash of strips to launch their massively successful THUNDRRBIRDS THE COMIC and supplemented it, to coincide with the TV scheduling, with STINGRAY, CAPTAIN SCARLET and JOE 90. 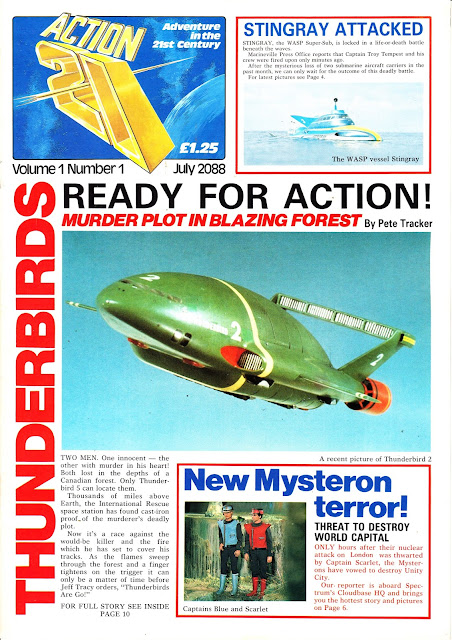