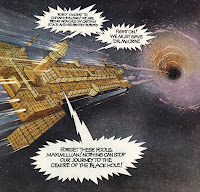 Christmas 1982 was a vintage year for movies on ITV: MOONRAKER, SUPERMAN THE MOVIE, THE MUPPET MOVIE and - the big Christmas Day offering - Disney's THE BLACK HOLE!

It's hard to over-emphasise how big a deal this was at the time.  Home video was only just getting established and, in my case, it would be a good few years before we finally got around to renting a top-loader from Granada.  I'm not even sure that Disney, initially reluctant to embrace the new format in case it ate into their traditionally lucrative business model of re-releasing films every few years to draw the next generation of fans back to the big screen, had even released the film on tape.

After the initial cinema release (and any re-release), the only way to catch a glimpse of the film was in programmes like BBC ONE's Bank Holiday schedule-filler DISNEY TIME (clips from TBH turned-up in three editions between December 1979 and May 1980) and SCREEN TEST.  In fact, I can even remember looking forward to seeing Screen Test because I knew a clip would be featured.  I also recall that the programme coincided with either our TV developing a fault or there being a transmitter fault.  Probably the former.

These days, films seem to arrive on disc, download and TV within months of them being on the big screen (sometimes less) but way-back-when, it took years for them to reach TV.  If anything, TBH seems to have been fast-tracked (possibly by virtue of its under-performance at the box office) seeing as it had only been released over Christmas 1979.

Although it didn't make the cover of the TV TIMES Christmas double issue (the only issue we would buy, along with the festive RADIO TIMES, all year), it did have pride-of-place inside... complete with some absolutely terribly artwork of the cast which - I assume - are deliberately dire although its possible ITV Publications just hired a particularly crap artist.  At least V.I.N.CENT looks right.

I distinctly recall that BBC ONE had scheduled DEATH ON THE NILE up against TBH which - in those far away days of one household TV - led to family friction over which one to watch.

My school also recorded the movie and played it, I think over two or three days, as a lunchtime "movie club" on a TV in one of the classrooms. 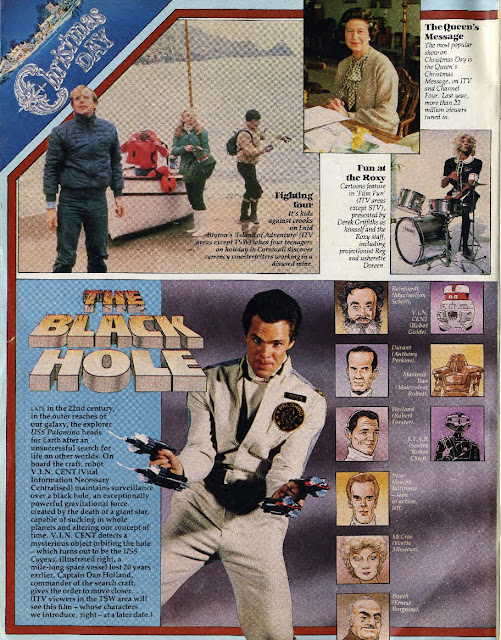 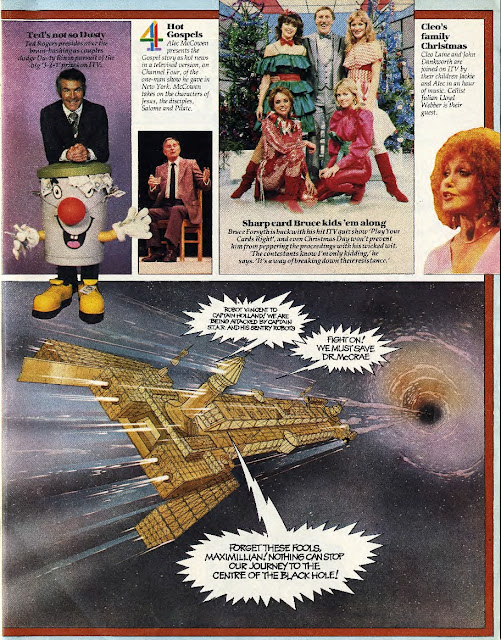 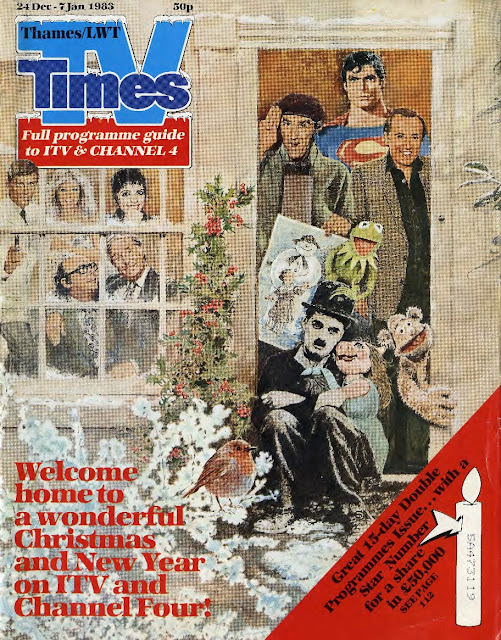