Here's a rather unattractive sight that greeted visitors to BBC TELEVISION CENTRE coming to see shows recorded in one of the studios: an ugly great slab of metal erected outside a ground floor office (pretty much next door to the considerably less protected hairdressers) in Stage Five.

Behind the tin shield was TVC's Security Office.  I never had cause to visit it myself so I can't say exactly what went on inside but I suspect they co-ordinated the various security patrols that roamed the corridors and reacted to any specific situations which required their attendance.

This part of the site could be something of an afternoon sun trap which must have made the security office pretty uncomfortable during the occasional days of sunshine.

I don't recall exactly when this screen was erected but I think it coincided with the construction of the Westfield shopping mall across the road.  The new development was built on semi-derelict land which had previously housed railway goods yards and TVC's notoriously dodgy overflow car park (basically a muddy wasteland), deemed so dangerous that female staff could request a security escort if returning to their car in the evening.

The railway yards had been the target of German bombs during the war and there was a serious suspicion that inert bombs could be disturbed - and potentially detonated - during construction.  I think someone in the BBC realised that the security office was vulnerable to any such big bang and required additional protection.  The rest of the building was hardly bomb proof either (although I suspect the glass in Stage 6, facing Wood Lane and subject to an IRA bomb attack several years previously, was tougher than the bog-standard windows used on the rest of the site) but other staff were presumably left to take their chances.

As part of the same work, a large new pedestrian gate was installed at the back of the site, adjacent to the Restaurant Block and the Blue Peter Garden which would have allowed large numbers of people to be evacuated into Hammersmith Park in an emergency.

I recall reading somewhere that if TVC was evacuated for any length of time it would take days (weeks?) for it to be brought fully back into service because it would take ages to power-up all the systems and technology and bring it back on-line.

At the beginning of this period, the BBC Broadcast playout suites for assorted BBC and UKTV channels were still housed in the wedge area located behind South Hall lifts (with the Enterprise-like Pres Control nearby on the third floor) so there would have been disruption to usual services beyond the evacuation of the studios and News Centre.  They later relocated to the Broadcast Centre on the White City site down the road.  In retrospect, another sign that TVC's days were numbered... 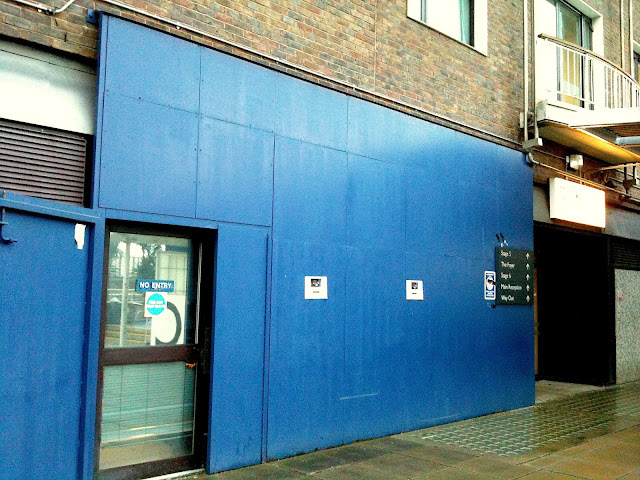