This Enterprise-alike corridor was probably the most traversed part of BBC TELEVISION CENTRE: it was the corridor which began (or ended) at Main Reception and travelled through Stage 6, Stage 5 and the Spur to the original Reception area, latterly renamed Stage Door.  Any staff or visitors who used Main Reception had to walk along this surprisingly narrow corridor.  Depending on where you worked in the building, it might take another 5-10 minutes to actually leave the building at the end of your shift.

Coming off the corridor at this end were two large open plan offices (one on each side) that housed various BBC News and Current Affairs TV and Radio production teams including Newsnight etc.  Those offices were always daunting if you had no idea what the person you were looking for actually looked like.

Looking into the distance: A service corridor fed in from the right.  On the left was the entrance to the Foyer which was a combined eating/ drinking area for BBC staff and a holding area for audiences waiting to attend a recording in one of the studios.

This area also hosted the BBC Shop which sold various BBC-branded items to staff and visitors alike.  This was a holdover from a larger chain of stores that operated as standalone units.  There was one near Broadcasting House (as I recall, they were turfed out of BH itself because of the rebuilding) and another in Kingston.  And - I know - others as well.  They were good stores and another way for the BBC to interact with the public but the economies-of-scale against the web were never there and they were all closed (with the exception of this one and some - including one in Brighton- that were operated by a different part of the corporation).

The brown door in the distance led to a small studio (TC0) which had various functions in the time I was at TVC including a dubbing suite and - later - an experimental VR suite.  I think it was also used for Children's continuity at some point.  Later I think it languished largely unused.

The corridor does a little bend to accommodate the studio and then continues on to the area that housed the WH Smith concession, the facilities management office and the audience access - up a flight of stairs - to TC8.

Beyond that... Stage Door and the main building.

Roughly where I stood to take this picture is where the dump bins that held ARIEL, the weekly staff newspaper sat.  This was an essential weekly read and pretty much the only way to find out what was going on across such a vast organisation.  It held out longer than I expected but eventually succumbed to cost-cutting. 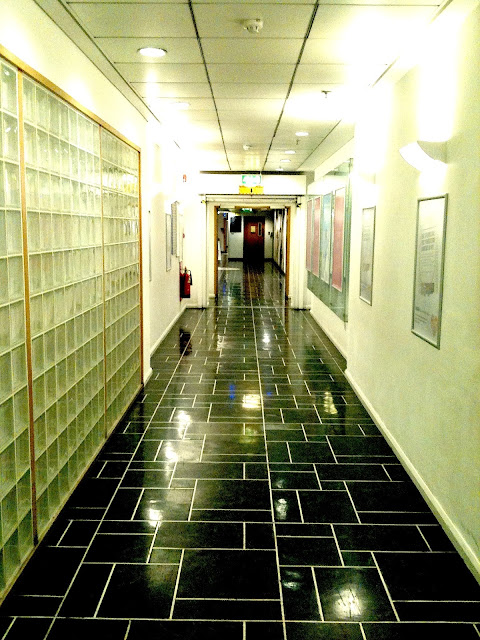