This is the third (?) and - I think - final edition of Marvel UK's BULLDOG BULLETINS, as published in the GENESIS 92 US line with December 1993 cover dates.

Once again, this British equivalent of Bullpen Bulletins was being overtaken by events as the line unraveled faster than the promotions people could keep track.  RED MIST 20/20, a crossover event launching three new books, didn't happen because all three were cancelled pre-press.  Presumably, the creative work for at least the first issues of all three must be (or was) knocking around somewhere.  As I posted yesterday, the new MOTORMOUTH series and TIME STRYKE were also no-shows.  I have no idea what TOTAL DEATH (surely the ultimate Marvel UK comic title!) would have been... but DHII was bound to figure.... 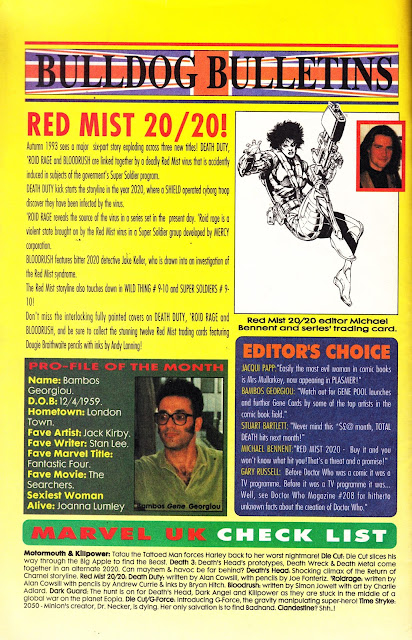