Moving inside... this was a very surreptitiously snapped picture of a virtually empty Main Reception from the final week.

This is at the very front of the (relatively) modern extension, known as Stage 6 (the naming relates to the point in the site's history that the extension was built rather than anything to do with studios and sound stages), which opened immediately onto Wood Lane.  It replaced the better known original reception, part of the main "doughnut"building, that was renamed "Stage Door" and only accessible to staff and visitors already permitted access to the site.  Anyone could wander into Main Reception.

The revolving doors were fitted sometime circa 2000 in response to a security scare (As I recall, someone was able to clamber over the previous turnstile/ gate arrangement and menace Anna Ford) and were notorious for either being out-of-order or allowing a user to enter before malfunctioning and "reversing" slowly, shoving the unfortunate user back out of the doors.  In all the years I used them, the doors never lost that vague hint of danger and unpredictability.

Facilities Management produced a "Users' Guide" leaflet explaining how to use the doors at some point.  This was picked-up in the press as a 'dozy BBC staff need guide to using revolving doors' story.  I wish I'd kept a copy of that leaflet.

Immediately above the reception was the newsroom which, across various open-plan offices, television and radio studios, housed the Corporation's domestic and international news operations.  Compared with the vast atriums and deck plans of New Broadcasting House, it was (in retrospect) pretty low key but - at the time - seemed grand.

There were times when this place was heaving, packed-full of assorted guests, contributors and members of the public arriving for programmes and tours.  Big events, like Children in Need, would mean it was particularly busy.  I never got to know any of the reception staff well but I always found them a pleasure to work with.  Always happy, smiling and professional.

This was also the scene of my one-and-only meeting with ex-Director General Greg Dyke.  It's fair to say that he was a leader that inspired great loyalty from his "troops".  I always said he was the sort of boss that would tell you you'd been made redundant but instantly convince you that it was for the greater good so you felt good about it.  On the day of his dismissal, staff spontaneously walked out in a sign of protest and solidarity.  I think the vast majority felt that the Hutton Enquiry had been unfairly critical of the BBC.  We expected everyone to be found to be partially at fault but - as the top-line results were being read out on live TV - we realised it looked very bad.  I remember someone in our office saying "this could be all our jobs" as the knife twisted deeper.

When we heard Greg had "resigned" (he was sacked), we walked out onto Wood Lane and he left Broadcasting House (it's interesting to rewatch the footage of his leaving... he departs from a side door in the BH extension which was subsequently demolished in the rebuilding work that created New Broadcasting House) to travel by car to Television Centre to 'say goodbye'.  We all followed him into Main Reception (the space was heaving) and - suddenly - the crowd parted in front of me and he stepped forward and shook my hand.  He must have shaken a million hands that day but it was an unforgettable moment.  He then went upstairs to the newsroom, stood on a desk, and gave an impromptu speech about - if I recall correctly - the quality and independence of BBC journalism.

The space will survive - in some form - as the BBC will reoccupy some of Stage 6 when BBC Worldwide, the commercial subsidiary responsible for international sales and channels, merchandising and licensing, moves in after the redevelopment.  A solitary BBC outpost in what used to be a BBC city (TVC, Centre House, the White City Building, the Broadcast Centre, the Media Centre and Woodlands as well as various ancillary buildings dotted around the immediate area housing people like BBC Technology) in West London. 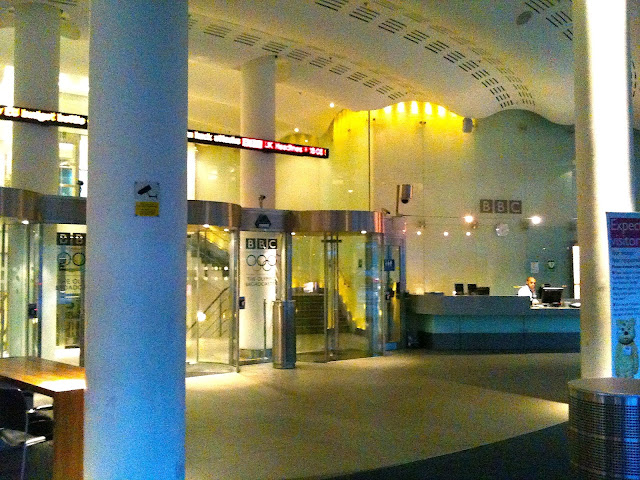