This is one thing that I found was guaranteed to surprise any first-time visitors to BBC TELEVISION CENTRE: It had its own miniature branch of WH Smith on the ground floor.

TVC was so large and - until the opening of the Westfield mall, very underserved by local shops that its (relatively) captive staff and visitors must have ensured a steady turnover.

The mini-branch was - technically - run along the same lines as one of their travel shops (airports, railway stations etc.) which meant a similar mix of magazines, cards, stationary, paperbacks, nik-naks and sweets.  None of which were stocked in much depth and, certainly in the nik-naks and confectionary categories, frequently vastly overpriced.

The travel shop designation meant that sometimes they would participate in newspaper giveaway (usually DVD) promotions... and sometimes not.  It was handy to be able to just pop in and pick-up whatever the freebie was on the way upstairs to the office.  But potentially embarrassing if someone spotted you in the lift clutching 'the wrong sort of newspaper'.

The branch occupied a ground floor space opposite the ID Card/ Facilities Management office somewhat mid-way between the Reception area and North Hall lifts adjacent to Stage Door (aka the original reception... which we'll get to).

For the first few years I worked at TVC, there was a independent newsagent located in what amounted to (or seemed to me) to be little more than a converted cupboard in the same location.  I'm not sure what was adjacent to it but the space was expanded considerably when WHS rolled-up.  I recall that there was some controversy in the pages of ARIEL (the weekly staff newsletter beloved by the media as it usually provided a juicy tale of Corporation inefficiency or mice infestation that could be regurgitated, frequently uncredited, in the press on Wednesday or Thursday) when the previous independent newsagent was ousted.  I think it would be true to say that he had a better magazine selection.

Although they slowly shuttered over time (as choice increased and staff numbers diminished), the ground floor also boasted a hairdressers, a dry cleaners (I think!) and flower shop when I first joined.  The punningly-named "Auntie's Blooms" (see what they did there?) shuttered shortly after there was a change to the expenses rules which put the kibosh on using BBC money to pay for flowers for staff and contributors. 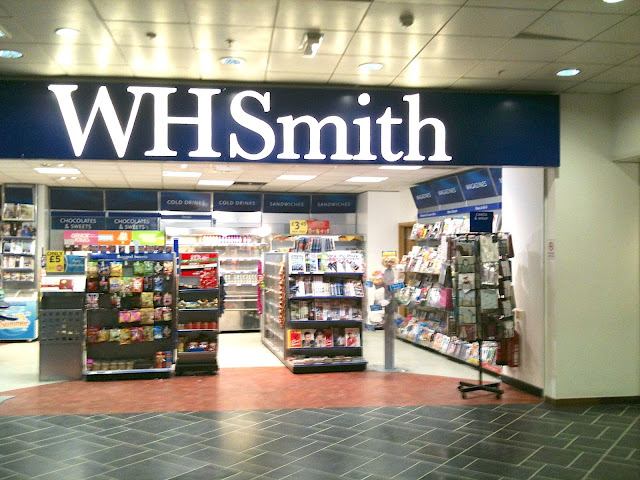